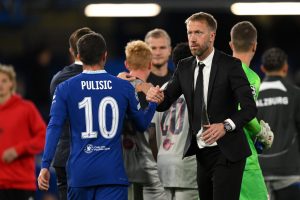 It goes without saying that all elite sportsmen and women have to be self-assured to reach such heights. Football is the biggest example of this and there have been a number of players to question Thomas Tuchel during his time with Chelsea. The German manager ruffled the feathers of USMNT star Christian Pulisic particularly.

USMNT Star Hasn’t Had the Best of Times In London

Graham Potter on Pulisic: “He has been really positive. He’s a smart guy. My conversation with him has been good, positive”.

“I’m not going to judge anybody on what’s happened in the past. I make my own mind up. Football hopefully decides”. pic.twitter.com/5NaxdhohhP

Blues fans have regularly been critical of USMNT star Christian Pulisic. The talk is that he thinks he is better than he is, but at the same time, it goes without saying that he hasn’t had a fair go of it at Stamford Bridge. Having crossed paths with Tuchel previously at Borussia Dortmund, one would assume that a strong working relationship would already be in place there.

If this was the case, it quickly dissipated if Pulisic’s recent words are anything to go by. He has a book coming out and there are some damning quotes featured in it.

“Tuchel told me that he was resting me for the second leg and as a result, I didn’t play a single minute in the Fulham game,” he says. “Then on match day of the second semi, Tuchel tells me he’s changed his mind and he’s going with Kai [Havertz].”

Of course, it is a brutal business and so tough decisions have to be made day in, day out. At the same time though, it is clear why the man from Hershey, Pennsylvania is disgruntled at the handling of it all. “I honestly was dumbfounded and very disappointed. I thought that I’d earned a start and, most importantly, he had assured me previously I was going to start.”

Read More: Fabrizio Romano: Recalling 275-Goal Striker Currently Out on Loan ‘Not a Priority’ for Chelsea

The Future of the USMNT Star

Pulisic may have outlasted Tuchel in West London, but his future could still lie away from Chelsea. It remains to be seen how prominently the USMNT star will feature in the plans of new arrival Graham Potter. The former Brighton & Hove Albion manager has now had an international break to analyse fully the players at his disposal.

Other Premier League clubs, including Manchester United, were linked to Pulisic in the summer window. A lazy link that came up was regarding a return to the Bundesliga with Borussia Dortmund, although the loss of Erling Haaland and Jadon Sancho leaves space for their former man. Pulisic is currently a Chelsea man and has the exciting prospect of captaining his country in Qatar later this year. He could quite easily depart in the coming months though!