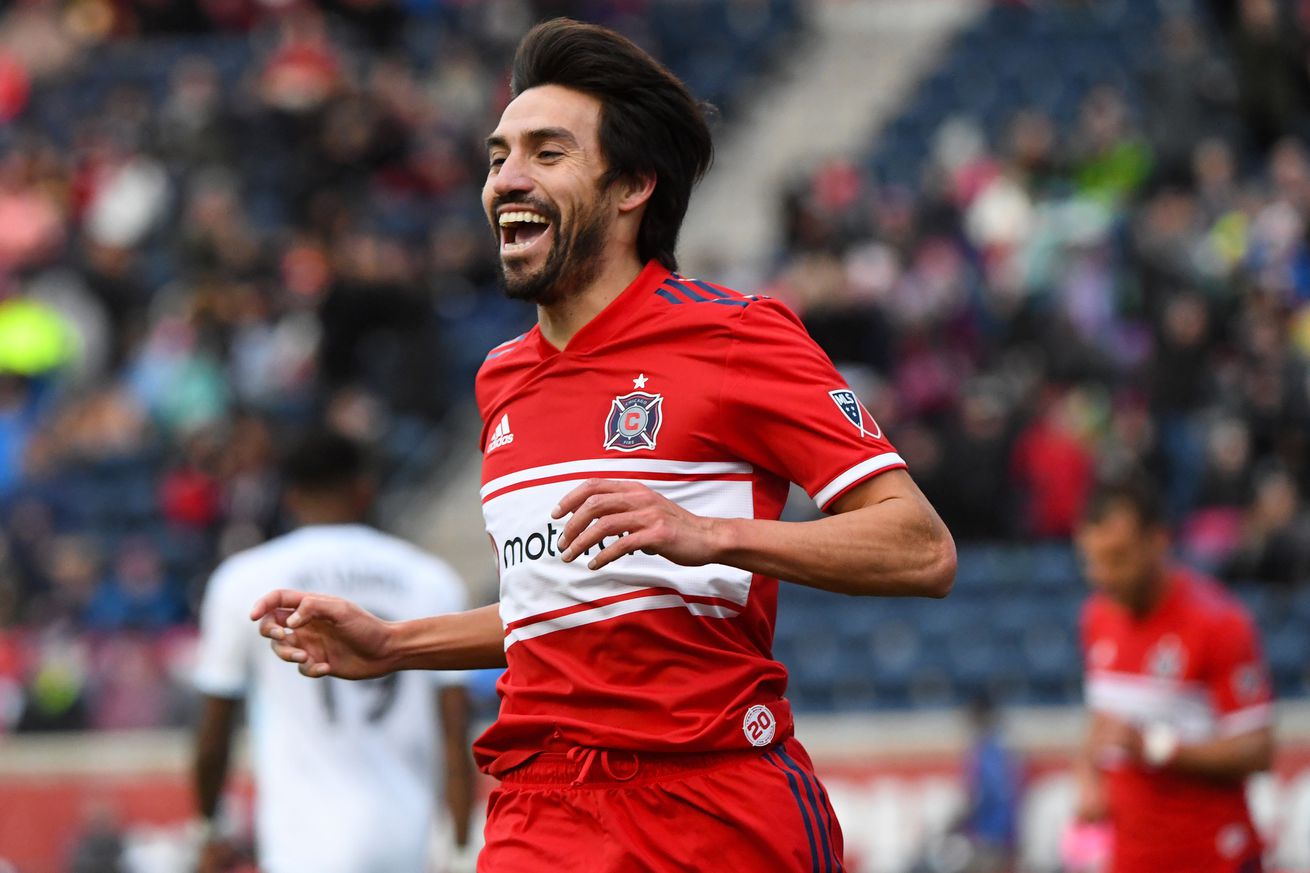 The Fire are going for their third straight result on Saturday

There are two Chicago Fire teams. The first one is the one that gives up stupid defensive errors, has no control over the events of the game, and creates few good scoring chances. The second team is the one that scores goals, plays with purpose, and knows what they’re doing.

The difference between the two can be summed up with one name “Nico Gaitán.” Taking a look at the 4-1 loss to San Jose, the first game without Gaitán, and D.C. match his impact is obvious. Against the ‘Quakes, the Fire’s passing and possession numbers were abysmal. 76% passing accuracy and a 38.5% possession number were all the Fire could scrap together in NoCal without their Argentine talisman. Against D.C. United, it’s completly the otherway around. The Fire had an 89% passing completion percentage, and were much closer to D.C. in possession with 46.6%.

They also played with more confidence. Their passing was crisper and more aggressive. Their press was confident. They knew if they forced a turnover, they were a threat to actually do something with it. In the first half, there was a five minute portion of the game, around the thirty minute mark, where DC hardly touched the ball at all.

Nico Gaitán is a difference maker. As long as he stays healthy, the Fire are in a good spot to make something out of this season.

Atlanta have fully turned it around since their disastrous start to the season. They’ve won 6 of their last 8 games, their only blemishes are to Real Salt Lake and the New York Red Bulls. There last result was a 3-0 drubbing of Minnesota United.

There’s a bit of an issue I’ve had coming up with this lineup. There is nothing saying that Johan Kappelhof is injured. He’s not on the injury report, nor is there any information on him that I can find. However, if he could play, he would have stayed in the game on Wednesday. So I did not include him in the lineup. However, if he does play, I expect the lineup to look a lot like it did against D.C.

Don’t Lose Control: I don’t mean this in that the Fire should be the team controlling the game.although that would be nice. I mean mental control. What happened against D.C. United can not be allowed to happen again. They need to keep focus for 90 minutes in order to get even a point. If they don’t, the game is going to get away from them quickly.

Get Out In Front: The Fire need to do the exact same thing they did against DC, find and early goal, and keep up the pressure. Atlanta run on confidence and momentum. The best way to get a result against them is to break them of both these traits with an early goal or two.

Control Josef Martinez: He’s their big threat and despite playing as more of a playmaker under Frank de Boer, he’s still their best goal scorer. With Hector Villaba still on the injured list, it’s imperative that he not be allowed to do anything productive on offense.

This game is tough, but I think it’s doable. Villaba being injured for Atlanta and Gaitán being healthy for the Fire certainly help matters. But for this match, it really all depends on whether or not Johan Kappelhof plays. If he does, the Fire may very well get a result. If he doesn’t, the Men in Red’s chances of getting at least a point become slim to none.

How are you feeling heading into tomorrow’s game? Let us know in the comments below!