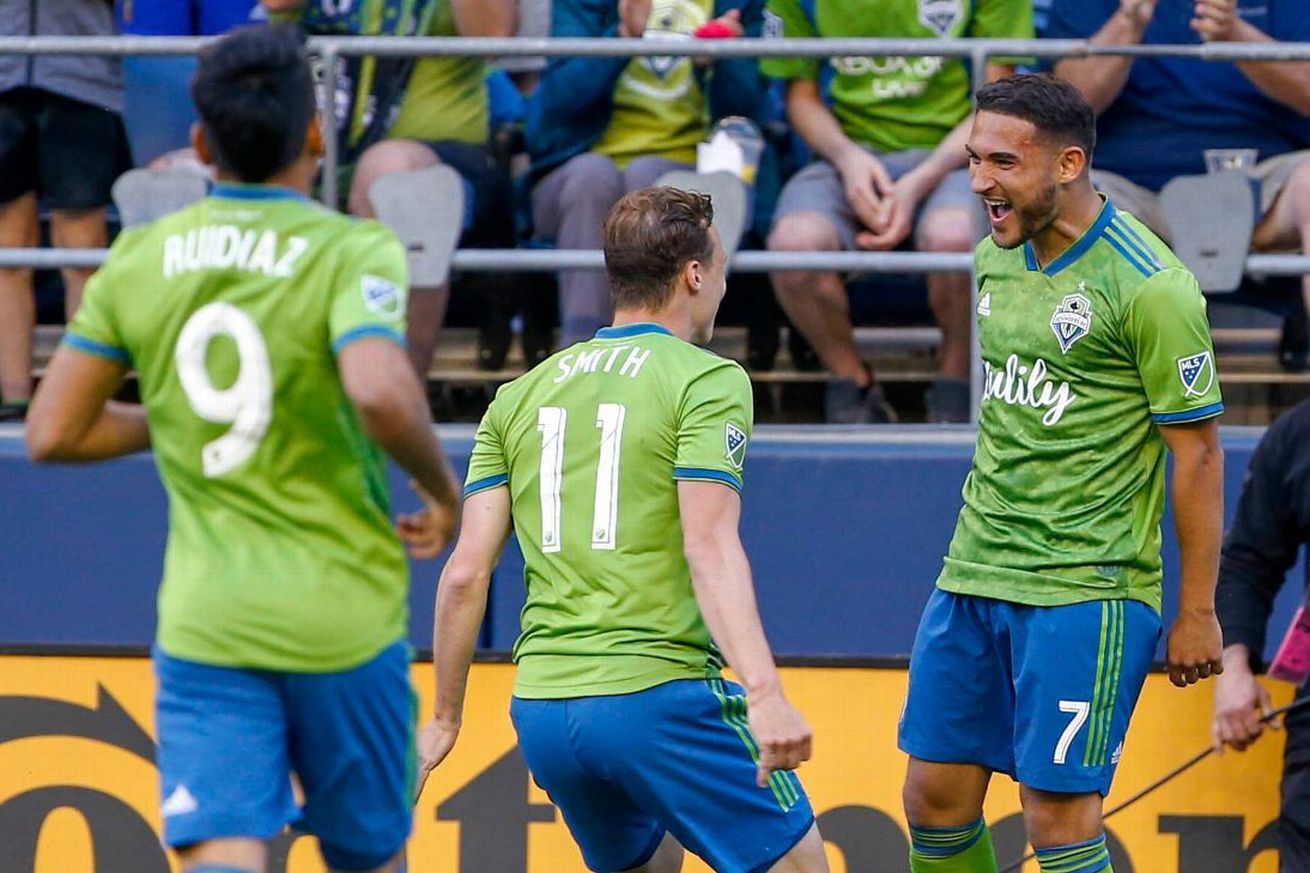 With 11 matchweeks in the books, MLS has shown once again that it’s a hard league to predict.

Columbus and Cincinnati picked up wins against hot opponents, Vancouver slowed Portland’s roll, New England erupted for three goals and a win and Colorado and Salt Lake created one of the more entertaining games of the week. Meanwhile, our Men In Red had a great week themselves, picking up a pair of wins against the Revs and the Loons.

Trending Up: Vancouver Whitecaps. After a miserable start to the season they have been showing signs of life, with their defense in particular playing very well of late. Taking all three points from Cascadia rivals Portland has them in touching distance of the playoff line.

Trending Down: New York Red Bulls. Their home field is losing its advantage quickly, as their three losses thus far are more than they’ve had in a season since 2015. Need to sort themselves out quickly, and making Red Bull Arena the fortress that it has been since 2010 is a good start.

Bonus Trending Down: Sporting KC. This season is unraveling in a hurry, and they have been winless since the start of April, with three losses and three draws. Not sure if July additions will help, this club needs to figure it out for themselves.

Don’t look now, but Atlanta is starting to round into form, led by improved play from the law firm of Martinez, Martinez and Villalba.

Josef Martinez in particular has been playing much better and with a renewed hunger, eagerly pouncing on any balls in his general vicinity and rocketing them goalward. In four of his last five games last year’s golden boot winner has recorded five shot attempts, with three goals to show for his efforts.

Atlanta opened their double game week by taking care of Toronto at home, with Hector Villalba and Julian Gressel providing the goals off a pair of Josef Martinez assists, both from inside the eighteen and through a compact Toronto defense.

It was a rough night to be the goal, as both sides routinely smashed shots into the crossbars and side netting, coming tantalizing close to beating Brad Guzan and Alex Bono. The chance of the night came on a late free kick from Pity Martinez, who uncorked a laser from 25 yards out towards the top right corner that beat Bono but clanged off the woodwork.

On Sunday against Orlando, Atlanta proved to be the far superior team, controlling a solid 62% of possession and finishing with a 10-0 advantage in corners, dictating their terms on the game all night.

Pity Martinez scored his first goal for the Five Stripes, finding the space just inside the eighteen to rip a shot past Brian Rowe to finish a clinical Atlanta counter. Like the other Martinez in Atlanta, Pity has been rounding in to form and seems to be finding his comfort level in MLS. The rest of the league should be on notice, as in the blink of an eye Atlanta is up to fifth in the East, with at least one game in hand on everyone above them in the standings.

After a busy few days leading up to the trade deadline, Columbus came out and handled a Galaxy squad that had a very strong start to the year, despite concerns that they seemed a bit one dimensional. Federico Higuain also had a great night, playing a beautifully weighted pass to set up the first goal by Gyasi Zardes, and then making a good run and use of space to score for Columbus’ second, finishing off a good pass from Zardes.

Likewise, a resurgent NYCFC was buoyed by the continued strong play of recent addition Herber, and took advantage of a few lapses by the Galaxy shortly before halftime as Herber reacted well and connected on a rebounded shot to fire home New York’s first goal in the 44th minute, and a handled ball created a penalty attempt that Maximiliano Moralez slotted home to double the visitors lead before the halftime whistle.

Zlatan Ibrahimovic came so close to making his mark on the game against Columbus on multiple occasions, first firing off a towering header that forced a superb save from Zack Steffen, then settling a cross off his chest and unleashing a volley off the swivel that blew past Steffen before clanging off the crossbar. Zlatan also had a number of chances go wanting against New York, with a goal called off for a teammate being offsides at the start of the movement, a long-range effort headed off the line by, and a gorgeous chip that beat Sean Johnson but bounce off the crossbar.

Multiple games worth of frustration may have been the culprit, but following his failed chip of Johnson, Zlatan created a physical confrontation with the former Fire goalie, throwing him to the ground by the back of his neck after Johnson bumped into him watching the ball. This kind of outburst is what has vilified the Swede at times, and should see a multiple-match ban handed down by the disciplinary committee.

In a battle between two of the Western Conference’s early leaders, both sides came to play, with this game producing end to end excitement, beautiful link up play, and numerous tantalizing chances.

Seattle, who has weathered a number of early season injuries, had a line-up that represented themselves at pretty much full strength. That this was their first-choice team showed, as they were able to attack the Houston goal through a number of different channels, with left back Brad Smith providing a number of great crosses into the box, and speedster Jordan Morris running himself into the ground to create a number of dangerous chances, and he may feel unlucky to not be on the score sheet. This is a very deadly attacking team, and their front three provide lots of matchup problems and headaches for their opposition.

In the end it was Christian Roldan’s early wonder-strike, his second in as many games, that proved the difference in this game. Roldan waited patiently to settle a headed clearance, and ripped a volley through traffic that eluded Joe Willis’ outstretched fingertips and buried itself in the top corner. Roldan’s confidence and mental awareness that he had the time and space to settle that ball and pinpoint his shot into the top of the goal is remarkable for a man who plays as a defensive midfielder, and speaks to his developing game.

For Houston, all of their key playmakers created solid chances, with Alberth Elis coming the closest on two separate occasions, missing high with a diving header and just barely losing a footrace to a ball with Stefan Frei, but their finishing let them down on the night. Houston had been leading the league in points per game, and should be able to bounce back well from this setback, as Mauro Manotas, Memo Rodriguez, Tomas Martinez and Elis have been looking sharp all season.