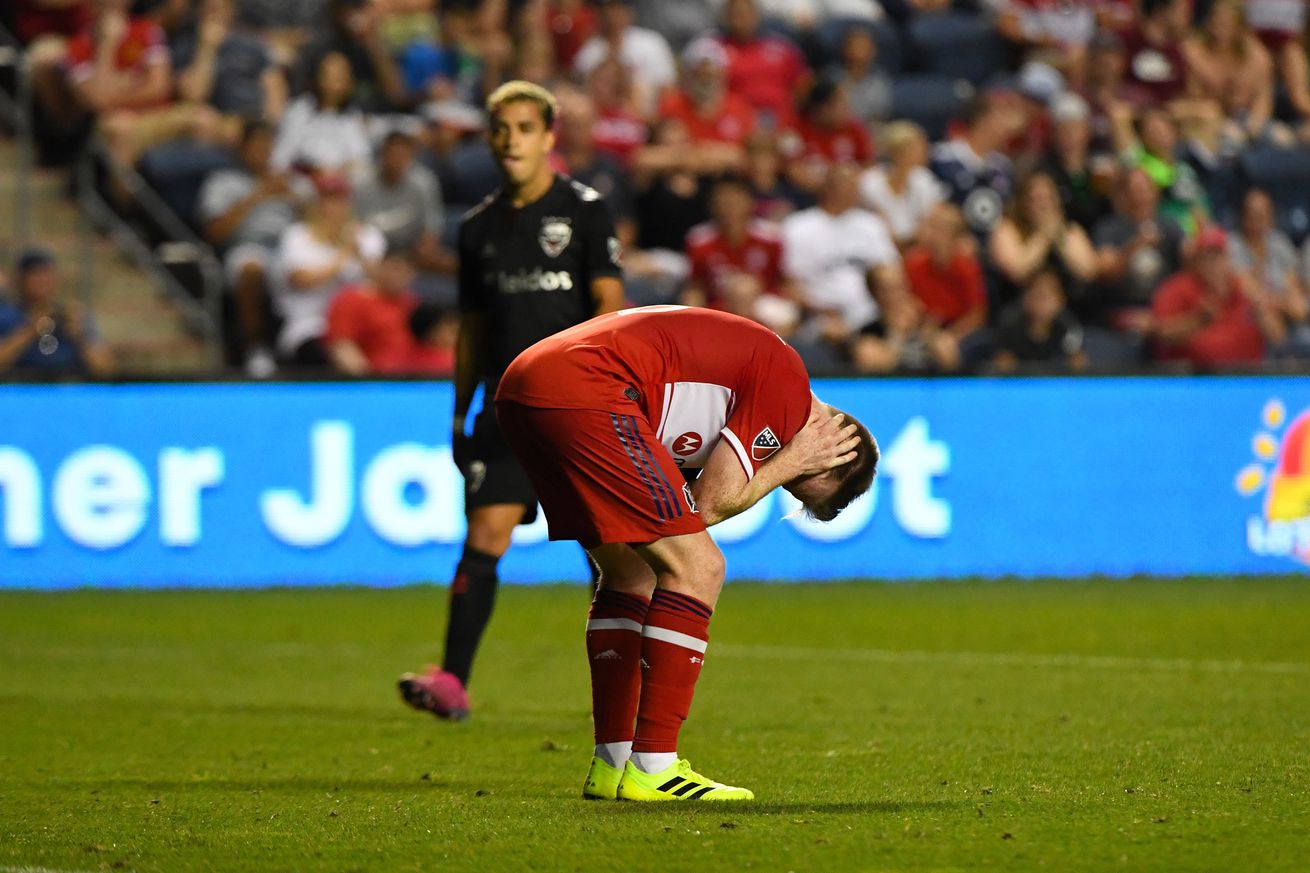 The Fire’s communications team, as well as anyone whose livelihood depends on remaining on their good side, will no doubt come up with numbers to show why this game was a net positive. A point against a fierce conference rival, with the playoff race heating up, etc. etc. Fine, whatever, but I’ve got a stat of my own.

The Fire have won two games in twelve games. The last win was earlier this month against Atlanta United. The one before that was all the way back on May 11th against Minnesota United.

I like a good point-and-a-clean-sheet game as much as the next nerdy weirdo. But you’ll forgive me if I don’t exactly call this a job well done.

So the good news is the Fire managed to not follow the usual script— start out strong, ratchet up pressure, but ultimately fail to score. The bad news is that they let DC dominate the first half. Other than a promising chance in the 11th minute that ended with Przemysław Frankowski hitting a shot over the crossbar, the Fire looked shaky and desperate while DC dominated on possession. Chicago would have another opportunity around the 27th minute off a corner kick, but that came to nothing. Otherwise, this was DC’s game through the opening half hour.

Right around 30’, Dan Kelly mentioned that the Fire have eleven games left, with eight of them against Eastern Conference opposition. He framed it to suggest that Chicago had plenty of opportunities to grab points and secure a playoff spot. Sometimes I’m really not sure if folks on the club’s payroll say this sort of thing because they have to, or if they actually believe it. I really hope it’s the former.

Back to the game. I’d hate to give you the impression that DC were, shall we say, good. Because they weren’t. They dominated possession and had better passing, but they did fuck all with it. The Fire only created a few genuine chances and had exactly one (1) shot on goal. But it was more than DC could manage. It was like the Resistible Force meets the Movable Object.

And through 45 minutes, it resulted in zero goals and a vague feeling that we were all throwing our lives away.

The second half started better for Chicago. Brandt Bronico’s blocked shot early set the tone for an opening few minutes in the half. Frédéric Brillant committed a clear handball near the penalty spot but the penalty wasn’t awarded. Instead, the Fire won a succession of corner kicks that allowed them to exert more pressure on Bill Hamid.

At length, the energy of the game— such as it was— evened out and DC started to reassert themselves. Wayne Rooney nearly gave the visitors the lead in the 67th minute, thwarted only by Kenneth Kronholm cashing in his one good deed of the day with a point-blank block.

By the 80th minute the air had been mostly let out of the game’s tires. The energy in both teams dissipated and, apart from the odd counter from Chicago, very little action suggested anything other than a 0-0 draw. Dax McCarty nearly got lucky in the 85th when a pinging ball in the box landed at his feet, but his near point-blank shot went amiss. Other than that, the only real moments of excitement came when Kronholm sauntered way off his line and outside the box with DC players within striking distance, because… I don’t even know anymore.

The game ended with Amando Moreno getting the ball on the edge of the box with a clear sightline at goal, and hit it… into Section 8. Fitting for this game, and this team. 0-0.

Other than the point— a point that will in no way help the Fire qualify for the playoffs but might keep them out of last place, maybe— the only good thing one can say about this game is that it brings us one step closer to the offseason. And freedom. Horrible, horrible freedom.