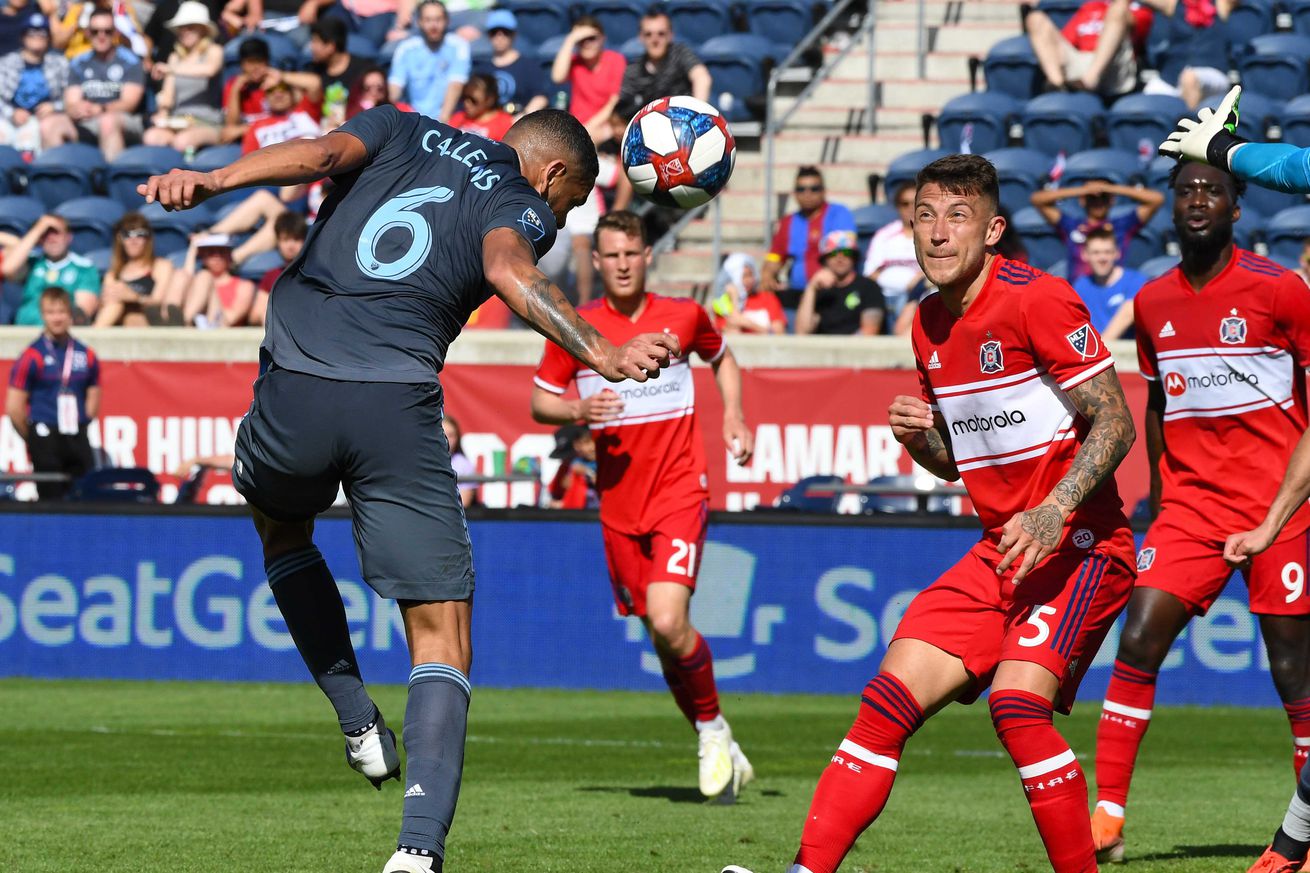 The Fire aren’t bad. But they’re not good either.

The Fire came out and controlled an NYCFC team that weren’t playing all that well. New York set up compact, to be sure, but they were half a step off it seamed for almost the entire first half. They also were playing way too narrow, with the Fire having massive amounts of space on the wing. They had only one offensive opportunity in the first half an hour. In the 11th minute, Maxi Moralez found Héber in a one on one situation with new Fire goalkeeper Kenneth Kronholm. Kronholm charged in aggressively and forced the Brazilian to try tro chip it over his head. The ball hit off the crossbar and Bastian Schweinsteiger headed it out.

The Fire’s breakthrough came in the 28th minute. A ball from Dax McCarty found Przemysław Frankowski on the right side above the box. Frankowski flicked the ball deftly toward the end line where Brandt Bronico ran on to it, who then cut it back toward CJ Sapong. A sliding CJ Sapong beat NYCFC defender Maxime Chanot to the ball, and directed it into the back of the net. 1-0 to the Men in Red.

But it wasn’t. The Assistant Referee’s flag was up on Brant Bronico’s run. The goal was called back. Except TV replays showed that he was not in fact offside. Anton Tinnerholm kept him in the play from the far side. At the last second, just before Sean Johnson could restart the game, referee Ramy Touchan signaled for VAR, and once he looked at it, he saw what everyone else saw. It was a goal. 1-0 Fire.

The lead only lasted 20 minutes, and it took a brilliant goal to tie the game back up. Toward the end of the First half, NYCFC had started to come into the game. Alexandru Mitrița found himself in a pocket of space 26 yards from goal and let rip a one timer after Maxi Moralez was able to find him out of a double team. His shot was low and powerful. It took a bounce in front of Kronholm and skipped out of his reach and into the back of the net.

The second half was a bit of a bore, with flew flashpoints. Once again VAR was needed. In the 64th, Mitrița was taken down just outside of the box, but Touchan pointed at the spot. Another VAR review ensued, and the call was corrected. The Fire wall did its job on the ensuing free kick.

Raheem Edwards was back in the lineup, and had a chance to put the Fire in front in the 68th minute. A nice one-two between he and Fabian Herbers was stopped by Johnson, his fourth save of the day. A few years ago that would have meant a free gallon of milk for everyone at SeetGeek Stadium. But today it just meant that both teams would walk away with a point, instead of the Fire getting out with three.

NYCFC almost stole the points at the end. A miscommunication between Francisco Calvo, Edwards, and Kronholm almost ended with the ball in the back of the net. Calvo didn’t clear a ball inside the box, instead backing off to let the Fire netminder get it. However, he was unaware of Héber charging behind him. Edwards did not call out the runner, and he almost scored. Kronholm made a good reaction save at point blank range to save the point.

The Fire are just an okay team.

The Chicago Fire (4-5-5, 17 points) are back at it on Wednesday on the road when they take on DC United.