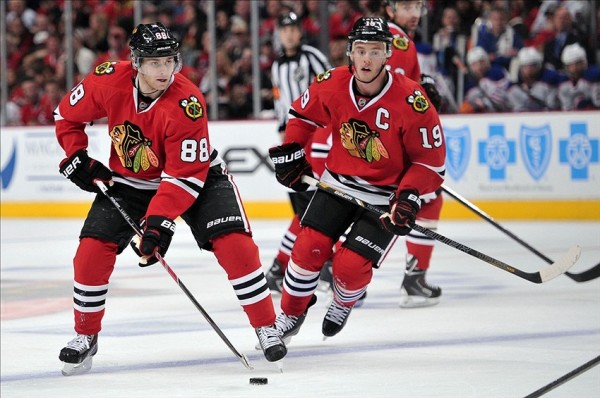 The NHL’s Stanley Cup playoffs are always an exercise in unpredictability. Presidents’ Trophy winners routinely come up short of hoisting the best trophy in sports while even 8 seeds can win it all. The NBA playoffs this is not.

But this season, with the NHL’s realignment, we are in for a brand-new treat when the Stanley Cup playoffs kick off tomorrow with a triple-header. Hated, long-time rivals will square off in the first round and top seeds will face red-hot and battle-tested foes. Frankly, I couldn’t be more excited.

Let’s take a look at this new-look playoff format, match-up by match-up.

1. Colorado Avalanche vs. 4. Minnesota Wild
For most of the season, the Avalanche looked up at the St. Louis Blues in the Central Division. That all changed down the stretch, as Colorado took advantage of the Blues’ late-season swoon. How did Colorado do it? It certainly wasn’t on the strength of one or two superstars like a lot of the playoff teams. In fact, the Avalanche have just one player in the top 30 in scoring, that being Olympian Matt Duchene.

It’s Colorado’s remarkable depth — with four players with at least 60 points and five topping 20 goals — that got the Avalanche the division title. This team is fourth in the NHL in goals per game and plays sound enough defense to be among the best in the league.

The Wild, on the other hand, are a different animal entirely. For starters, goal-scoring is not exactly the team’s forte, sitting at 24th in the NHL in goals per game. Instead, it’s defense that is Minnesota’s calling card, led by all-world defenseman Ryan Suter.

However, things aren’t that simple with the Wild. This isn’t just a good defensive team with good goaltending — it’s a good defensive team despite its revolving door in net. Josh Harding’s health issues are well-documented, and while the netminder was brilliant early on, his multiple sclerosis has prevented him from playing since December. Then Niklas Backstrom suffered a season-ending injury after playing some shaky hockey. And while Darcy Kuemper has performed admirably in 26 games, the Wild ultimately landed on the experience that is Ilya Bryzgalov.

All Bryz has done since he’s been in Minnesota is turn into one of the hottest goaltenders on the planet, helping lead the Wild to the postseason.

This should be beyond interesting, seeing strength vs. strength — the offense of the Avalanche vs. the defense of Minnesota. And if that wasn’t enough reason to tune in, the Bryzgalov playoff experience — which has not been so good in his career — should provide some fun.

2. St. Louis Blues vs. 3. Chicago Blackhawks
The Blues looked to be in the driver’s seat for the top seed in the Central and even a threat for the Presidents’ Trophy, especially after trading for Ryan Miller, but then things fell apart. Injuries and unsteady play have put them face-to-face with the defending Stanley Cup champs. The Blues are reeling, which is not where you want to be against the champs, but they do have reinforcements on the way. They’ll desperately need Ryan Miller to bounce back from an underwhelming performance since heading to the home of the Gateway Arch.

Meanwhile, the Blackhawks are limping into the postseason as well. This isn’t the same squad that went streaking a year ago. However, they are still champs, the team with Kane and Toews and Sharp and Keith and Seabrook. You can never count them out.

And while both teams have faded a bit down the stretch, this is another case of strength on strength. Chicago finished second in the NHL in goals per game, while Blues were second in goals against. Add in a rivalry, and you have yourself the makings of a great series.

1. Anaheim Ducks vs. 4. Dallas Stars
Truth be told, this looks to be the most uneven match-up of the entire first round. That may or may not be fair to the Dallas Stars, but top to bottom, the Ducks have been better pretty much all around. Led by Ryan Getzlaf’s MVP-worthy season (if it weren’t for Sidney Crosby), the Ducks finished with the most points in the West behind an NHL-leading 3.21 goals per game while also sitting at ninth in goals against.

And while this may look like a mismatch on paper, it’s important to note that the Ducks are top-heavy. Beyond Getzlaf and fellow star Corey Perry, Anaheim does not have many point producers, putting the onus on the stars to carry the squad.

That could play into the hands of Dallas, who has its own lethal one-two punch in Tyler Seguin and Jamie Benn. Add to that the strong play of Kari Lehtonen in net, and we could be in for a surprisingly tight series.

2. San Jose Sharks vs. Los Angeles Kings
Here we have yet another face-off between offense and defense. The Sharks, the perennial bride’s maid of the West, are among the best scoring teams in the NHL, led by the three-headed monster of Joe Pavelski, Joe Thornton and Patrick Marleau, all in the top 16 in scoring. Here’s the thing — it’s not just San Jose’s offense that’s impressive. The Sharks are also fifth in the NHL in goals against average, with Antti Niemi playing the type of hockey that won him a Cup in Chicago. The Sharks are about as complete a team as there is out West.

Of course, you have to score to win, and no team in hockey is better at stifling the opposition than the Kings. LA surrenders barely over two goals a game thanks in large part to the remarkable goaltending of Jonathan Quick and stout defense of Drew Doughty, Slava Voynov, Alec Martinez, Willie Mitchell, et al. On top of that, the team is full of two-way players, none better than Anze Kopitar, the team’s leading point producer and best defensive forward.

The Kings have enough scoring with Kopitar, Jeff Carter and Justin Williams, not to mention playoff veterans Dustin Brown and Mike Richards, to beat anyone with that defense and Quick in net. This should be a dandy.

Reverend Paul Revere, aka Joe Boland, is a sports blogger out of Philadelphia whose life revolves around sports 365 and a quarter days per year. Keep up with Rev at his own personal blog, The House That Glanville Built and on Twitter.

The post Welcome To The New NHL Stanley Cup Playoffs appeared first on .