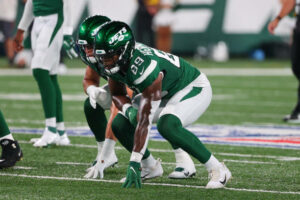 Going into the 2021 NFL season, the Minnesota Vikings knew they would have a fresh set of faces taking over at the tight end position after a long-time figure in the organization moved on the off-season. After Minnesota and veteran tight end Kyle Rudolph parted ways this offseason, paving the way for him to sign with the New York Giants as a free agent, that opened the door for Irv Smith Jr. and Tyler Conklin to take things over at tight end moving forward for the Vikings.

Following the three-game preseason schedule, however, Minnesota will have to search for others to step up on the roster at tight end with Smith expected to miss some time due to injury and Conklin yet to play in a game while battling from injury.

Over the weekend, news broke that Minnesota’s likely starting tight end Smith had suffered a meniscus injury, which is expected to sideline him for the start of the regular season schedule once he undergoes surgery to repair that injury. The news of Smith now sidelined is tough for the Vikings and their third-year tight end, mainly due to him expected to take on a starting role and an expanded role in the offense in 2021.

#Vikings starting TE Irv Smith Jr. is expected to undergo surgery for a meniscus injury that will sideline him for at least the start of the regular season, per sources.

Exact timetable TBD for now, but Smith seemed poised for a breakout season and now it’s on hold.

The injury concerns at tight end don’t stop there though for Minnesota, as the backup tight end Conklin has already missed the entirety of the preseason while dealing with a hamstring injury. Conklin did return to some activity this week during practice and there hasn’t been an announced timeline for how much time, if any, Conklin might miss or if he’ll be ready for the regular season opener against the Cincinnati Bengals.

Regardless, having Conklin listed on the injury report as questionable for all of the preseason while not having him see any time on the field before the Week 1 contest on Sept. 12 isn’t an ideal situation for the Vikings.

Other Options At the Position

Without Smith and potentially Conklin within the offense for at least right now, Minnesota is put in a tough position at the tight end spot to open up the new year. After rookie Zach Davidson was cut on Tuesday, the lone player that was left on the depth chart behind Smith and Conklin was Brandon Dillon, a player who doesn’t have really any experience in the NFL.

Dillon, an undrafted tight end who is in his third season with the Vikings in 2021, has played in four games in his career and has just one reception for a total of six yards. He did play in all three preseason games for Minnesota, hauling in five catches for 50 yards and one touchdown, recording an average of just 16.7 receiving yards per game.

Dillon was the only healthy tight end left on the roster until Tuesday afternoon, when news broke that the Vikings traded for New York Jets tight end Chris Herndon, a 25-year-old entering his fourth season in the NFL. Over his career in New York, Herndon has appeared in 33 games, totaling 71 receptions for 796 yards and seven touchdowns. His best season came in 2018 during his rookie campaign when he finished with 39 catches for 502 yards and four touchdowns, all career-best marks to date.

The #Vikings have acquired TE Chris Herndon (@Chris_Authentic) in a trade with the Jets.

On Wednesday, Minnesota also claimed former Jacksonville Jaguars tight end, Ben Ellefson, on waivers, a player who will add to the depth of the position after completing his rookie campaign in Jacksonville in 2020. Ellefson finished his rookie season appearing in seven games and starting in four, hauling in just one catch for 10 yards.

On the day the Vikings lost TE Irv Smith for the season, they also claimed former Jaguars’ TE Ben Ellefson on waivers.

The Vikings already knew they would have a shake-up at tight end and some new faces taking over that position when the 2021 campaign kicked off, but they will rely heavily on some new players this season while waiting for Smith and potentially Conklin to get healthy, while also now taking a flyer on Herndon to see if he has anything to prove with a change of scenery.

The post What Minnesota Vikings Will Do at Tight End With Injuries appeared first on Last Word on Pro Football.