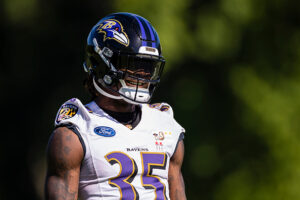 The Baltimore Ravens are going through running backs like there’s no tomorrow. After losing J.K. Dobbins to a season-ending ACL injury, the team recently lost third-string running back Justce Hill to a torn Achilles. The Ravens worked out Le’Veon Bell, Devonta Freeman, and Elijah Holyfield,but would a potential signing affect Gus Edwards and Ty’Son Williams?

How Gus Edwards, Ty’Son Williams Could Be Affected By Ravens Running Back Signing

As of this posting, the Baltimore Ravens have yet to actually sign another running back. However, with Gus Edwards and Ty’Son Williams as the only two healthy options, it’s only a matter of time before Baltimore signs somebody.

According to Albert Breer, the Ravens spent their Labor Day working out Le’Veon Bell, Devonta Freeman, and Elijah Holyfield. Bell and Freeman used to be among the best running backs in the league, while Holyfield has bounced around the league with the Carolina Panthers and Philadelphia Eagles. The team also worked out Todd Gurley a few months back, but does not appear interested in adding him to the roster.

No matter who they sign, this player will only serve as emergency depth and is not a threat for either of the top two spots. Holyfield wasn’t good enough to crack two relatively underwhelming depth charts, while Bell and Freeman are both well past their peak. Both runners were among the least efficient runners in the league last year by just about every metric. There’s no reason to believe either player will get better, as Freeman has already been cut twice in the past calendar year, and Bell can’t even get a job. Basically, there’s a reason why guys with this type of name recognition are still looking for a job in September.

Now that we’ve established why a third running back won’t steal the starting job, let’s look at the fantasy football impact for Gus Edwards and Ty’Son Williams.

Hill was clearly the third head in this running back rotation, but he was still going to get some of the touches. Whichever running back signs on will probably see a similar role, although their market share won’t be quite as high. It’s going to take time for the new player to learn the offense, and they’re probably not as good as Hill anyway.

Prior to the injury, I had rushing percentages split 60/30/10 between Edwards, Williams, and Hill. Now that Hill’s out of the way, that split is probably going to be closer to 63/32/5. This won’t move the needle too dramatically from a rushing standpoint, but it could make a difference in the passing game.

Gus Edwards is a fantastic runner on a per-touch basis, but he is not a threat in the passing game. Lamar Jackson does not throw to running backs all that often, but I had the target percentage split 40/35/15 between Williams, Hill, and Edwards. Now that Hill’s out of the picture, most of his targets should go to Williams.

From a fantasy standpoint, Hill’s injury has essentially no effect on Gus Edwards. It does, however, make Ty’Son Williams one of the most valuable handcuffs in fantasy football. The increase in targets means that Williams should have standalone value and would be a top-15 running back if something happened to Edwards.

The post What A Potential Running Back Signing Could Mean For Gus Edwards, Ty’Son Williams appeared first on Last Word on Pro Football.