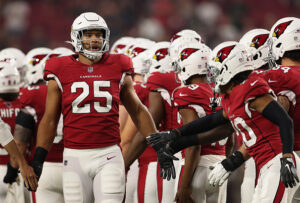 The Arizona Cardinals Week 1 clash with the Tennessee Titans will be an offensive shootout and serious test for the team’s rookies. The game is tied for the highest total points projection of the week with 52.5. Two high-powered offenses will face a pair of defenses that have questions still unanswered heading into the regular season. Pro-Football Focus ranked the Titans defense as one of the worst in the league ahead of the season, whereas the Cardinals are still facing issues at cornerback following Malcolm Butler’s retirement.

They will have two rookies play prominent roles in their season opener against the Titans. Arizona’s defensive reshuffle will see starting roles for Collins and Wilson against Tennessee.

Zaven Collins, Arizona’s first-round selection in this year’s draft, was anointed as a starter on draft night and will take charge of the defense for the first time this weekend. However, the projected involvement of fellow rookie Marco Wilson, a fourth-round pick, has increased dramatically following the Butler news. We examine what awaits Collins and Wilson against Tennessee in the season opener.

As the starting ‘Mike’ linebacker, Zaven Collins will be, in only his first NFL regular-season game, the De Facto quarterback on defense. The former Tulsa standout will be at the forefront of Arizona’s attempts to dampen what are the two most effective components of Tennessee’s offense: the run game and the play-action passing game.

Derrick Henry is the absolute best the NFL has to offer at running back. Henry’s size and power have catapulted him to NFL superstardom. Despite his size and apparent archetype as a between-the-tackles power-back, Tennessee runs a tonne of outside zone concepts. The core principle of the outside zone run scheme is to negate the effect of the opposition’s defensive line. By exploiting their downhill rush, the back can get around and away from the bulk of the defense.

The Cardinals have reinforced their D-line by bringing in perennial All-Pro J.J. Watt, but, against Tennessee’s run scheme, it will fall upon Zaven Collins and Arizona’s linebackers to shut down Tennessee’s most effective run plays. Collins’ ability to read offenses and utilize his freakish athleticism to make plays earned him a first-round selection. Collins has the sideline-to-sideline speed and, perhaps more importantly, the size to take on Derrick Henry in the hole. Granted, he will need help. Isaiah Simmons and even the shunned Jordan Hicks will have to contribute to stopping the Titans on the edge, but Collins will be at the core of any attempt to deal with Derrick.

Ryan Tannehill has reinvigorated his career on the back of the play-action game. Last season, the Titans ran 12 personnel (2 WR, 2 TE, 1 RB) more than anyone else in the league. Owing to the potency of Tennessee’s rushing attack, the Titans successfully deploy a passing attack out of run-heavy groupings. Tennessee’s tight ends were the third and fourth-best receivers on the team in 2020. Collins may be responsible for one of Tennessee’s tight ends in Joseph’s man-to-man coverage scheme. In addition, he has to remain cognizant of the ever-present run threat from Derrick Henry.

Play-action often relies on the ability of the rushing threat to move the middle linebacker; Collins may define the effectiveness of Tennessee’s play-action game. Being effective at the core of Arizona’s defense against the pass whilst also keying on the run is a tall task for Collins, yet, gives him the perfect opportunity to display why the organization tagged him as an ‘Alpha’ during the draft process.

Marco Wilson has ostensibly gone from special teams contributor to starter in a matter of weeks. The rookie has earned the promotion with his stellar displays in the off-season. However, the Cardinals will be wary of Wilson’s relative inexperience, thanks, in part, to recent history. In his first season, Byron Murphy endured a Welcome-To-The-NFL moment facing up against then-Falcons receiver Julio Jones. With Jones now suiting up for the Titans, Arizona would be wise to protect Wilson, although he will also be given a chance to shine.

The Cardinals need an outside corner, but fans shouldn’t expect to see Wilson out there. Byron Murphy and Robert Alford will likely man the two starting spots for Arizona. Wilson will see time in the slot, and therefore even in Arizona’s base defense. However, given Tennessee’s tendency towards 12 personnel, Arizona may opt for additional safeties or linebackers, with Wilson seeing time against 11 personnel. Still, Vance Joseph has spoken on his affinity for ‘Quarters’ zone coverages against 12 personnel sets, where an additional defensive back like Wilson is vital.

He will likely still see the majority of his playing time in his original special teams role. Yet Marco Wilson will also play a key role on Arizona’s defense. Week 1 presents a challenge for Collins and Wilson against Tennessee, where the game will be ultimately won or lost on defense for the Cardinals Week 1.