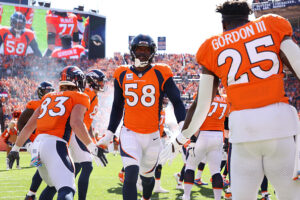 Even as he ends his time with the Denver Broncos and begins a new story with the Los Angeles Rams, Von Miller will always be considered a ‘sack master’ with that inimitable sack dance. His 110.5 regular-season sacks are proof that the Broncos made one of their best decisions ever by drafting him second overall in 2011. He is a certainty for Ring of Fame induction, and likely to be a Hall of Famer.

Von Miller Will Always Be Remembered as the Sack Master

Among the numerous honors, he was given as a Bronco, his greatest was being named Super Bowl 50 MVP. As Aric DiLalla says, he was “the driving force behind Denver’s third world championship,” so it was a title much deserved. Miller’s immense production makes him the franchise’s all-time leading sack artist, and he will likely remain that for years to come. As painful as it is for fans to let him go, his exit was impending for quite some time. It was a natural progression – time for Miller and the Broncos to go their separate ways. It wasn’t at all a surprise that the Rams offered up 2022 second-and third-round picks for one of the best pass rushers the NFL has ever seen.

A true champion with a big heart, Miller showed his gratitude to the franchise by thanking 50 players and personnel, by name, in a heartfelt video.

Von Miller thanked—by name—more than 50 Broncos players, coaches and staff in a series of videos filmed at his home this afternoon by the Broncos’ digital team.

At every level of organization, @VonMiller had meaningful personal relationships built over his decade with the team. https://t.co/Di5LkUr7aY

Miller’s Nuanced Technique Was a Game-changer

Miller’s timing was always admired. It took him tenths of a second to race off the line of scrimmage, he would time his jumps precisely with the snap of the ball. He had an absurdly quick way of bending under a tackle to get at the quarterback. He could alter a game’s trajectory with a third-down sack or tearing the ball away. According to DiLalla, all you had to do was turn away for even a moment and risk missing a game-changing play by Miller.

Miller was a constant mismatch in all his 142 games across 11 seasons. He posted double-digit sacks in seven of his first eight seasons, including a five-season stretch from 2014-18. Along with 110.5 sacks, he posted 26 career forced fumbles. He earned three first-team All-Pro nods and eight Pro Bowl selections. His unanimous selection to the NFL’s 2010s All-Decade Team was the ultimate compliment to his stellar play that spanned a decade.

The Moves That Defined Von Miller

The 2015 postseason was his crowning achievement, for a series of games that earned him national recognition. He pummeled Tom Brady and Cam Newton with five sacks, six quarterback hits, an interception, and two forced fumbles. His performances during the AFC Championship and Super Bowl 50 were unfaultable. Could the Broncos have won their third Super Bowl without him? Highly doubtful.

Even though Denver couldn’t reach the same heights in the years that followed, Miller still had moments where he played as if he was still in his prime. He believed that 30 sacks in one season were achievable. Guaranteeing that they would “kick [Arizona Cardinals] ass”, he delivered with two sacks and two forced fumbles on primetime TV. He recorded 11 multi-sack games post Super Bowl. Against the Indianapolis Colts in 2016, his strip-sack clinched the game. In 2018, he reinforced his dominance with three sacks and two forced fumbles against the Seattle Seahawks. A late interception on Philip Rivers secured a win against the Los Angeles Chargers. Miller’s strip-sack of Newton remains one of the most played highlights in Broncos history.

As Miller moves on, fans will never forget the flawless way he played, nor his unique personality. He was in many ways the face of the franchise and for some, he will always be a Bronco.

The post Von Miller Will Always Be Considered a Sack Master appeared first on Last Word on Pro Football.