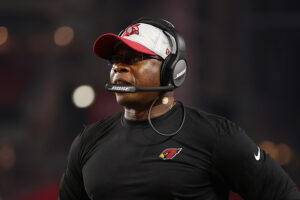 An unstoppable offense. The best running back in the NFL. A Hall-of-Fame wideout. The Tennessee Titans ruled the ‘Pick-Ems’ heading into their Week 1 clash with the Arizona Cardinals. Unfortunately, Arizona’s defense had no interest in predictions. The Cardinals crushed Tennessee’s offense in every facet of their game, dominating a team renowned for its physicality. Vance Joseph put together a game plan that took care of Tennessee’s best concepts, with his players executing excellently on the field.

Standout performances garnished a statement display for the new-look Arizona defense. Amid ongoing contract disputes, linebacker Chandler Jones returned from a lost season to re-stake his claim as the NFL’s best pass rusher. Jones terrorized Ryan Tannehill and the Tennessee offensive line all day, tying Arizona’s single-game sack record with five in what was a career day for Jones. Arizona’s defense balled, with Isaiah Simmons also quietly having the best game of his young career. Here on Victory Monday, we take a look at how Arizona’s defense stifled one of the NFL’s most explosive offenses.

The Cardinals dismantled the Titans, but Chandler Jones ruled the day. Jones may have faded from the forefront of the league’s mind after missing much of last season, but the Cardinals star returned with a bang. Opening the game with three sacks in the first quarter, Jones tied Arizona’s single-game sack record, set by Haason Reddick last year. He forced two fumbles, including one on his first sack of the day; both recoveries led to touchdowns for the Cardinals. In an all-encompassing performance, Jones reminded the league, and indeed, his own front office, that he is the apex of NFL pass rushers.

Jones’ talent was on full display. The Titans experienced first-hand the speed and length that made him a superstar. Yet defensive coordinator Vance Joseph deserves some credit for scheming Jones into the record books. After an off-season of speculation, Joseph was finally able to deploy Jones alongside his new running mate, J.J. Watt. Watt might have had a quieter game but did make some plays against the run and, upon closer analysis, played a significant role in Jones’ success.

“We’re Not Surprised. It Was Expected”

For some, Watt’s statement was a matter of fact. Indeed, Vance Joseph outlined his game plan months ago. Speaking to Cardinals media, Joseph waxed lyrical about his strategy for using Watt and Jones in tandem. Setting Watt opposite to Jones forces ‘protections to stay honest’; the line can only double-team one of them. On Sunday, Joseph saw his plan come to fruition. On at least three of Jones’ sacks, Watt drew a double team or engaged two blockers on the opposite side to Jones. With the Titans prioritizing interior blocking, Jones was left one-on-one with tackle Taylor Lewan. Lewan played in his first game since a torn ACL ended his 2020 season, and he certainly looked like his recovery wasn’t complete.  Jones dispatched Lewan, then barbequed his replacement, backup tackle Kendall Lamm, as the Titans attempted to contain him. Tennessee picked their poison in a lose-lose situation upfront, as Vance Joseph knew they would have to all along.

Simmons Came At The King And Didn’t Miss.

Jones’ performance, in addition to an exciting display on offense, meant that an excellent showing from sophomore linebacker Isaiah Simmons went somewhat under the radar. Simmons has endured some criticism this off-season, with doubts about his ability as an inside linebacker and run defender.

Holding the NFL’s reigning rushing king to only 58 yards might have his critics blushing today. Simmons led the team in tackles with nine on the day, demonstrating not only an ability but a willingness to take on Derrick Henry in the hole. He continuously outflanked the offense, poleaxing their star running back before outside run schemes could develop. He stuffed Henry mano a mano on the goal line. Henry posed a tough test for Arizona, but Isaiah Simmons had all the answers on Sunday.

Simmons didn’t just improve against the run; he shone in pass coverage too. In addition to his tackling total, he also contributed two passes defensed and an interception on a tipped ball downfield. Simmons is a skeleton key in Arizona’s defense; he can do anything and play anywhere. Joseph’s ability to disguise his defenses using Simmons was evident on Sunday. Playing in at least four different positions, Simmons caused a pre-snap nightmare for Tannehill. Whether in the slot, on the edge, or ‘mugging’ the A-gap, Simmons repeatedly disrupted Tannehill’s ability to read the defense. In turn, Simmons’ presence as a pass defender allowed Jones more time to get to the quarterback; Jones’ last sack could be considered a coverage sack.

Arizona’s defense was phenomenal in a game many expected to be a shootout. They took on two excellent wideouts and made them obsolete. They held the NFL’s best running back under 60 yards and zero touchdowns for the first time in 26 games. Stars like Simmons and Jones executed to perfection, devouring the supposedly unstoppable Titans offense. Props to Vance Joseph. He recognized what he had when the rest of the league didn’t. He let his stars be stars. 1-0. Onto Minnesota.