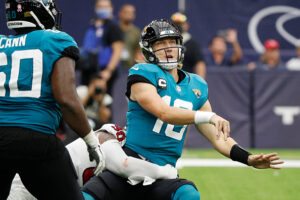 Trevor Lawrence and the Jacksonville Jaguars had a rough game Sunday, losing 37-21 to the Houston Texans on the road. The off-season is over. All speculation about what could be stops now. There is one game down and 16 to go. There are high expectations for both Trevor Lawrence and head coach Urban Meyer. Sunday’s game was a mess for Jacksonville. However, there is a larger perspective here. The Jags were a 1-15 team last season. They had the number one overall pick for a reason. Moving the needle is going to take time. Fortunately, there’s still plenty of time this season to improve. Here are some key points of this game and what the team can improve upon.

Trevor Lawrence threw 3 interceptions today in the Jaguars 37-21 opening season loss, something he never did in a game in college.

BUT…he finished with 332 passing yards, the 4th-most in a debut in NFL history. pic.twitter.com/rI6NJtJJYk

Lawrence made his regular season NFL debut on Sunday in Houston. The game ended in defeat. As you can see in the tweet above, Lawrence threw three interceptions. He also threw three touchdowns (one in garbage time), which was not nearly enough to keep pace with the Tyrod Taylor led Texans. However, Lawrence did throw for 332 passing yards. According to the above tweet, that is the fourth most yards for a quarterback in their NFL debut in history. So, while Sunday was disappointing, there is reason for optimism.

Lawrence finished the game 28 of 51 for 332 yards with three touchdowns and three picks. The game was a mixed bag. Of course there are many factors that go into a team’s performance. The Jags had bad field position and a number of penalties (to be discussed later). While Lawrence definitely had a “welcome to the NFL” game in his debut, he showed flashes of why he is the number one pick from this year’s draft. Lawrence’s best play of the game came with 1:48 left in the third quarter. He ripped off a 41 yard pass to the left of the hash and connected with DJ Chark for a score. The young rookie, who is just 21 years old, will make his mistakes this season. However, he has the arm talent and overall ability to be special in this league. Now he needs to review tape and put in work.

Penalties Showed a Lack of Discipline

The Jaguars showed an overall lack of discipline on Sunday. They ended the game with 10 penalties for 82 yards. That is not good. The team started or had to move behind the sticks too often. Brandon Linder, Jawaan Taylor, and Cam Robinson were all penalized on Sunday. Three starting offensive lineman getting penalties is disappointing, especially when you have a rookie signal caller. Penalties break up the rhythm of a game and the Jags were not able to establish a rhythm on offense or defense. Meyer and the coaching staff need to work with this young team to eliminate these mistakes.

Urban Meyer and the Coaching Staff Need to Coach Better

Yes, it is just week one. But Meyer was obviously out coached by David Culley. Meyers looked like a college coach that was not used to the NFL. The team used two of their three timeouts in the first half before the end of the first quarter. He, or someone on the coaching staff needs to get a handle of the game plan. Clock management is important. The team was also penalized for 12 men on the field at one point. Lack of discipline is not only on the players. The coaches have to instill proper technique in all areas for the players.

As mentioned, this is just one week and the Jags were 1-15 last season. While there should be high expectations for a great college coach, development and finding rhythm will take time. Will Meyer’s coaching abilities translate from college and live up to the rigor of the NFL? It’s too early to tell. Meyer’s first game as an NFL head coach was a big loss. But it will not have much significance if the team responds well to adversity. Meyer will need a good plan and ensure his team executes it better every week.

A Few Things to Improve Upon

There is of course much the Jaguars can improve upon. But here’s a few important ones: Receiver drops, almost no rushing attack, and a porous defense.

The Jacksonville receivers had six drops on Sunday. Yes, Trevor threw three picks. But the receivers didn’t make it easy for young rook. Drops, like penalties, can erase the rhythm of drives. The Jags receivers need to get on the same page with Lawrence and catch the balls thrown their way.

The Jags had a 1000 yard rusher last season in James Robinson. Yet, he only had five rushing attempts Sunday. Robinson averaged five yards a carry, with 25 yards total. As a team, the Jags ran for just 76 yards on the day. Lawrence threw the ball 51 times. This one is on the coaching staff. Do not make your rookie QB throw 51 times. Though they were behind late, the team never made a point of establishing the run in a meaningful way. That should change going forward.

Finally, the defense could not get it together. Though the Texans are without the sensational play of Deshaun Watson, Tyrod Taylor looked just fine under center. He was 21 of 33 for 291 yards and threw two touchdowns. The Jags were favored by three points, but let the Texans pull away. Penalties and missed assignments proved costly. This unit needs more time to gel together, but hopefully quickly.