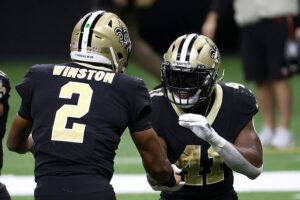 The New Orleans Saints have a lot of question marks heading into the 2021 season. This was true even before Hurricane Ida moved the team temporarily from their home. The Saints will open the season “hosting” the Green Bay Packers in Jacksonville on Sunday. Every game is important and worth the same in the standings, but some feel bigger than others throughout a season. With the NFL going to a 17-game season, what are the three most difficult games on the New Orleans Saints 2021 schedule?

A scan of the Saints schedule shows four teams that could be considered Super Bowl contenders. The Packers in Week 1, Seattle Seahawks in Week 7, Buffalo Bills in Week 12, and Tampa Bay Buccaneers in Weeks 8 and 15. Seattle has their share of questions, which keeps them from the level of the other three but they still have the pieces for contender status.

The remainder of New Orleans’ schedule features a lot of teams that will be hoping to just make the playoffs and/or not embarrass themselves in 2021. The Packers game in Week 1 would have made this list and is still a tough game, but obviously, there is a lot more on the minds of Saints players and coaches. A win could do a lot to boost the community’s morale, but a loss is certainly understandable given the circumstances.

The Saints will head west in Week 7 for a Monday night showdown with the Seahawks. Lumen Field is as tough a place to play as there is in the league, but New Orleans will be coming off a bye week. That will give them 15 days to prepare for the Seahawks. Battles against conference foes can weigh heavy for playoff seeding and both of these teams have their eyes on at least making the postseason. The teams have evenly split the 16 all-time matchups. New Orleans won the last game 33-27 in 2019. That matchup took place in Seattle. With a game at home against Tampa Bay the following week, this is a big one for the Saints.

Thanksgiving Game Against the Bills

These teams have not met often, but the last time they played was a 2017 Saints romp. Little can be gathered from a game four seasons ago. Both teams look completely different now and the Bills have an obvious quarterback advantage. This is a tough spot for New Orleans who will be returning home on short rest following road games against the Tennesee Titans and Philadelphia Eagles. The Bills will be coming in on an equal amount of rest and need to be careful not to look ahead to their Week 13 Monday Night Football game versus the New England Patriots.

As mentioned, the Saints will play Tampa Bay at home in Week 8 following the Seahawks game. That will be challenging enough but the tougher game will be a Week 15 tilt in Florida. New Orleans has won five straight regular-season matchups with the Bucs. The one that really mattered went to Tampa Bay in the playoffs last season. The Bucs rode that to hoisting the Lombardi trophy. At this point in the season, both teams will be expecting to still have their playoff hopes alive. The Bucs will be disappointed if they are not jockeying for the number one seed and a bye in the NFC.