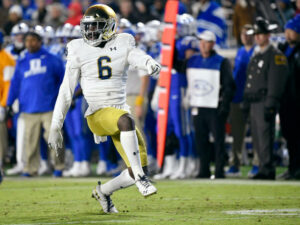 The Miami Dolphins have more NFL Draft capital than just about any other team. After knocking it out of the park with their first two selections, the team currently is scheduled to have two picks in the second round, and one in the third. Several great players fell out of the first round, which means the Dolphins should have no shortage of high-upside draft targets.

Note: Grinding the Mocks Average Draft Position was used to determine the likelihood of prospects lasting to Picks 50 and 81

How Jeremiah Owusu-Karamoah made it out of the first round is a mystery I will never understand. Widely viewed as a mid-first-round prospect, the Notre Dame product has the speed to go sideline-to-sideline, the toughness to shed any block, and the technique to bring down the ball carrier without surrendering extra yardage. While he could stand to add a few extra pounds, he’s an effective blitzer with above-average coverage skills.

Linebackers are the lifeblood of a Brian Flores defense, and Owusu-Koramoah is easily the best one left on the board. Considering the underwhelming depth on the roster, this is a no-brainer selection if he’s still there at 36. He should start right out of the gate and could turn into a perennial Pro Bowler if he adds a few pounds of muscle.

The Miami Dolphins are doing everything possible to give Tua Tagovailoa a chance to succeed at the NFL level. In the first round of the NFL Draft, the team added his old teammate in Jaylen Waddle. Waddle, Will Fuller, and DeVante Parker are a great trio of receivers, but it won’t matter if Tagovailoa spends the entire season running for his life.

Miami has one of the worst offensive lines in the league, but they still have a chance to rebuild it and create a respectable unit. The first step in this plan is drafting Teven Jenkins out of Oklahoma State. Jenkins still has some work to do with his pass-blocking technique, but he’s an absolute force of nature in the run game and has the athleticism to turn into one of the better tackles in the game. He should be able to start from Day 1 and give Tua enough time to find his talented trio of receivers.

TUC safety Trevon Moehrig is easily the most talented safety in this draft class. Projected by many as a first-round pick, the versatile ballhawk has the ability to play both safety positions and drop down into the slot. Flores is one of the most creative defensive minds in the game and can certainly find a way to make the most out of a player like Moehrig. Miami already has a good secondary with Byron Jones and Xavien Howard, but adding Moehrig to the mix would give them one of the best in the league.

If the Dolphins decide to pass on an offensive tackle with their first second-round pick, they can still get a quality player like North Dakota State’s Dillon Radunz later in the draft. Radunz doesn’t have the same high ceiling as someone like Jenkins, but he should be a league-average starter. He’s a physical mauler with solid hand fundamentals that sometimes loses his center of balance due to slower feet. However, the strength, build, and film all show that he is capable of making an NFL impact, even if he never turns into a superstar.

Tackle is more important than guard, but the Miami Dolphins still need to fix their interior offensive line. This is admittedly a weak class at guard, but there are still a few guys that have the potential to turn into long-time fixes at the position. Ohio State’s Wyatt Davis is one such player, as he is a physically dominant force in the middle with the strength to move defensive tackles and blow up linebackers in the run game. While his work as a pass blocker is a little shoddy, he has the potential to be and turn into a complete, all-around offensive lineman.

It’s no secret that the Miami Dolphins are trying to add another running back. Najee Harris and Travis Etienne both went off the board in the first round, meaning that the only premiere runner left in the draft is Jonathan Williams. Williams will definitely be off the board by this time, but the Dolphins can still get a solid football player in Kenneth Gainwell. Gainwell offers more value as a receiver than a runner, but that’s not necessarily a bad thing. Myles Gaskin proved that he can handle early-down rushing duties, so these two could combine to form a decent tandem for Maimi.

Oh yeah, and he can throw a mean block.

Wrapping up this list of Dolphins draft targets is Chazz Surratt. As previously mentioned, Brian Flores’ defense is at its best when they have multiple playmaking linebackers. Chazz Surratt isn’t a transcendent three-down player, but he’s the best you can realistically hope to find in the third round of the NFL Draft. He’s a bit smaller than the average linebacker, but what he lacks in strength he makes up in speed. The UNC product has a motor that won’t quit and the speed to blow past offensive linemen, both when getting after the quarterback and chasing down a running back. He’ll probably start off as a situational player but could turn into a starter under the right tutelage.