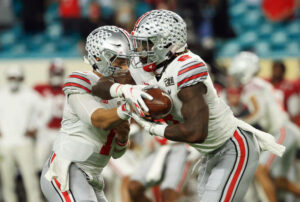 The first day of the NFL Draft is officially in the rear-view mirror, but that doesn’t mean the Buffalo Bills are done looking for impact players. Quite the opposite, actually. Finding good players in the first round isn’t THAT hard of a task, but finding diamonds in the rough is a true way to build a perennial contender. Buffalo currently has two picks on the second day of the NFL Draft, and they should have no shortage of draft targets.

Note: Grinding the Mocks average draft position was used to find players that could be realistically available when Buffalo is on the clock.

Tre’Davious White is a fantastic cornerback, but the depth chart as a whole leaves a lot to be desired. Aaron Robinson is no superstar, but he has what it takes to start in the NFL. The UCF product possesses blazing speed and agility and is capable to keep up with any receiver down the field. While he is a bit smaller than the average cornerback, he makes up for it with his physicality. As an added bonus on top, he also has the skill to line up outside or in the slot.

If Robinson is to reach his ceiling, he’ll need to work on his instincts. However, instincts can be taught as the coaching staff works on improving his football IQ. If he starts acting and stops thinking, then he could be great in both man and zone schemes and a fixture in the Buffalo secondary.

The Buffalo Bills need a running back, which means that the Buffalo Bills actually need an offensive line. Devin Singletary and Zack Moss are fine players, they just need some help getting into the open field. Quinn Meinerz didn’t go up against the hardest competition in college, but his dominant work at the Senior Bowl should leave coaches confident that his game can translate to the NFL. If he went to a bigger program, he’d probably be a late-first or early-second round pick, and Buffalo should have the opportunity to grab him at the end of the second.

If the Buffalo Bills feel the need to add a running back, Trey Sermon is probably the best choice for the job. Javonte Williams isn’t going to fall to 61, which makes Sermon the best bang for Buffalo’s buck. The Ohio State product is an absolute nightmare to take down in the open field, as his size and speed combine to make him a solid early-down running back. While some believe he has the raw potential to improve as a pass-catcher, he didn’t do it that much in college. Still, he’d be a good part of a committee and yet another weapon for this offense.

James Hudson is the exact type of player you should be taking in the third round. At this point in the draft, the odds of finding a Day 1 starter are slim to none. With that in mind, the Bills should shoot for the moon and draft a guy with a ceiling as high as anyone. James Hudson only has one year of starting experience and is incredibly raw, but he has all the traits you could ever hope for in a tackle prospect. Give him a year or two on the bench and he could emerge as a long-term solution on the offensive line.