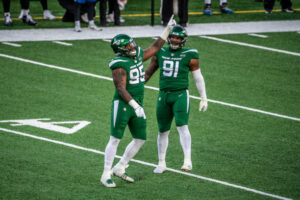 In week one of the 2021 NFL regular season, the New York Jets will match up against the Carolina Panthers. This is the first matchup for the Jets after a promising preseason. The storyline from Sunday is Sam Darnold playing his first game against the team that just traded him away. Both the Jets and Darnold look for validation right out of the gate in this match-up. The Jets pass rush is a key to victory against the Panthers and their former 2018 third overall pick.

Darnold’s time in the NFL has not been successful to date. While Darnold has had to deal with the turmoil of a shifting New York coaching staff, it’s hard to look past his inefficiency in the passing game. While with the Jets, Darnold had a 59.8 completion percentage, a 6.6-yard average pass attempt, and had never posted a season QBR of above 50. The struggling quarterback has also thrown only 45 touchdowns and an abysmal 39 interceptions in his short three seasons.

Darnold showed flashes of competency, but overall the game film supports the stats. Darnold hasn’t had a good career for a former number three overall pick. Darnold’s mentality can be summed up in the Jets 2019 week 7 loss to the Patriots. While losing 33-0 to New England, Darnold was heard saying he’s “seeing ghosts” concerning not reading the defense. A quarterback seeing ghosts is a quarterback that is easily pressured into poor decisions.

The Carolina Panthers finished the 2020 season with the 18th ranked offensive line according to Pro Football Focus. The Panthers have taken this off-season to only worsen at this position, now being ranked 31st by PFF. Guard Pat Eflien was an off-season acquisition that has had a struggling career. Resident starting guard, John Miller, had a rough start to his career and hasn’t shown much to bet on when winning in pass protection.

The only positive in this group is right tackle Taylor Moton, who has not had a bad NFL season to date.

The New York Jets are entering the 2021 season with an improved defensive scheme under rookie Head Coach Robert Saleh. Saleh brings a 4-3 defense with a heavy emphasis on a strong pass rush. Leading this group is star defensive tackle Quinnen Williams. Defensive end Bryce Huff looks to step up and make an impact. Sheldon Rankins and Shaq Lawson are off-season acquisitions that look to make immediate impacts.

Quinnen Williams is returning to the Jets for his third NFL season. In his first two years, Williams has earned himself nine and a half sacks, 20 quarterback hits, and a total of 31 quarterback pressures. The quick standout was a singular bright spot in a bad Jets defense. Williams produced these numbers in a 3-4 defense with little help up the middle, often facing double teams.

Sheldon Rankins was drafted in 2016 by the New Orleans Saints and entered his sixth year in the NFL as part of the Gang Green defense. Over his career, the defensive tackle has earned 19.5 sacks and 48 quarterback hits. With Rankins alongside Williams in the 4-3 defense, the Panthers offensive line will be forced into some tough decisions while in pass protection. These tough decisions will inevitably lead to favorable matchups for the two defensive line studs.

Strong Depth Throughout the Line

Bryce Huff is returning for his second season with the Jets at the defensive end position. In 2020, Huff racked up two sacks, four quarterback hurries, and a total of eight quarterback pressures. Huff may not have had an amazing season but has shown great improvement. The edge defender has been impressing in camps and preseason and will look to have a breakout season.

The former Buffalo Bills first-round pick was acquired by the New York Jets in a trade from the Houston Texans to cover the preseason injury of Carl Lawson. In his career, Lawson has accrued 20.5 sacks and 56 quarterback hits. He has had a lackluster career but now finds himself in the perfect situation under Saleh. Lawson enters a system that will allow for favorable matchups against the Panthers line. Lawson is in a perfect storm to have a career game.

The Jets pass rush will have a stellar game against one of the NFL’s worst offensive lines. Gang Green’s front four will have Darnold too busy scrambling to see ghosts in the secondary.

The post The Jets Pass Rush Is A Key To Victory Against The Panthers appeared first on Last Word on Pro Football.