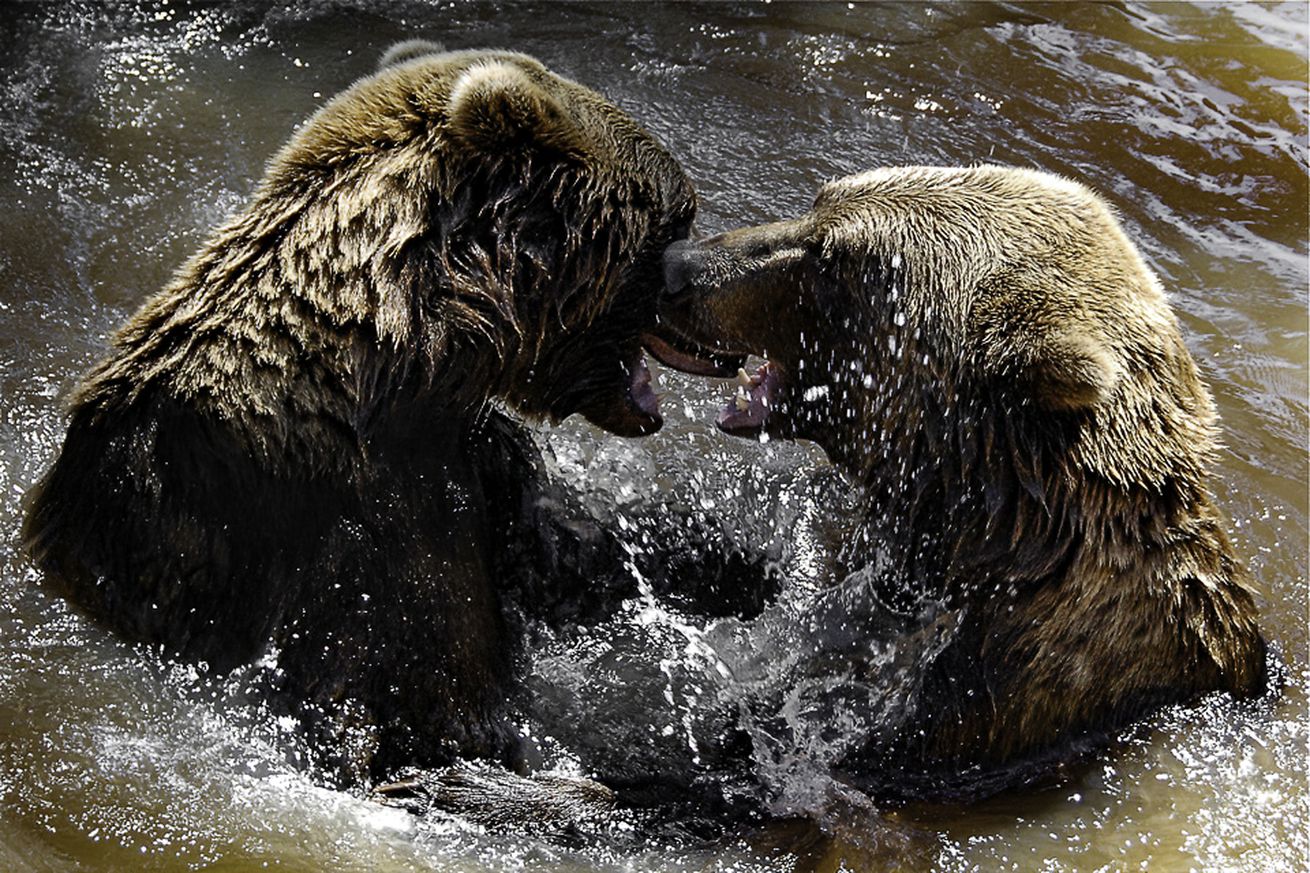 Training Camp means Bear vs. Bear, although contact is a couple of weeks away. Photo by Denmaster Ken. | Ken Mitchell

It’s Bear vs. Bear in training camp, and although we are a couple of weeks from actual contact, every rep counts.

Attention WCG Members: On Monday, August 3, SB Nation will start rolling out a fresh and modern update to their comment section that has been long overdue. The new makeover, which we are very excited about, will take effect at Windy City Gridiron on Monday, August 10, but at some point during the change some of your memberships may be affected and you’ll temporarily lose the ability to comment. If this happens you will see a prompt with an email to contact support to rectify the situation as soon as possible.

BEAR DOWN, CHICAGO BEARS, BEAR DOWN!!!!

Time for Bears QBs Mitch Trubisky and Nick Foles to show their ‘compete level’ – Chicago Sun-Times – “I love competitions,” Foles said. “But sometimes competitions, if you approach them the wrong way, become very toxic for a team … because it becomes about ‘me’ and not about the team.”

Recapping Week 1 of Bears Camp – Chicago Audible Podcast – Listen as the guys recap everything you may have missed during the first week of Bears Camp.

Mitch Trubisky vs. Nick Foles: Bears’ QB battle could be decided by one thing – NBC Sports Chicago – There’s a lot of talk, but no action, in the Bears’ quarterback competition right now. But there is one critical theme emerging for when the battle is on later this month.

The Bears are going to get creative with QB battle in training camp – Bears Wire
– With the COVID-19 pandemic, the Bears have just training camp reps to determine whether Mitchell Trubisky or Nick Foles will be the starter.

2020 Bears salary cap: Where Chicago stands this year – Bears Wire
– The Bears enter training camp with a decent salary cap situation following news of one prominent defensive player opting out of the season.

On “Opting Out”… Da Bears Blog – Tuesday, Eddie Goldman opted out of the 2020 NFL season. He wasn’t alone. He was joined by essentially the whole of the New England Patriots. So why are players punching out of this season? A few things to remember about Covid-19.

If James Daniels translates this bulk to improved play strength, he could be a legit player for the #Bears.

Daniels has the athleticism and instincts, but power has been a weakness to this point. Would be huge for their OL if he took the next step. https://t.co/miJiHpmZ3j

No excuses? Even in a pandemic, Bears GM Ryan Pace still on the hot seat – Chicago Sun-Times – The restrictions of the COVID-19 quarantine have put a crimp on the Bears’ offensive overhaul, but — unfair or not — Pace and coach Matt Nagy likely won’t get a pass for the altered 2020 season. Ken’s Note: We don’t even know that there will BE a season at this point, so all this talk of hot-seat is ludicrous.

Bills’ E.J. Gaines opts out of 2020 – ProFootballTalk – Bills cornerback E.J. Gaines is the latest player to opt out of the 2020 season.

Teams worry that opt-out privilege isn’t being used in good faith – ProFootballTalk – As one source explained it to PFT, teams are concerned that some players who think they won’t make the team are choosing to opt out and to take the six-figure stipend. While players apparently would owe the money back to the teams if they fail to make the roster in 2021, no team wants to have to chase a former player around next year in an effort to retrieve $150,000 or $350,000.

Devin McCourty: “BS” that the league wants to change opt-out deadline – ProFootballTalk – “It’s an absolute joke that the NFL is changing the opt-out period, mainly because they don’t want to continue to see guys opt out,” McCourty told reporters.

Do you want to do more officially sanctioned WCG Madden stuff? Or just enjoy the game?WCG now has an official Madden Discord server! Feel free to offer suggestions, updates, or anything to help the internet’s best Bears community have the best Madden community as well! Invite link is here.

IN CASE YOU MISSED IT ON WINDY CITY GRIDIRON

Wiltfong’s Chicago Bears 2020 Training Camp Battles – Windy City Gridiron – In this 11-part series we’ll go position by position on the Chicago Bears examining how the training camp battles should shake out for the 2020 season. Keep in mind that rosters still need to be…

Windy City Gridiron Community Guidelines – SBNation.com – We strive to make our communities open and inclusive to sports fans of all backgrounds. The following is not permitted in comments. No personal attacks, politics, gender based insults of any kind, racial insults, etc.