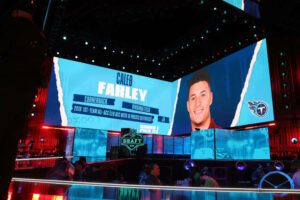 After a stellar 2019 NFL season and postseason, the Tennessee Titans took a slight backtrack in 2020. The Titans still had a great free agency as they took care of some of their biggest position needs so far this offseason. The Titans drafted eight players in the 2021 NFL Draft with five of them on defense, and now it’s time to review those picks.

Tennessee Titans 2021 NFL Draft Review: A Little Bit of Everything

The Titans addressed the most concerning position need this offseason by acquiring a solid pass rusher in Bud Dupree. In order to make the money work, the Titans had to part ways with some of their better cornerbacks. Last season, the Titans’ defense ranked 29th in the league in passing yards allowed per game (277.4) and allowed a completion percentage of 67.1%.

It wasn’t long ago when Farley was considered one of, if not, the top cornerback prospects in this 2021 NFL Draft class. Farley is a tenacious and consistent man coverage cornerback who possesses speed and superior athleticism. On March 23rd, Farley went through a microdiscectomy in his back which would prepare for the upcoming season. Shortly before the NFL Draft, Farley was diagnosed with COVID-19. This, along with the back surgery, caused Farley to slip in the Draft.

Luckily for Farley, the Titans were able to draft him with the 22nd overall pick. Farley will be the number one cornerback for a hungry Mike Vrabel defense. He will also be the most talented and youngest defensive back for the Titans this season. This defense needs to be more efficient against passing offenses as they have allowed 36 passing touchdowns this past season. The AFC South will be loaded with elite passing offenses this past season, which will require more efficiency from the Titans’ secondary.

On the offensive side of the ball, the Titans had glaring needs at three separate positions. While the Titans are looking to secure a number two wide receiver, they could not afford to pass up the opportunity for a powerful and highly efficient offensive tackle and selected North Dakota State’s Dillon Radunz with the 53rd overall pick.

Although the Titans allowed 25 sacks from this past season, which tied for 26th in the league, Tennessee needed to solidify their offensive line. The Titans only converted 46% of their third-down attempts (84-of-182). They were not able to utilize their first-round selection in the 2020 NFL Draft in Isaiah Wilson. Dennis Kelly started all 16 games for the Titans as the right tackle and is now a free agent. Meanwhile, David Quessenberry started in six games at left tackle after spending most of his career as a guard.

It isn’t clear that Radunz will get the starting right tackle position for the Titans in 2021. Radunz, however, is one of their best options. His athleticism, ability to dominate in zone-blocking schemes, and stay in assignments of pass protection make him an attractive option for the Titans in the second round.

Coach Vrabel has a specific scheme in mind for his players, but he loves players who are highly efficient and versatile. At the same time, the Titans are smart in the way they plan to draft players in the first three rounds. The Titans drafted Georgia’s Monty Rice with the 92nd overall pick. Rice is a dominant and highly efficient middle linebacker for the Bulldogs.

This decision to draft Rice was opportunistic, as the Titans needed depth and talent at the middle linebacker. Tennessee has yet to pick up the fifth-year option for inside linebacker Rashaan Evans, who was third on the team in total tackles accounted for (96). The Titans were able to re-sign Jayon Brown, who started 10 games at the other inside linebacker position, to a one-year contract.

Chance are, the Titans drafted Rice with the intention of turning him into the middle linebacker of the future. Rice is a highly productive tackler, especially in the open field. Once he is developed in his rookie year, he’ll be a reliable potential starter at inside linebacker.

The Titans secured one of the best cornerbacks in this 2021 Draft, which was the most needed position. When the Titans released Malcolm Butler, they knew it was time for a number one cornerback. They also were not able to retain Adoree Jackson (their first-round pick from 2017) and Desmond King.

In the third round with the 100th overall pick, the Titans were able to draft Washington’s Elijah Molden. He is a tough and reliable cornerback when it comes to his instincts. Although the size doesn’t give him the edge, he is a corner that wins contested passes without too much inference. The two major attributes that bring him to a Vrabel defense are his ability to recognize route coverages and his reliability to play all multiple defensive back schemes such as outside corner, inside, corner, nickel, and high safety.

He will need time to learn the NFL system and he won’t be the most effective outside corner due to his size and top speed. The Titans will be able to have Molden stretched out in schemes that will have him as an extra safety or nickel. While he may receive high stats or multiple starts in his first year at Tennessee, there is room for significant improvement.

It is a little concerning that the Titans were able to address the wide receiver concern in the fourth round of the 2021 Draft. Tennessee drafted Louisville receiver Dez Fitzpatrick with the 109th overall pick. Fitzpatrick has several great qualities as a potential starting receiver for Tennessee. Fitzpatrick is a receiver that can get open through highly efficient route running, making cuts in his running to another direction, and being physical in highly contested situations. At the same time, he doesn’t have great agility and speed and he isn’t a player that will multiple deep passing plays.

Fitzpatrick will need some time to develop in the league especially the tempo of the game. It will be too soon to demand much from Fitzpatrick but he could be installed in several packages that will fit his playstyle.

The Titans were able to secure some more position needs later in the Draft. The last two picks of the Titans’ Draft came in the sixth round. Defensive end Rashad Weaver adds depth and high talent to the edge rusher position. His highly efficient hands, moves, and high motor are great tools that will put him on the field early. He will be able to learn from the newly signed Bud Dupree in the Training Camp, which will make him even better.

The Titans were able to draft another receiver in LSU’s Racey McMath. This is a player who has potential and was often in the shadows of fellow LSU receivers Ja’Marr Chase and Terrace Marshall Jr. The Titans’ offense will be eager to see what input he will bring to the team. Finally, Tennessee was able to address the depth concerns at safety with the loss of aged veteran Kenny Vaccaro, who was released. Oregon’s Brady Breeze was a part of a highly talented Ducks’ secondary unit but his stock slipped when he didn’t play in the 2020 College Football season.