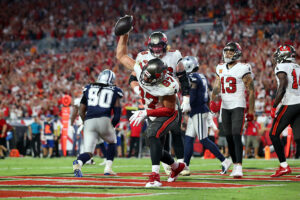 Tampa Bay beats Dallas on special teams miscues in the season opener on Thursday. Mike McCarthy and the Dallas Cowboys could only look on and hope Ryan Succop would pull the game-winning field goal wide, like Greg “The Leg,” Zuerlein did earlier in the game. This was a thrilling opener showcasing strength on strength. Despite the loss, the Dallas Cowboys are a much-improved team and have a legitimate chance against anyone in the NFL.

Dallas played a great game against the defending Superbowl-winning Tampa Bay Buccaneers. Tampa Bay struggled their first offensive drive but quickly found its rhythm scoring on their second possession. Brady struck for the first touchdown of the NFL season in the 1stquarter, finding Chris Godwin in the end zone. Dallas had a nice first drive, however, eventually resulting in a punt. Next, Dak Prescott took command and illustrated a great drive, eventually throwing a touchdown pass to CeeDee Lamb for 22 yards.

Brady answered back with a second touchdown, this one to fellow former New England Patriot Rob Gronkowski. Tampa Bay was clearly in control at this point in the 2nd quarter. Dallas marched down the field to the Tampa Bay 13 yard-line where Greg Zuerlein missed his first kick of the night from 31 yards. The Dallas kicker would go on to miss two more kicks, an extra point, and a field goal attempt from 60 yards.

Special teams miscues cost Dallas this game. The Cowboys offense played very well, securing the lead with less than 1:30 in the game. Prescott passed for over 400 yards with three touchdowns. The Cowboys defense played very well forcing three turnovers, picking off Brady twice. Dallas also forced four punts for the Tampa Bay offense. The missed field goals and missed extra point proved to be the difference in the final margin of this game.

The Cowboys and Buccaneers would continue to play back-and-forth the rest of the game. Prescott and Brady went touchdown for touchdown until the fourth quarter. Brady threw a deep pass to Godwin who would have been downed inside the five-yard line, setting up a go-ahead touchdown. Yet, Damontae Kazee made a play on the ball, forcing a fumble. Prescott would eventually drive the offense down to the Tampa Bay 30 yard line. McCarthy showed great faith in his kicker, sending Zuerlein out again. Zuerlein drilled the 48-yard field goal splitting the uprights, squelching any doubt he is an elite kicker.

Dak Prescott and Tom Brady put on a show, throwing for a combined 782 yards and seven touchdowns. pic.twitter.com/VoPk4DnTNp

Brady With too Much Time

Unfortunately for Dallas, Brady had 1:24 left on the clock. The Dallas defense made a valiant effort but eventually surrendered the game-winning field goal. Dallas had opportunities to get off the field but a big pass to Godwin, and a missed offensive pass interference call, positioned Tampa Bay on the Dallas 18 for a chip-shot field goal to win the opener.

Dallas Proved They are For Real

Aside from special team miscues, this was a tremendous game. Prescott proved he should be an MVP candidate in his return from injury, lighting up one of the best defenses in the NFL. CeeDee Lamb showed why he is a breakout candidate for this season with seven catches for 104 yards and a touchdown. More than his stat line, Lamb was an outlet for Prescott when under pressure, or when Dallas needed a big play, all night. Amari Cooper was great in this game registering 13 catches for 139 yards and two touchdowns. Cooper is poised to finish among wide receiver royalty this season.

Tampa Bay is Still the Team to Beat

Brady continues to prove he is still an elite passer, despite starting the season at 44 years old. The entire Tampa Bay offense appears to be in mid-season form as both Antonio Brown and Godwin eclipse the century mark. Gronkowski chipped in 90 yards with two touchdowns, and some of the biggest plays of the night. “Gronk,” made big play after big play when Brady was under pressure, perhaps the most intelligent player tonight.

This was a contest between two great teams looking to win in the postseason. Aside from special team miscues, Dallas showed they are the team to beat in the NFC East. Perhaps the Cowboys will have a chance for revenge in the playoffs against this now NFC South rival.