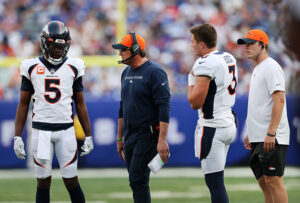 The Denver Broncos are taking risks, resulting in more hits than misses. It showed in the first game of the season, and that was a welcome change. It is fair that say that the majority of fans and analysts didn’t expect anything major from the Broncos. Playing against the New York Giants, a team struggling to make it out of a rut, Denver’s Week 1 win wasn’t a shock. It’s still too early to make any bold statements about a playoff run, but this first-week victory was much needed and appreciated.

Denver Broncos Risks Paying off So Far with Week 1 Win

Coming out of Week 1 as winners, it was quite apparent who were the stars and in which areas the Broncos excelled.

The Depth in the Offense Is Real

Right throughout the pre-season, the Broncos offense was more confident than they had been in recent memory. They knew there was no room for complacency. The franchise invested wisely through free agency and the draft, and it was just clear that they had more depth at each offensive position.

Back in June, Pro Football Focus named Denver’s receivers and tight ends combined to be one of the best corps in the league. Quarterback Teddy Bridgewater had no trouble finding Courtland Sutton, Jerry Jeudy and Tim Patrick to secure a lead in the first half. Bridgewater also enjoyed the benefits of having a top tight end unit around him in the form of Noah Fant, Albert Okwuegbunam and Eric Saubert. The tight ends combined for 10 catches, 85 yards, and a touchdown.

Von Miller Still Has It

If you didn’t know Von Miller missed 2020 with an ankle injury, you wouldn’t know it after this game either. He pushed back Kadarius Toney for a six-yard loss on the Giants first drive. He recorded his first sack of the season on third down, forcing a three-and-out. Next came a sack in the fourth quarter.

Denver’s defense is desperate to regain the reputation they had back in the 2015-16 season – their Super Bowl season. There seems to be a greater urgency in 2021, and to Miller’s credit, they had a fantastic start to the season. He is on pace to get 34 sacks, which of course will slow down, but it’s a great start nonetheless. The two sacks from Week 1 confirm his absence from the field didn’t do anything to hinder his performance.

Forcing takeaways at the most critical times was something that the Broncos habitually failed to do for the last two seasons. Josey Jewell and Alexander Johnson are on track to put an end to that weakness. During the second half as the Giants found their offensive rhythm, they forced a fumble on quarterback Daniel Jones. Malik Reed jumped quickly on the fumble while the secondary showed promising signs.

There was perhaps a sliver of doubt over Melvin Gordon’s efficacy. He allayed the doubts with a frenzied 70-yard touchdown late in the fourth quarter. Gordon tallied up 11 carries for 101 yards and three catches for 17 yards.  He and fellow veteran Javonte Williams as a tailback could potentially be a strong 1-2 punch.

The Broncos were near the bottom of the NFL in third down efficiency in 2020. Vic Fangio had avoided taking chances on fourth down. With the offense stepping up in big moments, his faith in the unit grew. Against the Giants, all three attempts to convert on fourth down were successful, pushing their lead ever higher. It will be totally unexpected by opponents if they keep this aggression up the rest of the season.

It is just the beginning of the season, and no one is making early assumptions. This was a significant win in terms of the way the team’s individual abilities gelled and took risks with great results.

The post Taking Risks Is Proving Successful for the Denver Broncos appeared first on Last Word on Pro Football.