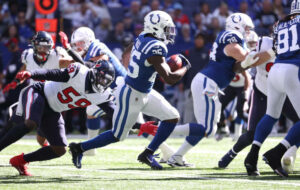 The Baltimore Ravens are running out of time to upgrade the running back position. The NFL trade deadline is 4:00 eastern, which means that teams only have a few more hours to agree to any transactions. The Ravens have gotten by with their current stable of running backs, but should they upgrade the position with a trade?

Baltimore Ravens Could Trade For A Running Back

It goes without saying that the Ravens have had some issues at the running back position. Entering the offseason, the team appeared to be in good shape with the 1-2 punch of J.K. Dobbins and Gus Edwards. However, both players suffered season-ending injuries in the preseason, as did fourth-string running back Justice Hill.

Because of this absurd run of bad luck, the Ravens had to turn to Ty’Son Williams while adding free agents Latavius Murray, Devonta Freeman, and Le’Veon Bell. Freeman and Bell both have yet to eclipse 20 carries, so Murray and Williams are the only two that have played a meaningful amount of snaps.

Sharing a backfield with Lamar Jackson is one of the easiest ways to be an effective running back. Jackson is simply unparalleled as a runner, and defenses will focus on stopping him more than the actual running back. However, despite this, the rushing attack simply hasn’t been as good as years past. Williams has actually been pretty effective when given a chance, but Murray is averaging a measly 3.6 yards per attempt on 59 carries.

For what it’s worth, Freeman has looked surprisingly solid in his limited carries. The longtime NFL veteran is currently averaging 5.5 yards per carry and has a burst that we haven’t seen from him in years. This could easily go away as he takes more hits, but it could earn him more carries in the short term. Bell, meanwhile, looks like he doesn’t belong in the NFL anymore.

SO nuts DeVonta Freeman’s first carry as a Raven was nearly a 40 yard TD.

GT bash. Chiefs both crash on Jackson. No discipline. pic.twitter.com/gCefUg1GKd

The Ravens could probably get by with this makeshift stable of running backs, but they should be open to adding a piece if the price is right. Looking around the league, the best fit appears to be Marlon Mack of the Indianapolis Colts. The former fourth-round pick tore his Achilles early in 2020 and has since lost the starting job to Jonathan Taylor. Now a backup, Mack has requested a trade, and the Colts are reportedly listening to offers.

Achilles injuries are notoriously difficult for running backs, but Mack appears to be back in football shape. While his efficiency numbers aren’t that great, he should receive a boost in Baltimore’s offense. Additionally, you can’t really blame him for losing the starting job, as Taylor is one of the best running backs in football. If the Colts can acquire Mack for a seventh-round pick, they should definitely pull the trigger.

Alternatively, the Ravens could go after Phillip Lindsay. Houston is clearly not competing this year, and they just traded away Mark Ingram for basically nothing. Lindsay has not played well this year, but he has a decent track record of solid play with the Denver Broncos. A change of scenery could be beneficial, and he probably wouldn’t cost more than a sixth- or seventh-round pick.

If the Ravens add a running back, it will probably be someone cheap like Lindsay or Mack. However, they could surprise the world and go after David Montgomery of the Chicago Bears. The running back is currently injured, but assuming his medicals check out, he’s easily the best of the aforementioned running backs. Khalil Herbert has done a phenomenal job in Montgomery’s absence and could be the starter moving forward. The Ravens would probably have to give up a Day 2 pick, which is probably too rich for Baltimore’s blood.

Ultimately, if the Ravens do add another running back, it should probably just be a cheap depth guy like Mack or Lindsay. They can get by with what they currently have, so really add they need is another set of legs as injury insurance.

The post Should the Baltimore Ravens Trade For A Running Back? appeared first on Last Word on Pro Football.