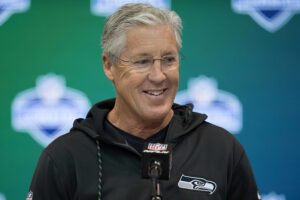 The Seahawks drafted a speedster in the second round (56th overall) in D’Wayne Eskridge. The team was in desperate need of a third receiver with David Moore going to the Carolina Panthers and Phillip Dorsett going to the Jacksonville Jaguars. Eskridge averaged 23.3 yards per reception on just 33 receptions last season, so the big play threat is clearly there. This also helps address Seattle’s need for a laterally quick wide receiver. The Seahawks lacked that last season and were one of the worst teams after the catch.

Eskridge will not only help the passing game, but also special teams as well. He averaged 27.5 yards per kick return in 2020 and returned one for a touchdown. This can let cornerback D.J. Reed stick primarily to defense instead of risking injury on special teams. Eskridge did have a bad injury in 2019 when he broke his collarbone and missed most of the season so that is something to monitor. Overall, this was good pick for the Seahawks, and it fills a void they were desperately looking to address.

It seems like the Seahawks are heading in a different direction in terms of the kinds of cornerbacks they are getting. Fans are used to seeing them get the tall and long cornerbacks but recently they have gone to more of the shorter and more physical ones like with D.J. Reed last season. Tre Brown, who the Seahawks drafted in the fourth round (137th overall), might be the most physical cornerback in this draft class despite being only 5’10” and 185 pounds. He had 33 pass deflections in his career at Oklahoma and three of his four interceptions came in 2020. His speed is a reason why he gets so many deflections. He uses that speed to close on receivers in a flash. The one question mark with him is the amount of pass interference penalties he commits. His speed can sometimes get him to receivers just a tad bit early He needs to work on reducing the number of times he is flagged for pass interference if he wants a shot to start year one.

Like Eskridge, Brown can also help the Seahawks on special teams as well. He returned kicks quite a bit college so that gives the Seahawks multiple options for a kick returner. Brown should fit right in with the Seahawks culture but he will need to fix a few things in coverage. Sitting behind the veteran cornerbacks for part of the season and playing sparingly should help his development. He has the potential to become a starter halfway through the season. Overall, this was a pretty solid pick and addressed a need.

This was probably the steal of the draft for the Seahawks. They traded up with the Chicago Bears in the sixth round to take the massive offensive tackle. Many draft analysts had Stone Forsythe as a day two or very early day three pick but he plummeted to the sixth round. The 6’8″ tackle gave up just two sacks in 513 pass-blocking snaps last season, according to Pro Football Focus. Forsythe seems like he’s going to be a project over the next few seasons so he can learn behind Pro Bowl left tackle Duane Brown and eventually take over as their starting left tackle. There is a chance he could play at right tackle this season if he shines in camp and Brandon Shell struggles or gets injured.

While he is very good in pass protection, his run blocking is an issue. He sometimes is slow getting to the block and can be beaten easily at times. That is something he is going to have to work on a lot. If he can be at least average in run blocking and continue to excel in his pass protection, the ceiling for him could be a Pro Bowl tackle or even an occasional All-Pro tackle. This grade is solely based on the upside he can provide down the road.