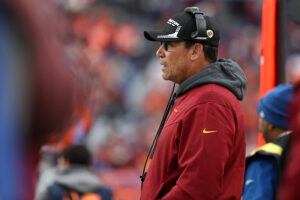 In Week 11, Ron Rivera will be facing the Carolina Panthers for the second time as the Washington Football Team head coach. Round Two of Rivera versus the Panthers will take place in Charlotte. Rivera spent nine seasons as the head coach of the Panthers. During Rivera’s tenure with the Panthers, the team went 76-63-1.

As fate would have it in 2020, Rivera was hired by Washington; the team Rivera lost to in his last game with the Panthers. Let’s look at Rivera’s first matchup against the Panthers as the Washington head coach and the tale of the tape for the matchup in 2021.

Ron Rivera Versus the Carolina Panthers: Round Two

The first matchup between the two teams occurred in Week 16 of the 2020 season. The Panthers jumped out to a 20-3 halftime lead behind quarterback Teddy Bridgewater and four Washington first-half turnovers. The second Washington turnover resulted in the Panthers first points of the game. The Panthers recovered a muffed punt return by Steven Sims at the Washington eight-yard line and took it in for a touchdown.

The Washington defense held the Panthers scoreless in the second half. Taylor Heinicke replaced starting quarterback Dwayne Haskins in the fourth quarter and led Washington on a scoring drive to bring Washington within seven points with 1:50 remaining in the game. A failed onside kick attempt following the touchdown led to the Panthers sealing the 20-13 victory. While Washington ended the game with more first downs and total yards, the Panthers won the turnover and time of possession battle in Round One.

The Tale of the Tape for Round Two

Washington has a 3-6 record entering Week 11. The Panthers enter Week 11 with a record of 5-5. Both teams are coming off of big wins in Week 10. Washington defeated the defending Super Bowl Champion Tampa Bay Buccaneers 29-19. The Panthers defeated the Arizona Cardinals 34-10.

On the offensive side of the ball, the two teams are comparable in terms of league ranking. The x-factor for both offenses will be at the quarterback position. Washington will look for Heinicke to build on his performance against the Buccaneers with a similar outing against the Panthers. The Panthers will look for Cam Newton to spark an offense that lost quarterback Sam Darnold to injury.

Ron Rivera was the Panthers coach when the team drafted Newton first overall in the 2011 NFL draft. Rivera and Newton both parted ways with the Panthers in 2019. Some thought Rivera and Newton would reunite in Washington, but that never came to fruition. Newton will look to prove that he is not done as an NFL starting quarterback and show his former coach why he should have brought him to Washington. Both teams will be motivated to continue their winning ways, making for an exciting showdown in Charlotte.