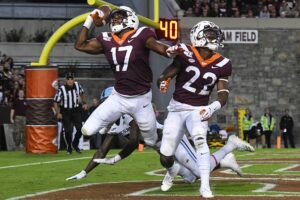 Players hearing their name called in the NFL Draft is only the beginning of an arduous journey to the pros. Just transitioning to the NFL may not be the only change necessary for some players to compete. It is common for coaches to move players around to fit their schemes. Rookie Divine Deablo, selected by the Las Vegas Raiders, will be one of the many players to switch positions in 2021. Playing safety at Virginia Tech, Deablo will be transitioning to linebacker for the Raiders in his first professional season.

Familiar with changing positions, Divine Deablo departed from Winston-Salem High School as a receiver and joined the Virginia Tech Hokies as a safety. His 6’3”, 226-pound frame yielded well to this change and allowed for success on the opposite side of the ball. In just a two-year span, Deablo compiled 101 tackles on just 1,556 snaps. Confident in his ability, Deablo seems poised to make another change at a more elite level.

How It Could Work

The Raiders brought in defensive coordinator Gus Bradley after a horrible 2020 season. Bradley, known for directing the “Legion of Boom” with the Seattle Seahawks, looks to re-create that style of defense in Las Vegas. Although the secondary dominated in that scheme, the linebacker role was just as important. Deablo showed his blazing speed at the Virginia Tech pro day with a 4.2 40-yard dash time. Bradley could use him at the middle level of the defense to produce sideline to sideline. His quickness could be exactly what Bradley wants in a roaming linebacker role. After taking three safeties in the draft, the secondary remains deep. The switch to linebacker could not only balance the field in terms of talent but could also balance the depth chart as well.

How It Could Fail

A lot of the talent on the Raiders’ defensive roster could be labeled as “hard-hitting.” This tag does not elude Deablo, whose pursuit is very similar to Karl Joseph. Packages with Joseph, Deablo and Johnathan Abram could see a trio pursuing ball carriers like missiles. However, big hit intentions could lead to missed tackles. In a division with matchup nightmares like Travis Kelce, Keenan Allen and Jerry Jeudy, Deablo may struggle to wrap up. Deablo lacks true coverage skills as well and gets caught behind speedy receivers if his eyes stay in the backfield. Pursuit is a positive trait, but playing close to the line of scrimmage could find Deablo not playing the width of the field. Discipline will be key for the young defender heading into 2021.

Jon Gruden and Mike Mayock made strides in improving the Raiders defense in 2021. Adding premier talent via the draft, Gruden and his staff have put their coaching abilities to the test. With a young secondary and a developing pass rush, pressure is on Gruden, Bradley and the linebackers to cement the defense’s identity. With a successful move, Deablo could improve other areas of the defense. Conversely, if he struggles, the Raiders could find themselves missing the postseason again. Gruden having Divine Deablo switch positions should bring hope to Raider fans. If Gruden and Bradley want to create a contender on defense in 2021, they’ll have to continue to move their chess pieces carefully around the board.