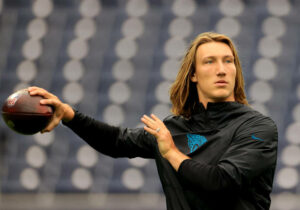 The 2021 NFL Draft featured several high-caliber offensive players that will make an immediate impact on their team. Not all of the most impactful rookies this season have been drafted in the first round. These are players given a special role on their team, but they also will face the most pressure this season. Here are the predicted 2021 NFL All-Rookie Team on offense.

There were five quarterbacks taken in the first round of the 2021 NFL Draft. Jacksonville is giving Lawrence full responsibilities and control of the offense. While Lawrence will experience some growing pains in the NFL, he has the talent to likely succeed in his first year. He is the top potential candidate to be the 2021 NFL Offensive Rookie of the Year if he is healthy. Lawrence will have a big responsibility of trying to turn Jacksonville into a consistent scoring offense. Last season, the Jaguars ranked 30th in the league in points per game (19.1). If Lawrence can make that offense rise in efficiency, he will added to the 2021 NFL All-Rookie Team rewarded for it.

Pittsburgh drafted their first running back in the first round for the first time since they drafted Rashard Mendenhall in 2008. The Steelers were last in the league last season in rushing yards per game (84.4). Harris being the starting back of the Steelers will bring some much-needed explosiveness in the backfield and adds another reliable pass-catcher for quarterback Ben Roethlisberger. The Broncos are high on Melvin Gordon, but they love the potential of their second-strong back in Williams. Williams will bring some excellent options for plays and depth. Williams will need to be ready to start as Gordon hasn’t played a full-season since 2017.

#Steelers rookie Najee Harris runs out to boos – and motions for more noise. (Side note: I love it.) #PITvsBUF pic.twitter.com/lKGX1EAFpq

There was a serious debate on if the Bengals needed to address their offensive line or find a new weapon for quarterback Joe Burrow. Not only did the Bengals draft a receiver, but they drafted one that Burrow was already comfortable with. Chase has been training with Burrow like they were back in the LSU days. The Bengals ranked 27th in the league last season in passing yards per game (215.5). Burrow and Chade could be one of the best duos in the NFL this season. They are not the only former college teammates reuniting this season. Waddle and Dolphins quarterback Tua Tagovailoa will become teammates once again as they will try to create an explosive passing offense for the Dolphins. Waddle was the sixth player picked overall and the second receiver selected in the 2021 Draft.

The Dolphins will be relying on the speed, explosiveness, excellent route-running of Waddle to create some big plays. If Waddle is healthy, he will be a tough player for opposing defenses to suppress. Pitts was an easy choice for the Falcons to add to their team. His size, tremendous athleticism, reliability as a receiver, and can play anywhere in the spread formation. Pitts is a matchup nightmare as he might be too big for some defensive backs and too fast for linebackers to cover. He will be the biggest threat for Offensive Rookie of the Year to Lawrence this season.

Of all the offensive linemen that were picked in the 2021 Draft, the best pick was likely Slater to the Chargers. Slater immediately became the left tackle/blindside blocker for quarterback Justin Herbert. The Chargers gave up 34 sacks this past season and did not run the game well either. The addition of Slater to the Chargers’ offensive line will boost the efficiency of the passing and running game of the Chargers. The Lions got a steal with the seventh overall pick with Sewell. Last season, the Lions gave up 42 sacks to the quarterback, which was the tenth highest in the league. Sewell was rated as the top pass protector of the 2021 NFL Draft class. Sewell projects to be one of the most consistent rookie blockers this season.

The Jets made some noise in the first round of the Draft by trading up and selecting a guard with that pick. Vera-Tucker isn’t an ordinary guard, however, as he plays with consistency and aggressiveness in the run and passing game. He will help bring more consistency for both phases of the offense than Zach Wilson will. Some other rookie guards will be starting, but there isn’t one to be called on more than Cleveland. He will have to be one of the lead run blockers for a Ravens’ power-run offense, led by rookie quarterback Lamar Jackson. Humphrey comes in immediately as the starting center for the Chiefs’ offensive line, who was exposed significantly in Super Bowl LV. He will be efficient for the fast-paced, explosive offense as a run blocker and efficient pass protector.