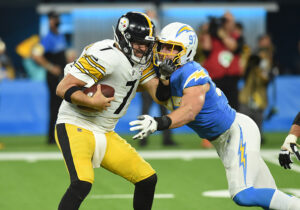 The Pittsburgh Steelers took a five-game non-losing streak (four wins, one tie) into Week 11. On Sunday Night Football, the Steelers squared off against the Los Angeles Chargers in Los Angeles. The Chargers got off to a hot start, and at one point led by seventeen points. But the Steelers resilient offense fought back and Pittsburgh even led by three points with a few minutes left. The shootout out west ended in a narrow 41-37 win for the Chargers, despite a strong performance from the Steelers offense in Week 11.

Chargers Jump Out to Early Lead

The Steelers opened the game up with a field goal on their first drive. But the Chargers answered with a productive drive, which ended in an Austin Ekeler touchdown. The Steelers next drive looked promising, but a turnover-on-downs from the opposing two-yard line stopped their drive. The Chargers rolled right back down the field for a 98-yard touchdown drive; this time, it was a receiving score for Austin Ekeler.

The Steelers, now down eleven points (14-3), went down the field in seven plays and added a touchdown of their own. Ben Roethlisberger threw his first of three touchdowns on the night to receiver Diontae Johnson from ten yards out. This was Johnson’s fourth touchdown of the year. Los Angeles used a late, one-minute drive to add another three points via a Dustin Hopkins field goal. The Chargers led 17-10 at halftime.

Steelers Fight Back in Fourth Quarter

The Chargers opened up the third quarter with another Austin Ekeler receiving touchdown. They also tacked on a 41-yard field goal on their next drive to make the score 27-10. Early on in the fourth quarter, the Steelers added their second field goal to make the score 27-13. On the next Los Angeles drive, Ty Long’s punt was blocked by Pittsburgh’s Miles Killebrew. The ball rolled out of bounds at the three-yard line. It did take the Steelers four plays to get three yards, but an eventual one-yard rushing touchdown by rookie back Najee Harris brought the score to within seven.

The Chargers would not back down, however; they answered with a seven-play, 75-yard drive capped off by another Austin Ekeler rushing touchdown. This seemed to have put the game out of reach since Los Angeles led 34-20 with under nine minutes left.

But the Steelers went right back down the field and tight end Eric Ebron, who was later injured, caught a five-yard receiving touchdown. The ensuing Chargers drive ended in an interception when defensive end Cameron Heyward tipped a Justin Herbert pass, and Cameron Sutton snagged the ball for a pick. On the third play of the drive, Roethlisberger completed a five-yard pass to tight end Pat Freiermuth for the game-tying touchdown.

Now tied with Pittsburgh, the Chargers made a bold call on fourth-and-one from their 34-yard line. They tried to run it up the middle with Austin Ekeler, who had success all game, but he was stopped by Joe Schobert. The Steelers were unable to do much with their good field position; a three-and-out led to a 45-yard field goal from Chris Boswell, who has had a fantastic season. The Steelers now led 37-34 with just three-and-a-half minutes

Los Angeles got the ball back and did not disappoint. On the third play of the drive, the Steelers defense ran a blitz-trap play. Essentially, they were trying to pressure and force Herbert into throwing the game-sealing pick. But Herbert had a good read on the coverage scheme and found Mike Williams along the sideline for a 53-yard touchdown.

Pittsburgh had one final chance with just over two minutes left, but they couldn’t do anything with the time. Two sacks on first and second down sent the Steelers all the way back for a third and 29. Following two incomplete passes, the Chargers took over and took a knee. The Steelers fought back from a large deficit, but in the end, lost their Week 11 game. They are now 5-4-1 on the year. Meanwhile, the Chargers moved to 6-4 and into the AFC playoff picture as the six-seed.

Herbert and Ekeler Get Going for L.A.

Austin Ekeler and Justin Herbert shredded the Pittsburgh defense, both on the ground and through the air. Ekeler finished with 115 total yards (50 rushing, 65 receiving) and four touchdowns (two rushing/two receiving). He had impressive agility throughout the whole game and broke a lot of tackles. He is a very quick and elusive back who put his talents on display in his four-touchdown effort.

Justin Herbert, the Chargers quarterback, did everything a coach could ask for. Herbert threw for 382 yards against a beat-up Pittsburgh secondary and added 90 rushing yards too. His runs were very impactful as nearly every single one of his runs ended in a first down. Herbert’s ability to slow the game, read and dissect the defense helped Los Angeles win the Week 11 shootout.

Roethlisberger’s Best Game of the Season

Without a doubt, veteran quarterback Ben Roethlisberger had his best game of the season Sunday night. Big Ben threw for 273 yards (his third-most in a game this year) and three touchdowns (his season-high). He completed 63.6% of his passes (28 of 44) and had his third-highest passer rating (103.7) of the season.

In addition to his impressive stats, Roethlisberger also showed that he is the leader of the offense. He brought Pittsburgh all the way back from a deep hole they were put in by the defense. Even though it took Roethlisberger until Week 11 to break out, he still has played rather well for his age.

Rookie running back Najee Harris had just 39 yards and a touchdown on twelve carries in Sunday’s loss. While Harris did get injured, he wouldn’t have been very useful anyway as the Steelers were down big, and they were forced to pass for most of the game. Harris likely wouldn’t have had much of an impact had he played the whole game. Overall, the Steelers finished with 55 yards on eighteen carries which is by far one of their worst rushing performances all year. But, the run game was not needed in the comeback.

Steelers Receivers Help Out Their Quarterback

Pittsburgh’s top two receivers, Diontae Johnson and Chase Claypool, led them in receiving Sunday night. Johnson, the third-year man out of Toledo, tallied 101 yards and a touchdown on seven catches. Claypool, a second-year deep threat out of Notre Dame, had five catches for 93 yards. Both tight ends (Pat Freiermuth and Eric Ebron) each caught a touchdown, but neither had much more of an impact.

These pass-catchers have come a long way from leading the NFL in drops last year. The combination of Johnson, Claypool, and James Washington has proven to be effective in the past few games. The Steelers will likely lean heavier on the passing game in coming games after seeing Sunday’s performance by Roethlisberger.

The usually-reliable Steelers defense allowed 541 yards of total offense to the Chargers. Pittsburgh was missing three crucial players on defense: linebacker T.J. Watt, cornerback Joe Haden, and safety Minkah Fitzpatrick. In their absence, the secondary and pass defense was torn up by Justin Herbert. The linebackers group, missing T.J. Watt, struggled a lot versus the Chargers offense. Once the Steelers get their stars back next week, their defense should get back on track. However, if they can’t get things done with their best players, the defense will suffer miserably at the hands of other NFL offenses.