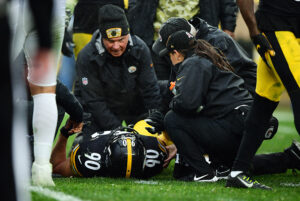 Heading into their crucial Week 11 game with the Los Angeles Chargers, the Pittsburgh Steelers got some bad news with their injury report. Following their disappointing tie with the Detroit Lions in Week 10, Pittsburgh still holds onto the six seed in the AFC playoff race. The Chargers currently hold the seven seed, so this is a crucial matchup for the Steelers. According to their injury report, the Steelers will be without numerous key players and seem to be fighting an uphill battle in their search for a Week 11 win.

The Steelers will be without T.J. Watt in the game, one of the best overall players in the NFL. He will miss the game due to a hip/knee injury suffered against the Lions, which looked like it could have been a season-ender. Rookie defensive end Isaiahh Loudermilk is out with a groin injury. Pittsburgh’s defensive line has been destroyed this year. Stephon Tuitt hasn’t played, Tyson Alualu is out for the season, and his backup Carlos Davis has also missed most of the season to an injury. Add Loudermilk to the list. Cameron Heyward and Alex Highsmith will have to strap the defensive line to their backs on Sunday Night Football. Veteran cornerback Joe Haden will also miss the game, a blow to a secondary in which he has been one of the better players this year.

On the offensive side of the ball, the Steelers injury report wasn’t so bad. The only player on offense ruled out for the game was left guard Kevin Dotson. One of the Steelers better linemen this year, Dotson suffered an ankle injury against the Lions and didn’t return. He will now miss Week 11. It would have been nice for the Steelers to have Dotson against the Chargers, who have one of the worst run defenses in the NFL. They can be run on and having Dotson certainly would have helped.

On top of the Steelers injury report, they have some COVID issues to deal with. Most importantly, Ben Roethlisberger’s status is up in the air. He has one more chance to test negative on two straight days to play. Even if he does play, it will be without practicing all week. As Mason Rudolph showed against the Lions, even though Roethlisberger is a shell of his former self, he gives the Steelers the best chance to win football games. With all these other injuries, it still feels like the Steelers will have a chance if Roethlisberger is playing quarterback. If Rudolph is back there, though, forget about it.

Minkah Fitzpatrick is another player with COVID issues, though there’s no uncertainty in his case. He will miss the game due to the NFL’s COVID protocols. Fitzpatrick has come under scrutiny for his play this year, some warranted and some not. The splash plays haven’t been there like in years past, but Fitzpatrick has still been a crucial playmaker on the back end of the Steelers defense. No one else in their secondary room has a skillset quite like Fitzpatrick’s. It will take a whole group effort to replace what he brings to the team. Without Fitzpatrick, Watt, and Haden, the Steelers defense is likely in trouble on Sunday night.