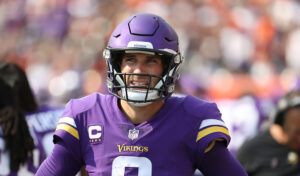 The Minnesota Vikings kicked off the first full day of the 2021 season on Sunday, hitting the road to face off against the Cincinnati Bengals at Paul Brown Stadium in Cincinnati. After a rough start to a game with plenty of Minnesota Viking turnovers, they dropped the opening game of the season to the Bengals 27-24 in overtime despite a second-half and fourth-quarter comeback capped by a 53-yard field goal to tie the game and send it into overtime.

The loss is a disappointing way for Minnesota to begin the season. There are diminishing hopes of returning to the postseason. The biggest forms of disappointment for the Vikings were a rough start, penalties and late turnover that weighed heavy on the week 1 loss.

Minnesota Vikings Turnovers Too Much to Overcome in Week 1 Loss

Right out the gate in the game it felt like the Vikings started from behind and just couldn’t get things going on either side of the ball. That set the tone for the rest of the game.

A Flood of Penalties

In the first half, Minnesota got off to a slow start led by a heavy load of penalties. The Vikings tallied a total of 10 penalties for 91 yards, including four in the opening drive alone. That 10-penalty first-half marked the first time since 2005 that a Minnesota team had nine or more penalties in the first two quarters of a game.

In the end, the Vikings ended up finishing with a total of 17 penalties, with 12 of those penalties being accepted to compile for a total of 116 penalty yards in the game.

Even with those penalties, Minnesota managed to make it a game and force overtime, out-scoring Cincinnati 17-10 in the second half. Unlike the first two quarters of the contest, the Vikings offense started to pick up some steam and get points on the board, paired with the defense beginning to lock down the Bengals and put pressure on Cincinnati’s offense for the final two frames.

But in extra time during overtime, more disappointment followed when the Vikings appeared to have the game in hand with a chance to pull out a comeback win.

With just a few minutes left in overtime, Minnesota got the ball with a few minutes remaining and a chance to steal the game on the road following a rough showing up until that point.

The Vikings marched down the field and got the ball into Cincinnati territory. Yet, running back Dalvin Cook provided another crucial blow to the team when he fumbled the ball while being tackled, which resulted in the Bengals taking over and ultimately winning the game with a field goal in the final seconds to pull out a three-point victory at home.

With the loss, the Vikings fell to 0-1 on the season and will shift their focus to another road game next weekend when they hit the road to take on the Arizona Cardinals in Arizona. Luckily for Minnesota, the rest of the NFC North struggled on opening weekend, leaving the division wide open going into Week 2.

The fact that Minnesota lost in Week 1 was not the primary source of disappointment; it was how the Vikings lost. Penalties throughout the game, capped by a crucial late-game turnover, absolutely haunted Minnesota to begin the new year.