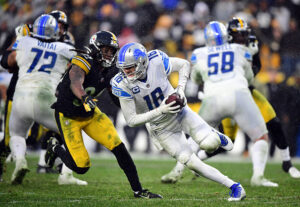 The Pittsburgh Steelers were unable to pull off a win despite multiple chances in overtime on Sunday. Neither they nor, the Detroit Lions, could overcome the conditions of Sunday’s game in Pittsburgh. Both teams faced critical injuries and bad weather conditions, and couldn’t take advantage of the other teams’ struggles. The Lions achieved their first game without a loss all season. But they still remain winless after Week 10 following a 16-16 tie with the Steelers.

The Steelers knew before the game that it would be difficult to pull off a dominant win over the winless Lions. Veteran quarterback Ben Roethlisberger was placed on the COVID-19 list Saturday night. This meant that backup QB Mason Rudolph, a 2018 draft pick from Oklahoma State, would be slated to start the Week 10 game. Rudolph had prior experience in starting games before Sunday; he served as the starter for several games in 2019 when Ben Roethlisberger went down with a season-ending injury. It was his first start this season, but unfortunately, he couldn’t pull off a win for the Steelers.

Rudolph’s best play of the day came on the first drive. The Steelers opened up the game with a ten-play, 83-yard touchdown drive to go up 7-0 early. Pittsburgh put together a nice opening drive while incorporating James Washington. Washington, also from Oklahoma State, had two catches for fifteen yards and the opening drive touchdown from nine yards out. The next six possessions (three for DET, three for PIT) all ended in punts, except for one Steelers drive. Julian Okwara picked off one of Rudolph’s passes, but the Lions couldn’t do anything with the short field.

On one of the Steelers punts, Detroit’s returner Khalif Raymond ran a punt back for 48 yards and set the Lions up at the opposing 39. It only took three plays before the Lions rookie running back Jermar Jefferson broke off for a 28-yard touchdown run, tying the game at seven. Each team would kick a chip shot, twenty-yard field goal before halftime to make the score 10-10.

The Lions opened up the second half with four rushing plays that were each for 12+ yards. The final play of the drive was a 42-yard rush by Godwin Igwebuike for a Detroit touchdown. This put the Lions up 16-10. A missed extra point by recently-elevated kicker Ryan Santoso kept the game 16-10; that extra point would prove costly later in the game. The Steelers were able to tack on a 23-yard field goal for three more points, and they pulled within three with 8:30 left in the third quarter.

The Lions would punt on their next two drives, but after a Steeler punt on the drive after the field goal, Pittsburgh was able to get three more points. A short punt by the Lions set up a short, 51-yard field goal drive for the Steelers. This made the score 16-16; little did both teams know that this would be the final score of the game. The next six possessions (three for each team) gained no result for either team, and the game went into OT tied at 16.

Many have described this overtime period as a comedy full of blunders and basic errors. It was just that. The Lions first drive was foiled by a nine-yard, third-down sack by Cameron Heyward. The Lions punted to the Steelers, who started at their own 17 yard-line. On the second play of the drive, Rudolph found Pittsburgh receiver Diontae Johnson open downfield for a gain of 39 yards. But Mark Gilbert, a Detroit cornerback, punched the ball out of Johnson’s hands and forced a fumble that his teammate would recover. Detroit only traveled twenty-five yards before they sent out their kicker Santoso for a 48-yard attempt. The kick fell several yards short and gave the Steelers the ball right back, this time at their own 38.

But this drive was doomed from the second play onward. Rookie center Kendrick Green snapped the ball several feet over Rudolph’s head, and the ball was recovered by Najee Harris after a loss of thirteen yards. This wasn’t the first poor snap from Green on the day; the center had three snaps that previously were high or off-target. Green had a rough day at center, but hopefully, his struggles were due to slick conditions and not mechanical errors. The Steelers did nothing the following play and punted the ball back to Detroit. But the Lions had no answer either; after a first-down sack by safety Terrell Edmunds, the Lions had to punt on a 4th-and-23 in their own territory.

A Promising Drive, Until…

The next Steelers drive looked promising, as they were able to string together several quick plays to move the ball down the field. It was unlikely that they would get all the way down to score a touchdown, so Pittsburgh was only aiming to get inside field goal range for their kicker Boswell. On a first down, from the Detroit 39, rookie tight end Pat Freiermuth caught a one-yard pass in the flat from Rudolph but lost the ball on his way towards getting out of bounds. Safety Will Harris, of Detroit, knocked the ball out of Freiermuth’s hands and took the ball right back from the Steelers after a promising and potentially game-winning drive.

The Lions only had time for one play, but couldn’t get it into the endzone after multiple lateral attempts. Linebacker Alex Highsmith forced the third ball carrier out of bounds 40 yards out from the endzone and sealed the tie. Both teams had a hard time moving the ball in overtime, but when they did have a chance, they blew their chances quite easily.

Rudolph certainly had high expectations going into this Week 10 game; unfortunately, he didn’t fully live up to them. He finished with 214 passing yards on a 30/50 effort and added a touchdown and an interception to his stat line. Rudolph missed on several key throws, including one that would have been a touchdown to Diontae Johnson. Rudolph did add 36 yards on the ground, though, which is something uncommon for Pittsburgh quarterbacks. But despite his best efforts, it is quite clear that Rudolph is not the answer after this season.

The running game was really opened up thanks to some good blocks by the offensive line, and some great downward running by Najee Harris. He finished with 105 yards on 26 carries, and he also added four catches for 28 yards. Harris is a great power back, as he initiates contact and fights through it well. He really has been one of the few high points of the Steelers limited offense this year; his role over the next few games could increase should Ben Roethlisberger be out for a prolonged period of time.

The receivers and tight ends didn’t have bad games until the end. Normally the return man, wide receiver Ray-Ray McCloud hauled in nine catches for 63 yards. This was a career day for McCloud, as before he rarely found ways to be incorporated into Pittsburgh’s scheme. Johnson had eight catches for 73 yards and had a pretty impressive game before his fumble lost. It seemed early that James Washington, a fellow friend and former teammate of Mason Rudolph, would be a vital player in the offense. He finished with just two catches, one of which was the touchdown. He had six targets and drew a few pass interference penalties, but his name pretty much vanished as the game went on.

The offensive line played well on Sunday; in fact, it was probably one of their best games this season, if not their best game. They played strong in Week 10 and did not yield a single sack. The line was able to open up plenty of holes for the rushing game; the Steelers finished with 145 yards on the ground. They even had to deal with two starters getting hurt, but the line stayed bound together despite the challenges.

There isn’t much to say about the run defense. The Lions had 229 rushing yards, including letting second-year back D’Andre Swift run for 130 yards. The defense also let up several plays of 20+ yards. The most embarrassing moment was when Detroit’s back Igwebuike ran for a 42-yard tackle, breaking several tackles on his way into the end zone. The Steelers did stop nine plays behind the line, but the amount of success that Detroit had outweighed those great plays.

The pass rush impressed for one of the first times this season. The unit allowed Jared Goff just 114 yards through the air, most of which came later in the game. The Steelers had four pass breakups and made it hard for the Lions receivers to do much. T.J. Watt and Terrell Edmunds each had a sack, and Cameron Heyward also added two sacks to the total of four. Rookie corner Tre Norwood had two passes defended, and he continues to make his mark on this depleted Pittsburgh secondary.

Safety Minkah Fitzpatrick, who is known for his splash turnover plays, hasn’t had much productivity this year. However, many of his forced turnovers have been called back due to penalties. On Sunday, Fitzpatrick picked off Jared Goff in OT, which would have been his first of the season. However, a defensive holding penalty erased the play and took away his interception. Fitzpatrick has quietly been a great tackler and play stopper this year, but his unluckiness when it comes to turnovers has made his name come up less in broadcasts and reports.

Ben Roethlisberger: Roethlisberger is reportedly doing well, but the extent of his symptoms/whether he is showing symptoms is unknown. Given the pandemic rules set, and the fact that Roethlisberger is vaccinated, there is a pretty good chance he is back for Sunday Night Football next weekend. But the Steelers should be prepared to start either Rudolph or third-stringer Dwayne Haskins should Roethlisberger not be ready to return.

Minkah Fitzpatrick: It was announced on Monday that Fitzpatrick had tested positive for COVID-19 after Sunday’s Week 10 game, and it is very likely that he will be out for at least next Sunday night’s game against the Los Angeles Chargers. This is a big loss for the Steelers, especially when they have to face explosive wideouts like Keenan Allen and Mike Williams next week.

T. J. Watt: Watt’s hip and knee MRIs both came back negative, meaning he has no major damage. Watt was reportedly still in pain after the Week 10 game, but he is without a long-term injury, it’s possible for him to be back as early as next week. It is more than likely that he is watched closely this week, and his presence would be greatly missed if he is unable to come back before next Sunday.

Trai Turner, Kevin Dotson: Turner left Sunday’s game early with an ankle injury, but little is known about the severity of his injury. Turner never did return to the game, but no serious announcements have been made yet. Meanwhile, for guard Dotson, there isn’t much good news in his situation. Dotson is dealing with a high-ankle sprain and is likely out for a few weeks. A timetable has yet to be established. The team turned to J.C. Hassenauer and Joe Haeg after the injuries to fill in. It is likely these two will see a lot of playing time in the next few weeks.

Joe Haden: Veteran corner Haden also left Sunday’s game early with a hip and an ankle injury, but his MRIs revealed no major results. Haden is considered day-to-day and is likely to be ready for Sunday’s game at the Chargers. The Steelers are going to need him should he be healthy.