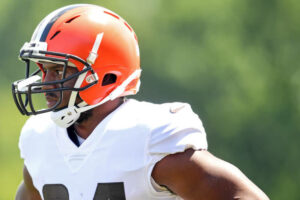 Nick Chubb has been one of the best running backs for fantasy football since entering the league. The former Georgia Bulldog has just completed his third straight season of averaging over five yards per carry. He also finished with the second-most rushing yards in the NFL back in 2019. Last season Chubb only played in 12 games, but if you look at what he would have done had he played the entire season, he would have finished third in rushing yards. Coming into this season, Chubb is ranked as a back-end first-round pick in fantasy football leagues. So where should you draft Nick Chubb?

Nick Chubb’s main strengths are running the football and running it into the endzone. In his first three seasons in the league, his worst year statistically was eight touchdowns and 996 rushing yards, which was his rookie season. Chubb’s season-long stats don’t even tell the full story of his enormous upside. In his rookie season, he didn’t even take over the starting running back spot until a few weeks into the season.

Last year in 2020, Chubb missed four games with an MCL injury, limiting his production to only 1,067 yards rushing. Operating behind one of the best offensive lines in the NFL on a team that should be winning many football games this year, Chubb is in a position to get lots of carries and make the most out of his touches.

The only thing holding Chubb back from being in the high-end RB1 range in fantasy is his lack of pass-catching. Last season Chubb only had 16 receptions for 150 yards and was targeted 18 times. This is because the Cleveland Browns have Kareem Hunt, a running back who can catch passes, to operate on third down.

This year the situation is the same, so Chubb won’t be catching more passes. When playing in a PPR league, this definitely hurts Chubb’s value when deciding between him and other running backs. The threat of Hunt also stealing rushing work is another concern. The Browns could decide to form a committee in order to ease the workload off of Chubb. The other worry with Chubb is the four games he missed last season. This is only a minor concern but is still something to monitor.

Kareem Hunt FLIES in for the TD! #Browns

Despite Chubb’s limitations as a pass-catcher, he is still a must-own running back. Chubb is a perfect first-round pick in that he has a safe floor and elite upside if Kareem Hunt happens to go down. If Kareem Hunt were to get injured, Chubb would instantly be a top-five running back each week.

Fantasy football is all about avoiding risk in the early rounds, and Chubb is about as solid of a first-round running back as you can get outside of the big five (Christian McCaffrey, Ezekiel Elliot, Derrick Henry, Dalvin Cook, and Alvin Kamara). Currently ranked as RB10 on ESPN, managers who can get Chubb at that spot should be content.