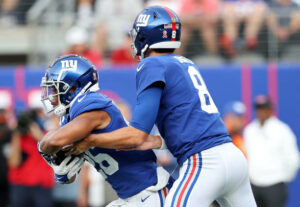 The New York Giants came into this season as having one of the worst offenses from 2020. In their 27-13 defeat at the hands of the Denver Broncos, fans, coaches and players alike saw what seemed to be a repeat of last year’s stagnant offensive gameplan. At points, it seemed as if the offense had gotten worse and did not improve despite the added weapons. The Giants travel to Washington on Thursday night, and they need to fix their offensive issues quickly in order to have a chance at their first divisional matchup of 2021.

Unfortunately, offensive coordinator Jason Garrett has not learned from his past mistakes. He is simply afraid to let this offense loose. All he does is run pass-plays with routes that barely get to the sticks. The most creative play he called all game was an end-around to Kadarius Toney in the first quarter, which ended in a six-yard loss.

Curl routes, comebacks, the Jason Garrett offense is simply boring. He does not know how to use his personnel correctly and is one part in holding this offense back. In order for the Giants offense to be successful, this must change.

Quarterback Daniel Jones fumbled away a chance to score in what was a somewhat close game at the time. Time and time again fans have sat and watched as their quarterback gave the ball away on numerous occasions.

Daniel Jones has 30 fumbles in 28 career games, the most by far in NFL history. The guy cannot hold onto the ball for whatever reason and it is continuing to hurt this team. Not to mention his decision-making, Jones had a few near-interceptions and was lucky not to throw one.

Jones does not go through his progressions at all and decides who he’s throwing to pre-snap. He stares down his receivers almost every single passing play. Jones got away with these mistakes as a rookie, this will certainly not be acceptable in year three.

The Offensive Line Still in Shambles

The problems lie at right tackle, both with Nate Solder and Matt Peart. Solder looks like a guy who should not be on an NFL roster. He was beaten badly by Von Miller on one play which resulted in a sack. Peart had one play where he stood still the entire time. There was also a play where Solder was turned around and ended up blocking his own teammate!

Besides those two, the pass blocking was not terrible, and Daniel Jones was kept clean on 74.4% of his dropbacks, the second-highest of his career according to PFF.

Run blocking was where the problem lied. There were no holes whatsoever in the run game. Luckily, Saquon Barkley came away healthy but was limited in carries all game.

The Giants offense was not good in their 2021 season debut. Their Week 1 showing has already diminished some hope fans had for the season. Fortunately for them, it was only Week 1. If they want to win back their fanbase and prove they can be a good offense, they will have a chance on a short week in Washington. If this offense can put up points and allow the defense to adequately rest, they could be 1-1 by this time next week.