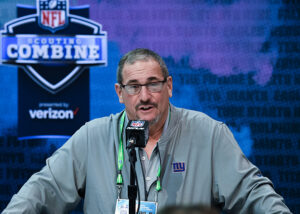 The 2021 NFL Draft is officially in the record books as each franchise added quality young talent to their rosters. Now, comes the dissection of each pick and grading of each team’s draft class. For the New York Giants, their draft grade should be incomplete for this year. Why? Because of the maneuverings made by Giants general manager Dave Gettleman in the Giants 2021 NFL Draft.

It took 54 draft picks made and eight years as an NFL executive before Gettleman traded down in the draft. And he did it twice this year. The first trade was necessitated by the Philadelphia Eagles moving in front of the G-Men with a trade of their own (with the Dallas Cowboys) to select DeVonta Smith. The Giants wanted to add another offensive playmaker, but their options were limited after the first 10 picks were made.

Fans should give Gettleman credit for reading how the draft was trending and getting on the phone to see who was interested in moving up to the 11th spot. The Bears wanted to draft their quarterback of the future and Justin Fields was still available and they had the right combination of enticing draft picks to get the deal done. It was too good of a trade proposal for the Giants to pass on. Still, it is amazing to think that the Giants gained three additional picks (first, third and fourth) for the 2022 draft and selected a wide receiver (Kadarius Toney) this year to add to their offensive mix.

It was a smart move to acquire the Bears first-round pick next season. The odds are high that they will struggle to win games and it could become a top-five pick. Granted, the Bears were a playoff team in 2020, but they were led by an outstanding defense that often bailed out their run-dominated offense in the majority of their wins. Now, that unit will be headed by a rookie quarterback, who is limited in his ability to read more sophisticated pass coverage, or by Andy Dalton. It will be difficult for the Bears to duplicate the same win total without a better passing game.

In the past Giants fans haven’t been thrilled with how Gettleman has run the Giants organization, but his moves have been spot-on this off-season. His shrewd trading this year has secured capital for the Giants in next spring’s NFL draft. Now the Giants have the resources to move up and select a premium player without mortgaging their future.