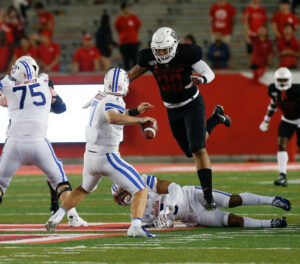 The New Orleans Saints 2021 NFL Draft class is officially here, which means it’s time to review how they did. The coaching staff, front office, and every member of the scouting department came together to pick what they believed to be the best group of players for this promising team. When all was said and done, the Saints made six throughout the rounds, obtaining the following players:

Should Payton Turner have been a first-round pick? That question is certainly up for debate, but one cannot deny that he will probably be the best player to come out of this class. The Saints have a type on the edge, and Turner’s  6’-6”, 268-pound frame definitely fits the mold of what Sean Payton and company look for in the position. While he is facing a long path to stardom, he should be a valued part of what is still a strong pass rush.

Despite being the best player in this class, it is still surprising to see Payton Turner selected in the first round. We already discussed why the Saints could be drawn to his frame and athletic numbers, but the actual on-field product leaves something to be desired. His fundamentals are a little sloppy, and he doesn’t have a second move when offensive linemen get their hands on him. If he doesn’t add another move, and fast, it’s hard to see him ever turning into anything more than an adequate starter. This doesn’t make him a bust by any stretch of the imagination, but you should shoot higher than this in the first round.

The Surprise: Only Six Picks

I suppose this isn’t too much of a surprise, as New Orleans is always one of the most aggressive teams in the league when it comes to trading up and getting their guy. However, it was surprising to see the Saints remain aggressive even after losing so much talent in the offseason. The bill finally came due for going all-in during the final years of Brees’ window, as backloaded contracts and a decreased salary cap led to a mass exodus of talent. With this in mind, one would assume that the Saints would have traded back, accumulated picks, and tried to get as many quality players as possible.

Instead, the Saints simply stuck to their board and continued to do what they always do. This strategy has obviously worked in the past, but it might not be the best idea for a retooling team like New Orleans.

Payton Turner and Pete Werner were both reaches (although Werner was far less of a reach), but Paulson Adebo has the potential to be one of the best picks in the entire draft. As mentioned in our NFC South Draft Grades, Adebo isn’t that far away from being considered one of the best cornerback prospects in his class. Injuries and a missed 2020 season completely destroyed his stock, but he could easily rebound and turn into an immediate contributor opposite Marshon Lattimore.

Most Likely to Turn Heads During Training Camp: Ian Book

The Drew Brees Era is officially over, which means the New Orleans Saints once again find themselves in the uncomfortable position of looking for a franchise quarterback. Jameis Winston and Taysom Hill will battle for the starting job, and it’s hard to imagine any world where Ian Book is anything more than the third-string quarterback. However, the Notre Dame product is capable of making some flashy plays, and could draw headlines during offseason practices. His two biggest weaknesses are his pocket presence and underwhelming deep ball, but those issues are easy to mask in practice.

We wrap up this Saints draft review with the players that didn’t quite fit any of the tiers above. Pete Werner has the potential to turn into a do-it-all three-down linebacker, but he probably won’t reach that ceiling as a rookie. The Ohio State product is already a good coverage player, which is great news in today’s pass-happy league. However, he struggles as a tackler and will need to add on some mass to survive in the trenches.

Landon Young has the size and athleticism to be a great tackle in this league, but he needs to learn how to actually play the position. He’s a long-term project that is probably better off on the practice squad, but he could turn into a good starter down the line if New Orleans can coach up his game. Kawaan Baker joins a wide-open wide receiver depth chart and could sneak on as one of the final players on the eventual 53-man roster.