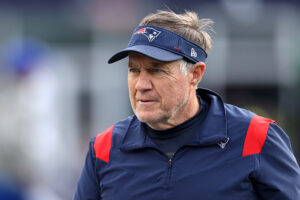 Just when some thought the New England Patriots playoff hopes were dead, they came back to life like Michael Meyers. Two weeks ago, if you were to look at their upcoming schedule and record of 2-4, it appeared they were not going to make the playoffs. One local sports talk radio host said their “path” to the playoffs was closed. Now, with two straight wins, the Patriots have reopened the “path” and the Patriots playoff hopes are alive and well.

It’s not just that the Patriots got their record to 4-4; it’s the way they did it, with back-to-back solid wins. They beat the New York Jets 54-13 and then traveled across the country and beat a good Los Angeles Chargers team. Yes, the Jets are only a two-win team now, but their wins over the division-leading Tennessee Titans and Cincinnati Bengals were quality wins. Scoring 54 points against any professional team is a great sign for New England. The Chargers looked like a probable loss on the schedule. Coming into the game, the Patriots were 4.5 – 5-point underdogs. The Chargers had already beaten the Chiefs and put up 47 points in a good win over Cleveland. On paper, Justin Herbert looked like he was going to shred the Patriots defense. After a brilliant rookie season, the Oregon product earned NFL Offensive Rookie of the Year and already is one of the top 10 QBs in the league. However, Bill Belichick’s defensive game plan was able to keep Herbert in check.

Having an Undeniable Advantage

The Patriots have an undeniable advantage at coaching in every game they play. They are mentally strict, never seem to beat themselves, and their situational awareness is second to none. It seems they sit back and wait for the other team to implode. That’s not going to happen every game, but often, it does. Yesterday, in the 4th quarter, the implosion came when Herbert threw a pick-six to Adrian Phillips. It was Phillips’ second interception of the day against his former team, and it was deadly. Those disastrous mistakes are the kind of plays the Patriots avoid and trick other teams into making.

The Stars are Aligning for the New England Patriots

Now, the upcoming schedule doesn’t look so ominous and the stars are aligning for New England. The Pats next three opponents are the Carolina Panthers, Cleveland Browns, and Atlanta Falcons. The Panthers looked like a tough matchup, but now they have come back to earth, and the Patriots open the week as 3.5 point favorites. The Browns are struggling at 4-4, and quarterback Baker Mayfield is battling a shoulder injury. The Falcons are a 3-4 team and may be without their star receiver, Calvin Ridley. If the Patriots can win two of these games, they will find themselves in the mix for playoff contention.

The Look of a Playoff Team

There are plenty of other reasons to believe the Patriots look like a playoff team, especially when you consider the Buffalo Bills aren’t running away with the division yet. The Patriots have to face them twice, and if they can at least split those games and take care of their other winnable games, they should make the playoffs. Their chances of winning one game against the Bills certainly look a lot better now. The team is starting to gel, and the offensive line has solved a lot of its issues. It wasn’t a perfect game; their red-zone problems are still there; Mac Jones didn’t have a great game, they left points on the field and still won. That’s an excellent sign; playoff teams need to be able to win in different ways. As for those issues, Belichick is acutely aware of them; that’s why he keeps a pencil behind his ear, and he’s on it.