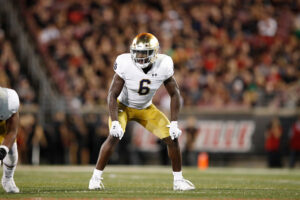 For the first time since drafting Drew Bledsoe in 1993, the New England Patriots drafted a quarterback in the first round. Now that New England has their quarterback of the future in Alabama’s Mac Jones, they can turn their attention to other pressing positional needs. There was a late run on defensive players before round one ended, but there are still many interesting names available on day two. As Jones is now the ‘guy’ in New England, the Patriots will need to focus heavily on building up the team around him, as he is not a truly electric playmaker. Whether through defense or offense, day two of the 2021 New England Patriots draft needs to feature a focus on acquiring the best available players. These players also need to be rookies who can contribute sooner rather than later.

Owusu-Koramoah is easily the best available player still on the board. While he played linebacker in college, he projects as a hybrid at the next level. Many, if not most mocks saw Owusu-Koramoah selected in round one. That he slid clarifies, perhaps, what teams valued most in this year’s first round. Despite being undersized for the inside linebacker position, Owusu-Koramoah earned the Butkus Award—for the nation’s best linebacker—in 2020. While he certainly projects more as a dimebacker than a traditional inside linebacker at the next level, it is surprising he was not selected in the first round this year.

Owusu-Koramoah is explosive, aggressive, and simply flies around the field making eye-popping plays. This has earned him comparisons to Jamal Adams and Derwin James from top draft analysts. Furthermore, Owusu-Koramoah is also a weapon in coverage. He has the size and strength to match up against tight ends and the speed and athleticism to cover running backs and some slot receivers.

Elijah Moore is another player who many expected to see taken in round one. Despite falling to the second round, Moore is an elite weapon in the slot and a technician within his routes. However, his diminutive frame may have been responsible for his slide. He not only tested well by running a 4.35 40-yard dash and a 6.66 on the three-cone drill, but his elite speed and quickness also readily appear on tape.

While he has not received the same level of attention as some of the other top receivers in this year’s class, he is every bit as deserving. His 40-yard dash time will catch eyes, but it is the three-cone drill that should turn the most heads. For reference, Julian Edelman’s 6.62 three-cone time is the gold standard when it comes to short-area quickness in route running, as well as in the slot. Moore does not lose speed or agility when strapping on the pads. He boasts elite change-of-direction speed coupled with strong hands that haul the ball in through traffic with ease.

Additionally, Ole Miss has recently gone on an impressive run in terms of producing high-end NFL pass-catchers. The recent successes of receivers like D.K. Metcalf and A.J. Brown should be taken into consideration when evaluating Moore.

Unlike Owusu-Koramoah, Moehrig is considered more of a traditional over-the-top safety. He has good size for the position coupled with impressive speed and athleticism. Additionally, Moehrig’s natural ball skills and ball-hawk instincts make him a perfect over-the-top, deep-centerfield safety. While he struggles at times with wrapping up on tackles, he still packs a punch. Additionally, he is a more-than-willing tackler when attacking the line of scrimmage.

Moehrig’s size and athleticism set him apart from the pack at his position, too. He has the versatility to align in the slot as well as match up with athletic tight ends. The young safety is another player who many projected to go in the first round, but the early run on offensive players and overall run on linemen likely pushed him down the board. Moehrig should play meaningful snaps during his rookie season. The team who drafts him with a day-two pick will draft a surefire steal.

The Patriots currently have the 15th selection in the second round— 47th overall. They also have the 32nd pick in the third round as a compensatory selection. Because that is a long wait between picks the Patriots generally avoid having, moving up in the second round is as likely as moving back. Given the names to have slid out of the first, Belichick could move up to take a top-rated defensive player. Additionally, following the retirement of Edelman, the Patriots did not exactly bring in the cream of the crop at receiver. As a result, the team could use a young offensive weapon to pair with their new quarterback. In other words, the Patriots have quite a number of good options at hand.