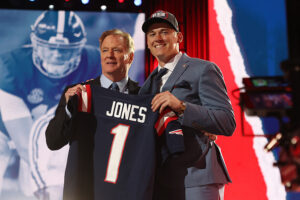 The New England Patriots 2021 draft is in the books and saw the franchise, in the middle of a rebuild, put blocks in place that should shape the team for years to come. The most pressing matter in New England has been the future of the quarterback position since the departure of six-time champion Tom Brady last year.

Bill Belichick wasted no time in answering that question with their first pick going to Alabama quarterback Mac Jones. The team was decisive with their selection, making it clear he was their choice to stand at the helm as they head into the new era of Patriot football. Through the remaining rounds, New England drafted additional players to address needs or add depth.

In all, they obtained the following players:

In round one, the Patriots select Alabama quarterback Mac Jones. The quarterback is coming off of a National Championship winning season, that he also was a Heisman finalist and consensus First Team All-American during. Although not overly athletic, Jones has impressive pocket skills and can get the ball into tight windows when under pressure.

There are concerns about Jones’ arm strength, though he is coming off of a historic season as a passer. At the same time, critics point to Alabama’s high-powered offense as a large part of his success. So, it will be up to Jones to prove he can fit into a team without explosive talent.

Having said that, the Patriots free agency additions to his receiving corps won’t hurt his chances. It also must be noted that Jones has proven he can get his targets the ball even when covered, completing 83% of his tight-window throws.

In fact, Jones is regarded as the closest thing to Tom Brady’s pocket passing precision and should be the perfect fit for New England’s offense should coordinator Josh McDaniels revert back to the offense he ran for Brady when Cam Newton‘s time as a starter is over.

It goes without question that Jones gives Newton stiff competition for the starting job. For now, Newton has public backing from Belichick, but if Jones impresses in training camp, he may not for long.

The 23-year-old from Oklahoma is not a head-scratcher in the traditional sense. It’s not difficult to make a clear case for Rhamondre Stevenson as a good signing for the Patriots. The 6-foot 230lb back has been likened to former power running back LeGarrette Blount and although he is not quite as big, he will add a different dimension to the Patriots current running game.

One of my fav prospects in #NFLDraft is Rhamondre Stevenson

6’0 245 old school style bruiser. My pro comp=Brandon Jacobs. Like Derrick Henry but not expecting that kind of dominance. He WILL have some power highlights in the #NFL

On top of that, he has the potential to be an effective dual-threat with solid pass-catching abilities, catching 18 passes for 211 yards last season.

What remains unclear is how he fits into an already crowded running back room in Foxborough. His draft selection casts a shadow on Sony Michel‘s chances to stay with some analysts claiming it means the team will not bring him back for his fifth year as Stevenson could be groomed as an early-down running back option.

There’s also uncertainty for veteran backs James White and Brandon Bolden if Stevenson is able to prove himself. With so many options still up in the air, it’s difficult to see how Stevenson’s selection impacts the team at this stage.

The Surprise: No Cornerback Drafted

There is no doubt that the Patriots have one of the most talented cornerback units in the league. Nevertheless, many anticipated the team to draft a young cornerback given some uncertainty for the future.

They may have a former Defensive Player of the Year in Stephon Gilmore and veteran J.C. Jackson but they are both in the final year of their respective contracts. Plus, Gilmore has been in plenty of trade rumors throughout the off-season. Do not be surprised if he is among veterans dealt in the future to secure a younger asset or draft capital.

The 2021 draft class was fairly deep for cornerbacks and with the likes of Patrick Surtain II and Jaycee Horn available, many predicted the Patriots would take a strong cornerback early with their first pick at 15. Rather, the Patriots decided to add depth elsewhere on the roster and so the future of the position in New England remains uncertain.

Ronnie Perkins was predicted by many analysts to go before pick number 50 in the 2021 NFL draft. He is one of the most explosive edge rushers in the class and sets the edge well. Perkins recorded 5.5 sacks in six games last season. His career number stood at 16.5 sacks and 10.5 tackles for loss in 33

Thus, it was no surprise the Patriots jumped at the 6-3 and 247-pound defensive end. The 21-year-old is an athletic, strong, and versatile player to the defense. If New England can ensure his off-field antics aren’t distractions, Perkins can be one of the best value picks of the draft.

Most Likely To Turn Heads In Training Camp: Christian Barmore

The only player the Patriots traded up to secure was the Alabama defensive lineman Christian Barmore. He was regarded by some as a potential first-rounder but when he was still up for grabs as the second round got underway, the New England Patriots made sure they nabbed him. Belichick dealt a second and two fourth rounds pick to obtain Barmore. Clearly, they see something in him.

It’s no secret that the Pats got destroyed by running games last season and it has been a clear priority to strengthen their defensive line. In Barmore, they have an explosive playmaker who has proved he can step up in the big games. It’s likely Bill will waste little time integrating him into their starting line-up.

As part of Alabama’s National Championship team, Barmore was crowned Defensive MVP with five tackles, two of which were for a loss, and a sack. He’s a big, tough player who can be agile when he needs to be.

Overall, he put up 63 tackles, 15.5 tackles for loss, 10 sacks, and three forced fumbles over the last two seasons as a defensive tackle. His efforts meant Pro Football Focus had him as the 20th best player in the draft class and he should definitely make an immediate impact when pre-season begins.

With their remaining picks, the Patriots looked to add depth with few significant impact players picked up. In the fifth round, they took Cameron McGrone out of Michigan – a good tackler who could prove useful on special teams but who has been plagued with injury.

McGrone is coming off a torn ACL so it’s difficult to see him being active this season but he may be one to watch if he rehabs well and capitalizes on his chance to develop and grow his skillset.

In the sixth round, the Pats added Missouri’s Joshuah Bledsoe, a versatile safety who has proven he can excel in multiple positions. He should help plug any gaps and support Devin McCourty and Kyle Dugger along with Jalen Mills and Adrian Phillips. Bledsoe could also develop into a replacement for when McCourty retires in the coming years.

With the 197th overall pick, the New England Patriots drafted William Sherman out of Colorado. Hoping to replicate the success they had last year when they drafted Michael Onwenu, Sherman represents an opportunity to lay strong foundations for their offensive line.

With their current depth, it appears New England likes Sherman as a developmental pick. However, his versatility could come in handy early. He played left and right tackle, as well as at guard during his high school and college years. Expect Belichick to exploit his skills whether as a backup or something more in the future.

With their final pick of the NFL 2021 Draft, the New England Patriots selected wide receiver Tre Nixon. Many expected the Patriots to take a wide receiver much earlier this year after the retirement of veteran Julian Edelman. They have made moves to fill his role, but it is worth noting Nixon’s draft position. He is a playmaker and could be the team’s next Edelman. With his speed and agility, Nixon has the potential to keep the pressure on those above him on the roster. There’s nothing like a bit of healthy competition to push good players to excellence.

Be sure to keep up to date with all the latest NFL news by visiting our Facebook site here.