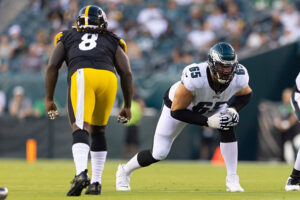 The Pittsburgh Steelers pulled off a surprising win on the road against the Buffalo Bills to open their season. After being shutout in the first half, the Steelers came back from a 10-point deficit to win the game 23-16. Offensively, the Steelers struggled, as was expected of them coming into the season. The defense, on the other hand, put together one of their best performances in a long time, which is a powerful statement given the strength of Pittsburgh’s defenses over the past few seasons. Though many players stepped up in a big way, off-season addition Melvin Ingram showcased why he was such a valuable pickup for the Steelers.

Overall, the Steelers defensive front looked like the best unit in football against Buffalo. Despite only scoring three sacks, the defense had Bills quarterback Josh Allen under pressure all game. On top of the three sacks, Allen was hit eight times, five of which were courtesy of T.J. Watt. Further, the Bills offensive linemen were called for holding six different times throughout the game. At times, their strategy appeared to be “hold and hope we don’t get called.” When the Steelers pass rush was really clicking, Buffalo’s options seemed to be hold or give up a sack.

Looking at Ingram specifically, he didn’t stuff the stat sheet but still had a huge impact on the game. As a pass rusher, his only statistical impact was a hit on Josh Allen. However, Ingram was held at least twice throughout the game. On one play, Ingram almost certainly would have finished a sack on Allen if he wasn’t thrown to the ground by his neck. He was giving the Bills offensive tackles nightmares all game long. Though he wasn’t statistically the standout player of the day, Ingram turned in a phenomenal performance in his Steelers debut.

Melvin Ingram provides two very important attributes to the Steelers defensive front: depth and versatility. As for depth, Ingram will play behind Watt and Alex Highsmith when Highsmith fully recovers from his groin injury. At that point, Ingram will be the primary backup for each pass rusher. His ability to play on either side of the line is of extreme value to the Steelers; beyond him, their outside linebacker depth isn’t great. But having a trio of Watt, Highsmith, and Ingram is plenty. As long as all three are healthy, that’s likely the best group of edge rushers on any team in the NFL.

In terms of versatility, the presence of Ingram opens up the defensive playbook for Pittsburgh. Though he does his best work on the edge, T.J. Watt sometimes will stand up over the center, adding a wrinkle to Pittsburgh’s elite pass rush. In the past, this alignment would leave a weakness on the left edge where Watt usually lines up. Now, that’s not a worry, with Ingram able to step in and help get after the quarterback. This grouping is especially important presently, as Stephon Tuitt will be out at least through Week 3 with an injury. Tuitt is valuable as a pass rusher, and being able to play Watt, Highsmith, and Ingram all at the same time helps replace some of what they miss from Tuitt. When Tuitt returns, that trio will still see the field together occasionally, but probably not often. For now, though, the team can use that personnel grouping effectively.

As the season progresses, Melvin Ingram will continue to prove his value. If he keeps up his Week 1 performance, Pittsburgh could end the season with the best defense in the league. Aside from a few lapses, they stopped the run well against the Bills. The secondary looked solid, but the defensive front was the clear standout unit. When fully healthy, a front four or five that includes some combination of Watt, Tuitt, Cameron Heyward, Highsmith, and Ingram will give fits to any team, regardless of the caliber of their offensive line.