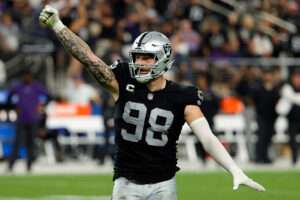 Make it three years in a row now that the Las Vegas Raiders have opened the season with a victory. Even despite struggling early, the Raiders managed to hang on with the Baltimore Ravens. While many factors can be attributed to the win, it is clear that Maxx Crosby was one of the biggest contributors.

Maxx Crosby has been a budding star since entering the league back in 2019. On Monday night, he balled and solidified himself as a force to be reckoned with. Any time Lamar Jackson dropped back to pass, Crosby was there. Whether he lined up on the left or right side, Crosby was getting to Jackson all night. He had two sacks, six total tackles, and 13 quarterback pressures on the night. His 13 quarterback pressures are the most in the league following the conclusion of Week 1. Crosby has now become someone offensive coordinators most scheme away from. To think he went in the same draft as Clelin Ferrell, who was a healthy scratch last night, generates a mixed emotional response at best for this Raiders fan.

The most underrated signing of the 2021 off-season was not a player, but a coach. The Raiders signed Gus Bradley in the hopes of turning around a historically bad unit that was completely mismanaged in the three years prior. If you watched any Raiders football last season, then last night you will have noticed a night and day difference between the defense. The players look more energized and significantly improved. The defensive line generated pressure on over 50% of Jackson’s drop-backs. Even despite giving up 27 points, it may have been their best performance since the arrival of Jon Gruden. Imagine if he hired Gus Bradley from the start.

Darren Waller is making his case for best tight end in the league. There was no surprise as to whom Derek Carr was staring down on almost every pass play. The Ravens defense knew this and could do nothing about it. Waller had an astonishing 19 targets on the night for 10 receptions, 105 yards, and a touchdown. To add the cherry on top, he is top-tier at run and pass blocking for the position as well. Except a contract extension to come soon for this superstar.

This was easily one of the most wild and entertaining Monday Night Football games you will ever see. All of the emotional highs and lows in such a short span of time is mentally exhausting, but also part of why we love this sport so much. Do not let anyone tell you that the Ravens alone lost this game. The Raiders deserve credit for how well they played against a Super Bowl favorite. It may only be the first game, but you can see the improvements on the defense thanks to Gus Bradley. You can see the emergence of Waller as one of the very best tight ends in the league. You can see the young draft picks of Mike Mayock developing in front of your eyes. Much like tonight, this season will be filled with a lot of highs and lows. However, in the end, if they continue to play like this, the Raiders will emerge from this regular season with a playoff berth. Now on to Pittsburgh.