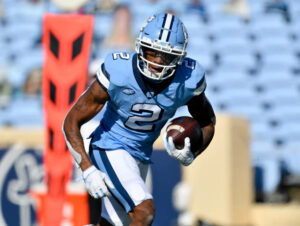 After a dispiriting 2020, the long-awaited and almost-normal 2021 NFL Draft has both fans and franchises more cranked up with each passing day, with the possible exception of laid-back southern California. But don’t let the Zen of their Malibu war room location fool you, Les Snead and Sean McVay won’t be sporting Speedos by the pool unprepared in this Rams mock draft.

Almost automatically expected to be one of the league’s main aggressors in free agency these days, the Los Angeles Rams made just one major splash in the pool of acquisitions. Ex-Detroit Lions quarterback Matthew Stafford, that whale-sized splash, brings expectations of the team propelling themselves deep into postseason play. Enough star power is certainly secured. To be the team to knock Tom Brady and the Tampa Bay Buccaneers from atop the NFC championship throne, the best supporting possible cast is needed.

McVay’s repeatedly conveyed his urge for more offensive explosiveness next season. Draft misdirection aside, it’s difficult to buy a mock draft that has the Rams selecting a center at their first pick, the 57th overall on Day Two. That said, a move upward to take a highly-regarded but stock-dropping center should surprise no one. Such inspiring acts are too hard to insert in mock drafts. Let’s go with the usual overconfident personal perception for what is probably going to be your final Los Angeles Rams 7-round mock draft.

Dyami Brown is considered one of the most dangerous deep ball threats in this year’s class, “the best deep threat” according to NFL Network Draft Insider Bucky Brooks. He’s projected to be a second or third-round pick. His speed is deceiving in that he doesn’t have great small area quickness (quick-twitch ability) in the open field. Still, his pro day 40 time (4.4) suggests speed is there. What he’s put on tape reveals greater upside than most of the receivers to be selected in the first two draft days. This is because he has yet to sharpen a complete repertoire of routes and abilities.

He can and will go across the middle, it’s not heart that he lacks. In his college program, it might have been simply that he was needed to do one thing with little regard to his future. NFL coaching, McVay’s to be exact, is bound to yield significant dividends. Additionally, sitting behind DeSean Jackson for at least half a season (longer if Jackson’s health holds up) is ideal. He’s smart and does all the work to improve. His separation ala a next-level studder step lures defenders into thinking the ball’s going elsewhere. Before they know it, Brown’s blown five yards past. Then you see his ball-tracking ability and high-point battling in action and you can’t help but also see Stafford celebrating six points. As of now, he’s just a raw but confirmed deep ball specialist with a knack for finding the endzone. All the Rams really need him to be at the moment.

A ‘feel good’ story resides within the depths of this big guy’s motivation. In short, if a doctor had his way Trey’s birth into this world would never have happened. He was projected to have Down Syndrome and his mother was advised to abort her unborn child. Thank the heavens she believed her son was special because here he is, an inspiration, considered one the nation’s best centers.

Listed between 6’3 and 6’4″ and weighing anywhere from 319 to 330lbs, Hill moves well for his size. On the Rams, this is extremely important because theirs is a system of movements. His lower-body thickness helps anchor him on the line and enables him to handle bull rushes. Maintains blocks well in down-field movement and is highly effective in the ground game. Former Ram Malcolm Brown would have appreciated him a bit more than Cam Akers.

At the next level, the kid will need to tone his body somewhat and keep his weight from being an issue. His balance, possibly because of his weight issue, needs to improve as well to keep him from leaning over his toes. Still, on an offensive line that was solid enough to have scouts come to see two or three others only to notice the center as well, there’s got to be upside here.

It’s easily imaginable that Sean McVay won’t be more nervous at any point this weekend than when he finally has this player in his crosshairs. Receiver Anthony Schwartz, one of the fastest players in this year’s class, has “MCVAY” written all over him. Think, a much speedier Cooper Kupp but not as polished. Unlike Kupp, however, Schwartz can be the wideout blowing tops off defenses. That’s not happening soon, he’s a work in progress but I can easily see McVay going all-in on this project. McVay loves a quick, smart receiver and this kid was correcting his coach’s play-calling at age 9. Personally, I’m seeing him more as McVay’s Christian McCaffrey.

Don’t be surprised if Schwartz gets selected by any team early despite his shortcomings because 4.26 40-speed is just too fast to pass up too long. Obviously, special teams is an option while he develops receiving skills and the Rams are looking for more explosion there. But the kid would flourish in the slot if there’s an injury. And again, I can’t help but sense the connection coach McVay has with bringing out the best in these types of players. Then there is the fact that the kid excels in the misdirection and trickery plays McVay loves to run.

Divine Deablo. Without a doubt one of the best names to enter the NFL in…forever. Not the perfect selection if the goal is to replace Ex-Ram safety John Johnson III. My point exactly, the goal is to beef up the secondary with a hybrid type. He plays the run with linebacker mentality. And just when you think you got his number, he intercepts a pass with fluid movement that makes you question yourself. Also a ball hawk, he’s collected four picks and two pass breakups in 2020.

On a team like the Rams, he may never be a full-time starter if all goes as planned. With their pending explosiveness, teams will have to play catch-up more than not, making them throw often. Deablo excels in the run game with above-average instincts. Improving his route recognition would certainly help but he’s likely to be stuck with physical limitations with a 6’3″, 226lbs frame. He’ll easily make an NFL team’s special teams squad but to limit him to that is a wasted draft selection. Oh, but if you’re a youthful-thinking coaching staff with vision you just might lean him towards linebacker.

Don’t be surprised if this under-experienced but talented young player has a long successful NFL career. Drafting him in this spot, a team could end up with one of the steals of the 2021 draft class. Shemar Jean-Charles, an cornerback out of  the often-overlooked Appalachian State, has natural ability with considerable upside.

His disruptive style of play boasts the knack for breaking up pass completions on arrival. This sometimes works against him because he’ll depend too much on it allowing passes to get through at the next level. What does extremely well is take advantage of average to bad quarterbacks with ball flight recognition. More specifically, he’ll turn into the receiver and often find himself in better position the player he’s defending. Jean-Charles has quick feet and his read time is better than average for a player projected this late in the draft. He mirrors or plays off man with equal confidence but will need to remember his level of competition. That said, how far he will go in the NFL will be aided tremendously by how hard he works to improve.

Meet Wisconsin’s former OT, Cole Van Lanen. TheDraftNetwork’s Kyle Crabbs describes him as “an absolute load coming off the snap. He’s got natural power for days thanks to his foot drive and mass…” #LARams pic.twitter.com/lDbngA1Lxu

Cole Van Lanen may be the forgotten man of this year’s draft class and is a great way to finish this Rams mock draft. Once peaking in draft projection rankings as high as 172, he’s now in round 7 range. This could be someone’s loss, however, because he will certainly bring experience with four and a half years at Wisconsin.

Van Lanen is perfect for what the Rams do with both zone and gap schemes. Described as ‘a load’ and ‘fires off the ball’ signals he’s considerably stronger in the run game than in the passing game. This will get him shifted to the interior. For a team with plentiful late leads and looking to run down clocks, he’d be a great add in depth. And despite his experience, there is upside to work with under McVay. He could almost-easily win a spot on the roster.