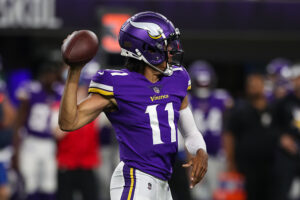 After three preseason games, the Minnesota Vikings and the rest of the NFL have officially completed the string of exhibition games leading up to the start of the 2021 NFL regular season.

Minnesota finished the trio of preseason games against the Denver Broncos, Indianapolis Colts and Kansas City Chiefs with a record of 0-3 overall, which obviously isn’t the type of performance the Vikings were trying to compile. Minnesota now will shift its focus to the games that count when its season opens up in Week 1 on the road against the Cincinnati Bengals at noon on Sept. 12 at Paul Brown Stadium.

Now with the preseason schedule completed and the regular season next in line, let’s come up with some key takeaways from the three games now with the real deal set to begin for the Vikings in Week 1.

Backup Quarterback Might Be One of the Biggest Offensive Questions

There are a few question marks remaining for the Vikings going into the regular season, and one of those questions on the depth chart comes at the quarterback position. The starting role under center is set with Kirk Cousins once again holding that title in 2021, but the backup and third-string spots are still up for grabs it appears.

Going into the preseason, many viewed rookie Kellen Mond as the succession plan and the backup with Jake Browning likely to serve as the third-string quarterback. Through the three-game preseason schedule, neither quarterback really impressed during extended time on the field for Minnesota.

After the preseason concluded, Browning was actually waived by the Vikings, leaving just Cousins and Mond on the roster before Minnesota signed former backup Sean Mannion after he was cut by Seattle.

The preseason was up-and-down for both quarterbacks, both of which Minnesota hopes won’t have to play huge roles in 2021 assuming Cousins can stay healthy in the starting role under center. If Cousins does miss time with injury, however, the Vikings will have to try and rely on Mond and Mannion to step up more than they did in the preseason.

Defense Will Be Improved in 2021

To say the 2020 season was a disappointment for the Vikings on the defensive side of the ball would be an understatement, with that unit flooded with injuries and missing pieces throughout the year resulting in a step back in an area of the team that has traditionally been a strength.

Key players such as Danielle Hunter, Anthony Barr and Eric Kendricks missed extensive time due to injuries, resulting in a wave of youth and inexperience having to step up for Minnesota to try and stop opposing offenses.

In 2021, the Vikings are hoping a revamped defense will lead to improvement, and with some new faces joining the team and injured players from a year ago finally returning, we got a look at that improved unit to some extent in the preseason.

Although a bulk of the starters who will take the field for Minnesota on defense this season didn’t play a large amount in the preseason, the Vikings unit already looked improved to some extent in the three games leading up to the start of the regular season. Now, the Vikings only hope that continues to improve when the real games begin this month.

As far as how the defense will look, players such as Michael Pierce, Hunter and Dalvin Tomlinson will headline the defensive line. Minnesota also added familiar faces Everson Griffen — who was waived at the end of the preseason but since re-signed before the start of the regular season — and Stephen Weatherly to help that group. The Vikings added other players this offseason as well, including the likes of defensive backs Patrick Peterson and Bashaud Breeland who will bolster the back end of the unit.

The end result is an impressive group on paper, and Minnesota hopes that will lead to a bounce-back performance on defense in 2021.

It Was Just Preseason

The biggest takeaway from Minnesota’s preseason is it was just that, preseason. Yes, the Vikings would have liked to put together a good showing in the exhibition games, but don’t look too much into the winless performance for the purple and gold.

As we saw with other teams throughout the NFL, many of the Vikings key players on both sides of the ball didn’t play much, if at all, in the three contests. It’s hard to fully evaluate a team in the preseason, especially these last few seasons with most of those players not taking the field or seeing much time to try and avoid injuries before the start of the regular season.

Minnesota should have a bounce-back season in 2021, at least compared to what we saw a year ago, and the real test and time to evaluate the team will come during the opening week against Cincinnati.

With the preseason now over, although it was a rough showing for the Vikings while finishing it with an 0-3 record, don’t look too much into how the team performed during that period. The real measuring stick will come starting Week 1 on the road against the Bengals.