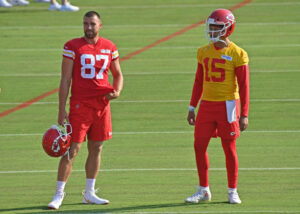 After a disappointing finish to an otherwise fantastic season, it’s finally time for the Kansas City Chiefs to get back to work. The Chiefs loaded up in the offseason, but they’ll have to face a first-place schedule. In this Kansas City Chiefs record prediction, we’ll take a look at each game and see how the schedule shapes out.

The Cleveland Browns are one of the best teams in football and won’t go down without a fight. Top to bottom, it’s hard to find a weak spot in this roster. The defense is absolutely loaded with talent, Baker Mayfield looks legit, and the running game and offensive line are among the best in the league.

However, none of that really matters when Tyreek Hill, Travis Kelce, and Patrick Mahomes are on the opposite sideline. If Odell Beckham magically finds his old form in Week 1, then perhaps Cleveland pulls off the upset. However, that’s not particularly likely

The Chiefs are getting the Ravens at the right time. Already decimated with injuries, Baltimore will be without Marcus Peters, Rashod Bateman, and three of their top four running backs. Lamar Jackson has a tough time going blow-for-blow with Mahomes under ideal circumstances, and these are not ideal circumstances.

Justin Herbert proved all the doubters wrong last year, and he should only be better during his sophomore campaign. The Chargers almost beat the Chiefs in their lone meaningful matchup last year, so this one should go down to the wire. However, home-field advantage gives this one to Kansas City.

After stringing together three hard-earned wins, the Kansas City Chiefs face a much easier opponent in the Philadelphia Eagles. Jalen Hurts is anything but a proven commodity, but even if he turns out to be good, this roster is lacking in talent. Barring something completely unforeseen, the Chiefs should stroll to an easy victory here.

Week 5 brings arguably Kansas City’s hardest test to date. While the Chiefs comfortably beat the Bills in the AFC Championship Game, Buffalo should put up much more of a fight this time around. This offense is one of the few capable of keeping up with Patrick Mahomes, and the defense should be better in 2021 than it was in 2020. The Chiefs could pull off a victory here, but you can’t win them all.

The Washington Football Team has a great defense, but no defense can stop this offense when the offensive line isn’t missing four starters. Good Ryan Fitzpatrick might be able to trade blows in a shootout, but the Jekyll and Hyde quarterback is just too inconsistent to expect a close game.

On paper, the Tennessee Titans have one of the best offenses in football. Ryan Tannehill has been one of the most efficient quarterbacks since joining the Titans, and the receiving duo of A.J. Brown and Julio Jones is unmatched. Oh yeah, and their running back is pretty good.

The Titans will put up points, but their defense is so terrible that I genuinely don’t know how they plan on stopping Kansas City’s passing attack. Bet on the Chiefs to win, and take the over.

The New York Giants are doing everything in their power to make Daniel Jones into a franchise quarterback. However, unless he makes a massive leap, a quarterback like this with an offensive line that bad won’t stand a chance against the AFC juggernaut

Nobody would be too surprised if this game ends up being a Super Bowl preview. Aaron Rodgers is back for (at least) one more run, and he still has a great offensive line, a reliable defense, and Davante Adams. This is going to be must-watch football between two of the games very best.

For the second year in a row, Aaron Rodgers’ receivers lost the most yards in the league to drops: 552 yards.

That was more than 100 yards than second-placed Patrick Mahomes who threw 97 more passes than him. pic.twitter.com/VuCqIo0ydn

The Las Vegas Raiders might just have the worst roster this side of Houston and Detroit. Derek Carr is a solid quarterback and Darren Waller is a stud, but who else stands out on this team? Vegas gave Kansas City all they could handle last time, but this talent disparity between these two rosters is just too high to be ignored.

This game is going to be very similar to the Titans game. Dak Prescott and this talent-filled supporting cast have the potential to score basically at will. However, the truly atrocious defense should give Kansas City the edge in this one.

If you took quarterback out of the equation, the Denver Broncos would have a top-10 roster in football. Unfortunately for Denver, quarterback is the most important position in the sport, and Teddy Bridgewater or Drew Lock simply aren’t good enough to pose a serious threat

The Raiders are still awful, and this time they don’t even have home-field advantage. Good luck, Gruden

I let home-field advantage be the tiebreaker in the first matchup, so it’s only fair the Chargers get the win this time around.

The Steelers are commonly associated with old-school football, and with good reason. The defense is stacked at all levels, and they just drafted a running back in the first round. This team-building formula can win some games, but it’s not going to be enough to beat an elite team in today’s NFL. Ben Roethlisberger and that terrible offensive line simply won’t be able to keep up with Patrick Mahomes.

Joe Burrow showed some flashes during his rookie year, and playing a game this late in the season should give him plenty of time to knock off the rust. Unfortunately, it won’t be enough, as Cincinnati didn’t fix nearly enough of their issues over the offseason. Even with a solid quarterback and reliable weapons, the Bengals aren’t quite ready for a challenge like this.

For the sake of this record prediction, we’ll assume the Chiefs haven’t locked up home-field advantage and are actually trying to win. Playing in Denver will make it harder, but the Chiefs should still walk out of this one with a win.