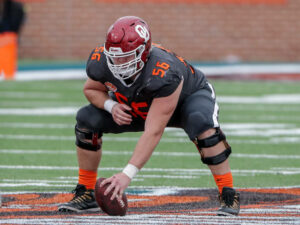 The Kansas City Chiefs 2021 NFL Draft class is officially here, which means it’s time to review the picks. The coaching staff, front office, and every member of the scouting department came together to pick what they believed to be the best group of players for this promising team. When all was said and done, the Chiefs made six throughout the rounds, obtaining the following players:

The best draft picks happen when need and talent align, and that’s exactly what happened with the Creed Humphrey selection. In the course of just a few months, Brett Veach has completely rebuilt the offensive line into one of the top units in football. Kansas City’s offensive line was solid throughout the vast majority of 2020, but it didn’t have the depth to survive multiple injuries. That shouldn’t be a problem now, as this unit has an above-average or elite starter at every single position.

Listing Nick Bolton as a surprise might imply that he wasn’t worth a late-second-round pick, and that couldn’t be further from the truth. Bolton is a fine player in his own right, as he’s solid in coverage with the ball skills and instincts to succeed in zone. However, he’s not going to be a superstar, and the Chiefs aren’t exactly dying for linebackers.

At this point in the draft, the Chiefs could have gone with wide receiver Terrace Marshall Jr. For those unfamiliar with the prospect, Marshall had a first- or early second-round grade from just about everyone and would have been a perfect fit for this offense. There isn’t much of a supporting cast beyond Tyreek Hill and Travis Kelce, and Marshall’s presence would have made this offense all-but unstoppable.

Creed Humphrey makes his way onto this list for a second time. The Kansas City Chiefs lost the Super Bowl largely due to an inability to protect Patrick Mahomes. While injuries were the primary culprit for this terrible performance, Brett Veach and company have done everything in their power to make sure it never happens again. Arguably the best center in the class, Humphrey should be able to start right away and perform at a high level – you’re not supposed to be able to find players like that this late in the second round.

Putting Orlando Brown Jr. on this list might be cheating, as the superstar left tackle technically wasn’t a part of this draft class. However, Kansas City moved their 2021 first-round pick in exchange for his services, so I feel this is a justified inclusion. Brown is one of the best left tackles in the league and, after watching Patrick Mahomes run for his life in the Super Bowl, is going to be one of the most beloved and important members of the team. Everyone knows he’s going to be great, but it will still be a blast watching him absolutely pulverize enemies in scrimmages and one-on-one drills.

From an athletic standpoint, Joshua Kaindoh has everything you need to be a successful edge rusher in the NFL. His measurements are all solid, but the on-field product leaves a lot to be desired. Injuries and inconsistency are littered throughout his tape, but perhaps better coaching can help him reach his potential. Noah Gray is a similar prospect, as he has plenty of athleticism but has a lot to learn about actually playing the position.

The Chiefs need another weapon, and Cornell Powell will have the opportunity to compete for a major role in this offense. However, his advanced age and late-career breakout imply that he’s not going to handle life in the NFL all that well. Trey Smith is a great late-round gamble, as health issues caused him to fall. His tape is much better than his draft pedigree would suggest, and he’s a great insurance policy should injury strike the interior offensive line.