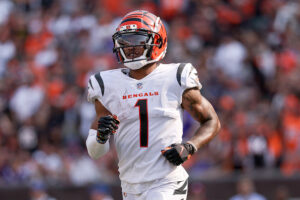 The Cincinnati Bengals wide receiver Ja’Marr Chase shined in his rookie debut against the Minnesota Vikings. The fifth overall pick in 2021 was fantastic and came up big to help lead the Bengals to victory in Week 1. When the Bengals drafted Chase, it made quarterback Joe Burrow very happy. The duo absolutely dominated college football in 2019 en route to a National Championship at LSU. The Bengals coveted the speed and big-play ability of Chase in hopes to recreate the LSU magic. Last year, the Bengals consistently tried to get A.J. Green involved to help the offense go and try to be a threat on the outside. It never panned out and when Green departed this off-season the plan was evident to find his heir apparent. That player is Chase and he delivered to give the Bengals something they’ve been missing.

In the preseason, Chase had his share of struggles and drops leading up to Week 1. Chase was working hard and staying late after practice catching pass after pass and even had a jugs machine delivered to his house. Head Coach Zac Taylor and Burrow were not concerned as they were confident that Chase would be ready and firing on all cylinders against the Vikings. The coach and quarterback were 100% correct.

Chase torched the Vikings for five receptions, 101 receiving yards, and a touchdown on a beautiful 50-yard pass from Burrow in the second quarter. Chase gives the Bengals a multitude of options in 11 personnel and can be the legit weapon and number 1 receiver they were banking on.

The Bengals have a powerful four-headed offensive monster in Chase, Tee Higgins, Tyler Boyd, and Joe Mixon. This offense has the ability to attack defenses in many ways with varied concepts in an effort to score points. The X-Factor of the group is Chase and his ability to win deep on the outside and when the ball is in the air.

.@Real10jayy__ saw that ball and took it to the HOUSE.

The slight shuffle off the line here and then, the burst to just run right by and toast Bashaud Breeland is something defenses will have to game plan for the remainder of the season. This, in turn, may open up the middle of the field for Boyd and shift coverage away from Higgins who is more than capable of winning one on one matchups.

Last year, Burrow noted, “this is probably a game we don’t win last year.” This year’s team is built differently. They are confident, fearless, and going to win or lose on their terms. Chase brings the LSU swagger and confidence with him that Burrow also exudes. It’s rubbing off on the team and even in Taylor as he stated “I just told our team we’re going to be aggressive, man, we’re going to go for it on fourth-and-one and try to take the game and we’re going to be aggressive on defense and try and send a message and end it right there too.”  This aggressive version of the 2021 Bengals is what you’re going to get. Attitude is critical in the NFL and winning or losing on your own terms certainly beats the alternative.