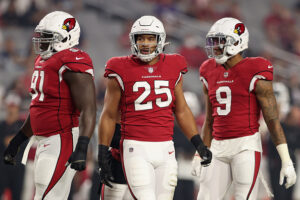 The Arizona Cardinals spent their last two first-rounders on two exceptional players with almost-limitless ceilings. Isaiah Simmons and Zaven Collins are the future at inside linebacker for the Arizona Cardinals, and their talent has been evident during their relatively short tenures in the desert. However, as the Cardinals head into the latter half of the season, it seems that the declarations made on draft night are yet to be fully realized.

Simmons’ role has grown exponentially. He is, for many, the most improved player on the team, if not on an even wider scope. After a tough rookie campaign, Simmons is starting to show his top-10 value. Simmons’ trajectory bodes well for Collins’s sophomore campaign, as he is currently enduring a similarly barren rookie season. Simmons and Collins are the future for the Cardinals, but as it stands, they’re a little short of being the now.

Isaiah Simmons and Zaven Collins Are the Future, Not the Now, For the Arizona Cardinals

Simmons Is Most Improved

Isaiah Simmons is having a good year. He’s being exactly what the Cardinals need him to be: a solid player. The knock against Simmons has always been along the lines of a ‘Jack of All Trades… Master of None’ moniker. Indeed, that may have been true of his rookie year, as the Cardinals figured out what they wanted to do with him. However, they drafted him as a middle linebacker. That was always the projection and, now the Cardinals have focused on that, they’re figuring out how to utilize his safety and edge-rushing skills from an inside linebacker base.

Middle linebacker is where Simmons’s athletic skills look the most freakish; his sideline-to-sideline speed is drawing national plaudits, with his athletic ability starring in some excellent performances. He’s shed this ‘situational’ tag and established himself as a true three-down linebacker. He shut down early doubts about his run defense Week 1, contributing to Arizona’s suffocation of Derrick Henry; Henry’s season so far shows just how impressive that was. More highlight collisions, like against Trey Lance on the goal line, have quelled questions about his three-down ability.

There’s been good and bad for Simmons this year. Recency bias, maybe, but Simmons was a notable underperformer against the Carolina Panthers last week. The big day for Christian McCaffrey doesn’t reflect well on Simmons; his athleticism at linebacker is expected to be an antidote to the matchups that players like McCaffrey present. Now, it’s questionable as to how responsible Arizona’s defense was for the way the game played out, but it didn’t look good. Simmons is a second-year player, and even that’s a bit unfair, given how little he played as a rookie. He’s still got room to grow, but Arizona are starting to see a promising level of consistency out of Simmons.

It was certainly bizarre when Steve Keim anointed Zaven Collins on draft night. Now, every GM wants to think their pick, especially a top-15 guy, is the heir-apparent. The idea is that this will still materialize. For now, though, Zaven Collins has still got a little bit to do. Collins’ rookie season is really playing out much like Simmons’; he’s being used sparingly, and ostensibly being kept out of the team by the man he was expected to replace. Jordan Hicks has been one of Arizona’s most quietly impressive defenders this season, not least because Keim kicked him to the curb.

Again, like a rookie Simmons, Collins has popped up a couple times and looked pretty good. Against the Tennessee Titans, he came up with an early run stop that seemed to suggest he’d walk into the lineup week after week. Even when Hicks’ play brought him back into the fold, the expectation was that Vance Joseph would scheme all three linebackers onto the field at once. Yet the consistency that has arisen in Simmons is yet to manifest in Collins. It’s definitely troubling that not only is Hicks keeping him off the field, but Kliff Kingsbury noted that Tanner Vallejo had earned playing time over Collins.

Like Simmons and the rest of the linebacking corps, he had a rough day against the Panthers. Losing contain on and getting stiff-armed by a fresh-off-the-couch Cam Newton for a touchdown certainly didn’t do him any favors. Being kept out of the team by Vallejo, a career backup, is even worse. Collins has to do better.

Simmons and Collins Are the Future; It’s All Part of the Plan

Simmons is a significant piece at the core of Arizona’s defense. He’s a vital part of the unit’s ascendency to the top of the league rankings. A consistency in play has been rewarded with a consistency in playing time, where both were lacking in 2020. Securing a solid middle linebacker base was important to Simmons’s development. Achieving this quickly has allowed the Cardinals to exploit Simmons’ extensive skillset all over the field. He’s the most improved player on the team, if not even one of the most improved players league-wide.

Those already doubting Collins should look to Simmons for encouragement; it’s clear that, given the luxury of Hicks’ improvement, the Cardinals have the ability and the intention to slow-play Collins. Whether that’s because Collins isn’t good enough to start, or whether the Cardinals are just making the best use of their luxuries is unclear, but it’s a good learning situation for Collins. Heavy is the head that wears the green dot, and Collins will benefit from the chance to develop slowly. It’s clear, looking at his snap counts, that the Cardinals are willing to give Collins his chances playing against lesser sides, holding him out against teams with more complex schemes, like the Los Angeles Rams.

Cardinals fans who want to see more of Zaven Collins should know this: if he’s on the sideline, he’s not ready to be on the field. He has the talent to be effective on certain plays, if maybe not the experience to do so on every play; on the back end of the season, the Cardinals can get him involved a little more, and try to integrate some of that situational usage that benefitted Simmons as a rookie. Conveniently, the Cardinals have the Seattle Seahawks coming up.

The post Isaiah Simmons and Zaven Collins Are on Their Way to Their Potential appeared first on Last Word on Pro Football.