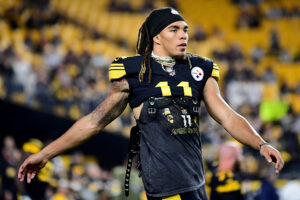 The Pittsburgh Steelers enter Week 10 with a great chance to take claim over first place in the AFC North. All they have to do is secure a home victory against the winless Detroit Lions. With an almost-clean injury report, the Steelers will only be without wide receiver Chase Claypool in the contest. Being down a wide receiver isn’t typically a big deal, but with JuJu Smith-Schuster out for the year, Pittsburgh’s wide receiver room is getting thin. It’s as good of a week as any to be short-handed, but the Steelers will still need to do a good job of replacing Claypool in their offense.

Chase Claypool to Miss Week 10: How Pittsburgh Can Replace Him

While Pittsburgh certainly isn’t a deep-passing offense, every team needs to be able to push the ball down the field. On the rare occasions that Ben Roethlisberger completes deep passes, Claypool is typically one of two receivers on the other end, with the other being Diontae Johnson. Without Claypool, expect James Washington to step up and be a weapon in the Steelers deep passing game. After Smith-Schuster went down, Washington originally was seeing a surprisingly low amount of snaps. That rapidly changed, and Washington is now seeing the field much more frequently. He is a quality receiver with good hands and a physical presence that Pittsburgh greatly lacks without Smith-Schuster and Claypool.

Fortunately for the Steelers, a receiving duo of Johnson and Washington should be plenty good to get past the Lions. Roethlisberger shouldn’t be under much pressure during the game. Washington and Johnson will be able to get open downfield, and Roethlisberger should have time to find them. He just needs to throw the ball accurately. Johnson is already Roethlisberger’s favorite target, so he will likely see an absurd amount of targets. He’s a great route runner and will get open more consistently than Washington, but Washington will still get his share of looks.

With Chase Claypool set to be a gameday inactive, expect Anthony Miller to be activated from the practice squad to the gameday roster. The Steelers signed Miller after Smith-Schuster went down for the season, and it has been a bit of a surprise to not see him get a helmet yet. He’s the best true slot receiver remaining on the Steelers roster. Especially with Ray-Ray McCloud being far from impressive, Miller could have a chance to earn himself more playing time.

Expect Washington and Johnson to play almost every snap on the outside of the Steelers offense. Johnson consistently plays over 90% of the team’s offensive snaps, and Washington is the best remaining option to play on the outside. Between McCloud, Miller, and Cody White, someone will need to step up and make some plays out of the slot. It’s a great chance for three young players to prove they are capable of being key contributors to the offense, and maybe even secure some playing time after Claypool returns from his injury.

The post How the Pittsburgh Steelers Can Replace Chase Claypool in Week 10 appeared first on Last Word on Pro Football.