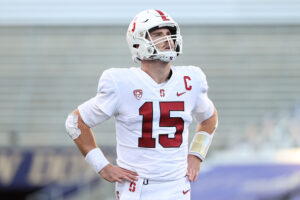 The Houston Texans 2021 NFL Draft class is officially here. It’s time to for a Texans draft review. The Texans made only five picks throughout the rounds, obtaining the following players:

Houston didn’t pick until the third round, but it was well worth it. With one of two third round picks, the team selected Davis Mills out of Stanford. He could end up being the successor to Deshaun Watson, but will be the backup to start.

Mills’ potential is there and the Texans can use Watson to mentor him and mold him into a future starting quarterback. He makes great reads before the snap and should see some playing time in the pre-season at least.

Wallow was used as the team’s second pick in the third round. While the Texans could use another receiver to replace Will Fuller, the organization probably should have went defense here. Not to say that Wallow won’t pan out, but the defense also needed to be addressed more than it was. At 6’4″, Wallow is a big vertical threat and a developmental route runner.

Brevin Jordan being selected in the fifth round was a big surprise. Many thought he could end up going higher. The Texans need a versatile tight end that can catch and be effective in the pass blocking scheme. Jordan provides that and a lot more.

Houston had the chance to take a coveted tight end here, and they hopped all over the opportunity. It was a good pick by the front office, but also a surprise to see him fall so far in the draft.

Most Likely To Turn Heads During Training Camp: Nico Collins

Collins will end up being an exceptional receiver in Houston. He has the skills to work his way up the depth chart and have an immediate impact right away. The loss of Will Fuller in free agency opens up the room for another standout receiver to pair with Brandin Cooks and Randall Cobb.

Collins could be the one player from the Texans 2021 draft class that shines in training camp and ends up playing a more defined role than any of the other selected players.

The Houston Texans 2021 draft class is rounded out with Roy Lopez from Arizona. The defensive tackle was selected in the sixth round.

Lopez has a solid chance of making the team and could impress early on. He has great strength and a low center of gravity to help him be a solid one-on-one defender. Lope chases with good effort and will have to impress enough to have a role on the team this season.

Despite only having five picks, the Texans 2021 draft was an overall success. The team addressed what they needed to in order to be successful this season.