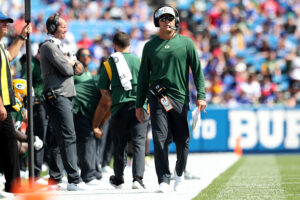 There were a lot of unknowns heading into this season in regards to the Green Bay Packers defense. The unknown didn’t have to do with a change in personnel, but instead, it came down to the person in charge of coordinating the defense. Head coach Matt LaFleur replaced Mike Pettine, who held the job for three seasons, with Los Angeles Rams linebackers coach Joe Barry. The change brought with it anticipation on how the defense would perform for 2021. If the season opener is any indication, it is going to be a long season for Joe Barry and the Green Bay Packers defense.

With Leonhard out of the picture, LaFleur turned to a person he was familiar with. Joe Barry and LaFleur both were on the Rams coaching staff for the 2017 season. There was no doubt that familiarity was a big reason that LaFleur chose Barry. But the hire wasn’t welcomed with open arms by Packers fans.

Going into Sunday’s matchup against the New Orleans Saints, many were watching to see what Barry would bring to the table as the defensive coordinator. One game doesn’t make a season, but there should be some concern from what fans witnessed on Sunday in Jacksonville against the Saints.

Against the Saints, the Joe Barry-led defense looked very similar to the defenses Mike Pettine coordinated. Except the Barry defense was missing the pressure that Pettine’s defense produced at times.

Without any type of pass rush, the Saints capitalized and made it a very long day for the Packers secondary.

Lack of Pass Rush Puts Secondary on the Spot

Saints head coach Sean Payton is one of the better play-callers in the NFL. On Sunday, he displayed why he is one of the best at what he does. He took Joe Barry to the woodshed all game long.

In his first game as the Saints starting quarterback, Jameis Winston shined against the Packers defense. Even without his top pass catcher, Michael Thomas, Winston went 14 of 20 with 148 yards, five touchdown passes, and zero interceptions. Without being rushed, Winston was allowed to sit in the pocket and pick apart the Packers secondary.

It is hard to lay all the blame on the Saints passing production on the Packers secondary. With the pass rush missing, the secondary were sitting ducks. Winston has struggled with decision-making in the past, especially when rushed. The lack of pass rush allowed Winston time to go through all of his progressions and make the correct decisions.

Heading into this season, the interior of the Packers defensive line seemed like a major weakness. Excluding Kenny Clark, the Packers have lacked quality play from their defensive line. That was once again the issue on Sunday against the Saints.

If Sunday was any indication, they are still in search of players to make a difference next to Clark. Dean Lowry continues to be a massive disappointment. Against the Saints, Lowry was the invisible man. Even with being blocked one on one, Lowry failed to do anything to help the Packers. The only time his name was called was when he jumped offsides on a fourth and goal play.

Lowry wasn’t the only defensive tackle to fail to show up on Sunday. Kingsley Keke, who the Packers are very high on, put up a clunker of a game as well. He was non-existent on passing downs and only registered two total tackles on the day.

We have written many times here that if Tyler Lancaster is forced to play a lot of snaps, the Packers defense is in trouble. Lancaster saw quite a bit of snaps on Sunday and contributed two total tackles. If the Packers are forced to give Lancaster extensive playing time, the defensive line is going to struggle.

Offense Fails to Help Out their Defense

It has been said that a good run game can be a defense’s best friend. With that said, the Packers defense was missing their best friend on Sunday. Offensively, the Packers failed to run the ball; in fact, LaFleur never gave much effort to establish a run game. The Packers ran the ball just 15 times for 43 yards. Their leading rusher was AJ Dillon, who had 19 yards on just four carries.

Sunday was just the first time the Packers number one offense saw in-game action together. LaFleur chose to sit most of his starters this preseason and on Sunday, it showed.

The Defense will be Under the Microscope

Joe Barry was already facing some scrutiny before Sunday’s game. However, after how the Packers defense performed on Sunday, he will face even more.

It isn’t just the coverages and calls that fans will be watching, but how the defense performs in the coming weeks. Barry has been credited, right or wrong, for getting his players to play with energy. If the Packers defense continues their lackluster play, that energy talk will turn out to be just lip service.

Monday night’s match-up against the Lions will be a very big game for Joe Barry and the defense. If they throw up another clunker, many will wonder if LaFleur made a huge mistake by hiring Barry.