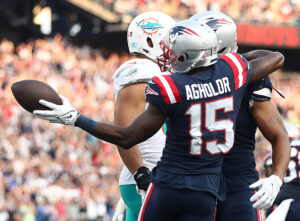 The first week of fantasy football action is in the books, which means it’s time for owners everywhere to scour the waiver wire for the best available Week 2 wide receiver claims. Looking around the league shows that players like Tim Patrick and Christian Kirk offer the best chance of positive production in the coming weeks.

Note that, in order to qualify for this list, the player needed to be available in 50% of leagues. Depending on the size of your league, there could be better options on the wire.

Perhaps K.J. Hamler makes that leap, but I am placing my bet on Tim Patrick. Patrick has played well when given the opportunity, and he was far more effective than Hamler during Week 1. While both players saw four targets, Patrick finished the night with four receptions for 39 yards and a touchdown. Hamler, meanwhile, recorded three receptions for 31 yards and no touchdowns.

Teddy hits Tim Patrick to give the @Broncos the lead! #BroncosCountry

Here we go again. Christian Kirk has been the subject of many a hype piece over the years, but he never quite lived up to expectations. So, of course, once everyone is over him, he goes and hauls in five receptions for 70 yards and two touchdowns.

This might be a one-week fluke, but Kirk has every opportunity to succeed. His college profile is fantastic, and Arizona desperately needs a second target opposite DeAndre Hopkins. A.J. Green clearly does not have it anymore, and Rondale Moore is just a rookie. Considering he is literally free, he is well worth a dart throw.

Michael Gallup is out for the next couple of weeks, which means Cedrick Wilson is going to see plenty of time on the field in one of the most pass-happy offenses in football. Dak Prescott looked great in his return to action and should only get better as his shoulder gets stronger.

Wilson is not as good as Gallup, but he has proven to be an NFL-caliber receiver. Considering Amari Cooper and CeeDee Lamb will steal most of the defensive attention, Wilson should be able to put up some solid numbers. Don’t expect week-winning performances, but he should be a decent flex play in deeper leagues.

Cedrick Wilson is on

After a rough 2020, the New England Patriots are once again incorporating the forward pass into their offense. Mac Jones has looked fantastic through the preseason and Week 1, although it is a small sample. If he can continue to play at this level, then there should be some fantasy opportunity for the pass-catchers.

Agholor had a great debut, and is the only player on the roster capable of stretching the field. Furthermore, Agholor and Jones did not play together in the preseason, so this connection could improve as the season progresses.