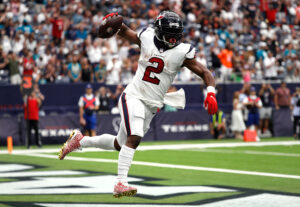 The first week of fantasy football action is in the books, which means it’s time for owners everywhere to scour the waiver wire for the best available Week 2 running back claims. Looking around the league shows that players like Elijah Mitchell and Mark Ingram offer the best chance of positive production in the coming weeks.

Note that, in order to qualify for this list, the player needed to be available in 50% of leagues. Depending on the size of your league, there could be better options on the wire.

Raheem Mostert suffered yet another injury during Week 1’s opening win against the Detroit Lions. As of this posting,  the severity of the injury is unknown. However, assuming he does not play next week, Elijah Mitchell is a must-add in all formats.

The sixth-round rookie has climbed the depth chart and is set for a starting role in Mostert cannot go. Any running back receiving touches in Kyle Shanahan’s system is going to have plenty of fantasy value, so go out and get him. And if you’re worried about Trey Sermon, don’t be.

The best strategy for fantasy football is to chase volume and hope efficiency follows. Ingram recorded a staggering 26 carries on Sunday, giving him one of the largest market shares throughout the league.

Part of this heavy workload was based on Houston’s favorable game script, and it’s safe to say this team will not be winning many games in 2021. That being said, a running back with this type of workload deserves to be rostered, even if it is just as a low-ceiling flex play.

Mark Ingram gets the first touchdown of the season for Houston. pic.twitter.com/C1Px9d9VFV

It’s only one game, but Mac Jones looks like the real deal. The rookie had a fantastic debut and seems to be much more willing to look for the check down than Cam Newton was a season ago. This is fantastic news for White, as he is set to see nearly all of New England’s running back targets. Rhamondre Stevenson could spend some time in New England’s doghouse after fumbling in Week 1, and Damien Harris is exclusively an early-down option.

There is only one Alvin Kamara, but the New Orleans Saints backup always carries some type of fantasy value. Sean Payton loves using two backs, and that second back is unquestionably Tony Jones

The undrafted free agent saw quite a bit of playing time in the season-opening win, and he should have a similar usage throughout the season. Additionally, he is one of the most valuable handcuffs in the league, as he would inherit a huge workload should something happen to Kamara.

Every week, I will try to include one player that should be available, no matter how deep the league. For the Week 1 running back waiver wire claims, that player is Kenneth Gainwell.

Miles Sanders has a strong grasp on the starting job, but Gainwell has already established himself as the primary backup. He touched the ball 11 times in his NFL debut and could easily earn a larger role as he becomes acclimated to life in the pros.