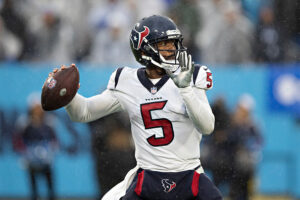 There are not many times that it’s recommended to play a Houston Texan but against the New York Jets is one of them. Tyrod Taylor has played very well this year in three of his healthy games. He’s scored at least 16 fantasy points in all three of those games and hasn’t thrown an interception in any of those three. Taylor’s one clunker came in his first game back from injury where he threw three interceptions. This past week he led the Texans to an upset win over the Tennessee Titans. In that game, Taylor only had 107 passing yards but he was able to pitch in two scores on the ground along with another 28 yards. That part of Taylor’s game is what makes Taylor very interesting for fantasy purposes. In those four starts, he’s up to 106 yards and three scores on the ground now. This week against the Jets, expect the good times to keep rolling for Taylor.

Let’s just call it like it is and say that it’s a rough week for running back streamers. The Jets normal starting running back, Michael Carter, suffered an ankle injury that will keep him out a few weeks. Ty Johnson likely won’t see the full workload as he’ll likely split with Tevin Coleman but Johnson seems like the likelier bet to see the majority of the passing game usage considering how he’s been used to this point in the year. He had been effective too as he saw a month-long stretch where he scored double-digit PPR points in all four games. This week’s matchup is a juicy one against the Texans. The Texans have been one of the worst teams and defenses this year and have allowed the tenth-most fantasy points to running backs so far. Assuming they don’t have another out-of-body experience like they did this past week, Johnson and the Jets should be able to find some room against them.

Fool me once, shame on you–fool me twice, shame on me. Fool me three times, well, that’s just rude and uncalled for. Laviska Shenault has fooled everyone twice so far. The first time was when he was one of the most hyped preseason sleepers. The next time was when D.J. Chark went down with a season-ending injury. Now Jamal Agnew, who had been being used as the primary slot weapon, is now also out for the year. It might finally be time that Urban Meyer uses Shenault correctly as a major slot weapon. This week will go a long way in seeing how he’s used moving forward. This week’s matchup against the Atlanta Falcons is a great one. The Falcons secondary is horrible and has allowed the eighth-most fantasy points to fantasy points to wide receivers this year. Shenault has all the talent he had heading into the year and maybe it just takes a while for him to capitalize on it.

With Jamal Agnew headed to season-ending IR, will Urban Meyer FINALLY use LaViska Shenault in that role?

Last week looked like it was going to be Cole Kmet week but that went poorly. Kmet had seen at least six targets in three straight weeks and running more routes than earlier in the season. Even the coaches were publicly stating how he’s been specifically designed more opportunities as he’s doing more things right. That did not come to fruition as he put up a stinker with 2.2 fantasy points, even without Allen Robinson. There’s a reason for optimism, however, and that reason comes in the way of a Thanksgiving Day date with the Detroit Lions. The Lions haven’t been specifically bad against tight ends but they are one of the least efficient pass defenses in the NFL. If Allen Robinson misses another game, Kmet could be utilized more as a weapon in the passing game and should be able to take advantage in this one.